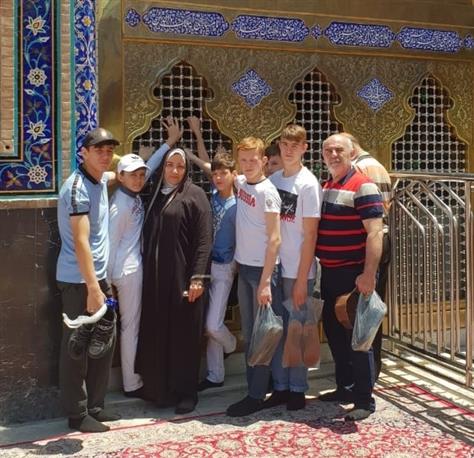 SHAFAQNA- AQR: A Muslim woman from Russia, who was the winner of grand prize of the “Family of 2017,” for the first time attended the holy shrine of Imam Reza (A.S), stating that pilgrimage to the shrine has been her biggest wish.

The instructor and reciter of the Quran, Gohar Mehr Aliyev, from the Siberian Surgut City says that she always wished to be in the shoes of the people who could be close to Imam Reza in his presence without intermediaries.

“Today, if we feel more spiritual, this is just for the sake of Imam Reza, and I have always wished that my children would be fond of the Infallible Imams (AS) and especially the compassionate Imam, because I believe the most reliable and the closest way to pray is to visit the Infallibles,” she said.

The Russian woman, who has brought up six Christian orphan sons, and then converted them to Islam, stated that apart from her two children, God gave her six other sons, all of whom after some time became Shia voluntarily and willfully and they accepted Islam through studying and research.

She stressed that their conversion was only God’s will, noting “God is forgiving and merciful, and I’m sure Imam Reza (AS) will accept us, and will accept our pilgrimage, and we will leave Mashhad hands full”.

In the end, the AQR Non-Iranian Pilgrim Affairs was in charge of hosting the Russian Muslim family, involving cultural programs and gifts, including a volume of the Holy Quran, several cultural products and books in Russian.

Photos: The Night of Qadr in the holy shrine of Imam Reza (A.S)

Palestinian President: Just like Manama workshop, Deal of century will not succeed