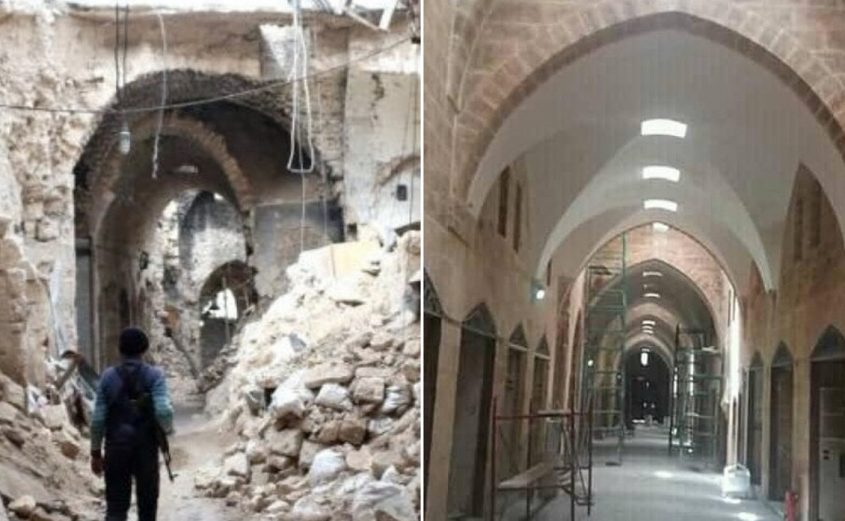 Syria’s ancient city of Aleppo was filled with bustling markets and historical buildings before it was engulfed in the devastating conflict. Now, before and after photos show progress in rebuilding its war-torn sites.

The reconstruction challenge is stark: In December 2018, the UN cultural agency UNESCO said 10 percent of Aleppo’s historical buildings had been destroyed, and as much as 60 percent of the Old City, a World Heritage Site, was severely damaged.

Renovations of one of the ancient markets in Old Aleppo. © SANAAfter

Damascus regained control over the whole city in 2016, some restoration work began – however, significant progress has been hindered from outside. While allies like Russia, Iran, and China have made investments in the country, reconstruction efforts have been complicated by sanctions imposed on President Bashar Assad’s government by Western countries.

Aleppo’s Great Mosque is being restored with the help of financing from the Chechen Republic’s Akhmad Kadyrov Fund pic.twitter.com/M1kaIWsMV5

Some locals finally began to enjoy the fruits of their labor by the end of March, when an Armenian church, Forty Martyrs Cathedral, hosted its first mass. Restoration work on the 14th century church began more than a year prior to bring it back to its former glory after it was damaged in April 2015 during shelling.

Renovations of one of the ancient markets in Old Aleppo. © SANAMajor

Progress can also be claimed by those involved in the effort to return the city’s incredible historical markets to their former glory.

Severely damaged Great Mosque of Aleppo, UNESCO World Heritage site, is being restored to former splendour with Russian help – and the rest of Syria will be restored, too! pic.twitter.com/ggp3kL3p2A

Citizens have also taken to the streets, quite literally, to lend a hand in efforts to rebuild and reconstruct their city.

Young men and women in Syria’s liberated Aleppo literally work day and night to restore the war-torn ancient city to its former state.

A continuing triumph over jihadist terrorism that mainstream media refuses to cover. pic.twitter.com/4u8q1JrlP2