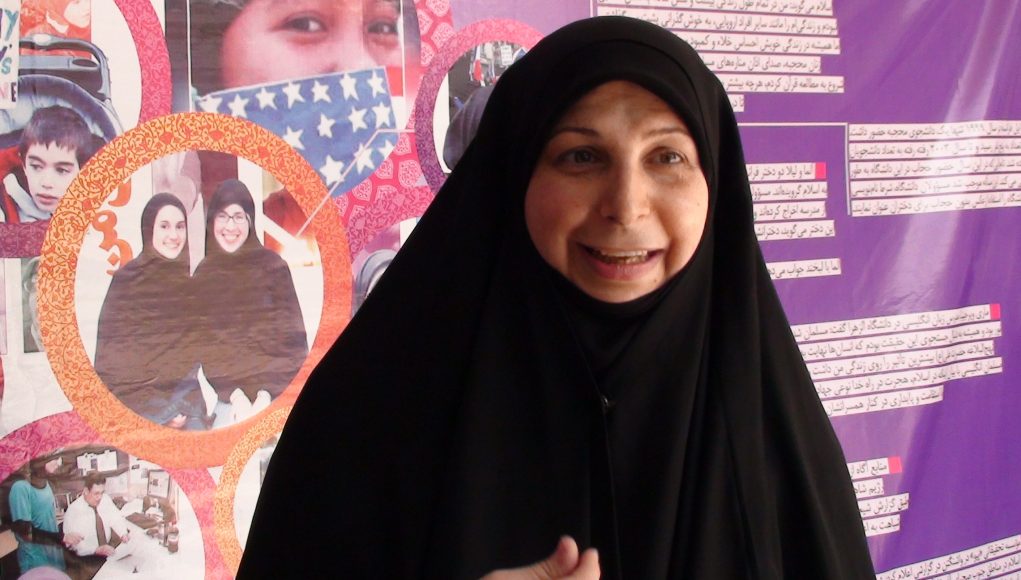 Shafaqna- Tell us about the Shia Muslims’ situation in Argentina? Do they live in equal conditions with followers of other religions?

Masuma Assad de Paz- Argentine Shia Muslims have integrated into their societies. The majority of them are of Lebanese or Syrian origin, whose parents or grandparents migrated to Argentina more than a century ago and they have coexisted peacefully with other people. They and other Argentine citizens share workspaces, universities and friends. In addition, they have their Islamic institutions shared with other Muslims. Despite this and although our law is the same for everyone, some forces undermine this coexistence by spreading unfounded accusations that harm Muslims in their day-to-day life.

Shafaqna- What problems and obstacles do Shias face and what do they need to do?

Masuma Assad de Paz- Although based on law, there is religious freedom in Argentina; Shia Muslims still face few challenges. There is great ignorance about Islam – which, in my opinion is not usual because every country should provide its citizens with knowledge about other religions. Anti-Islam prejudice that is fed by the media dominated by imperialism and Zionism, tries to portray Islam as the “new enemy”, it revolves around Muslim women and associates Islam with terrorism. Muslims all around the world fight with Islamophobia and Argentina is no exception, particularity after the 1992 attack on the Israeli Embassy in Buenos Aires and the 1994 explosion at the Amia Jewish center again in Buenos Aires, Muslims, especially the Shia came under attacks. These bombings had their own impact on the At-Tauhid Mosque and the Shia community; Muslims were attacked, injured or arrested by the police. In addition, Muslims were denied access to cultural, religious, economic and social exchanges they had with their countries of origin and with the Islamic Republic of Iran that had contributed so much to Argentine Muslims. It is amazing that after more than 20 years of these unfortunate events, they not only failed to find any evidence to link those attacks to Iran but Argentina’s legal system refused their so-called evidence for a proper trial. The legal dossiers related to the two bombings still remain open and from time to time new facts about briberies and contradictions surface about them.

Among the latest anti-Islam decisions taken by the current government is declaring the legitimate Lebanese political party Hizbollah as a terrorist organization. It is a provocation and a declaration of animosity against the Lebanese government and people. Based on this declaration, any Argentine citizen of Lebanese origin could be a suspect and may face legal problem just for keeping their links with their motherland. This year, two members of the Shia community were arrested in the run up to the G20 meeting. Both of them were released without any charge days later and their detention was announced as a “mistake”. Argentine Muslims are not used to such behavior and do not allow the authorities to manipulate them for the sake of other parties’ interests. Hence, there is a need to unify and organize Muslims and enforce the law to their benefit.

Shafaqna- What are the main questions the Shia in your country ask regarding their beliefs? What is the most urgent knowledge the Shia need to know?

Masuma Assad of Peace- Many questions are about Imam Mahdi, topics such as mysticism (Irfan), religious laws (Sharía), fasting are asked because many questions come to your mind when you live in a western country. In my opinion, it is necessary to pay attention to religious issues and educate Muslims from the most basics. I already mentioned many students that studied at At-Tuahid Mosque and later traveled to Qom to study and today they run our Islamic centers. However, things did not continue in this way and the mosque could not provide those who wanted to know about Islam with the same educational curriculum, so many of them decided to study in Qom and became religious and successful broadcasters of Islam. Shaykh Jalil Zevallos, Shaykh Abdullah Cerrilla were among this group of people. We have some friends who are now studying in Qom, such as Ezekiel Diaz, Mahdi Sinkari. This education strengthens ties within Shia families and with their society. I emphasize this because, although it is important to answer questions and people’s need in general, weather Muslim or non-Muslim, in reality it ends up in forming new relationships. Many times, we have to respond to questions that stem from the prejudice surrounding Islam; of course we have to do it, but it conceals the very light that Islam itself has to shed.

Shafaqna- You said that the issue of women should be set up based on Islamic tradition, how would it be applied in the West?

Masuma Assad de Paz- When I say that women’s way of thinking should be Islamic, I mean women are historically suppressed and feminism’s proposal to give women equality or eradicate discrimination against them, in fact, assigned more obligations on women while they lost many of their previous advantages. In this sense, I believe if a woman knows her rights, she may not use them but even knowing them would strengthen the family institution and the society. Implementing such Islamic values would not be easy in a western society, in principle because rights and obligations are by law, and Islamic legislation differs greatly from the Western law. Muslims should know their own law or Sharia, try to see its points of common and divergence from the Western law. They should know the tools that Islamic law provides for its application or adaptation. Among a Muslim woman’s right is that a woman can work at home without being obliged to do so, and if she does it, the husband will be indebted to her. If a husband dies, before the beginning of the inheritance process, she must be paid for the years she worked for the family and then the rest of heritage will be distributed among family members or children. Unfortunately, Western women believe they have gained rights and assume they are more advanced than Muslim women are, but in reality, Muslims do not envy Westerners and are not willing to give up the rights granted to them by Islam.

Shafaqna- How do the Argentines look at the Islamic Hijab?

Masuma Assad de Paz- Muslim female migrants wore hijab and maintained it during their lifetime. Unfortunately, the following generations did not pay attention to hijab like their mothers or grandmothers, in large because they lost ties with their motherland and were assimilated into the process of Europeanization of Argentina. I do not know if there was any anti-hijab legislation but I remember my maternal grandaunt, Dalal, who used to wear a turban until her death told me she could not attend school while wearing that turban and she used to take it out when she was inside the school. It is very likely that a legislation had banned hijab in educational institutions. Until the Islamic Revolution of Iran, Muslims knew nothing about the hijab. We had a Western conception of dress because we did not have Islamic or religious literature to teach us – and we thought it was an oriental custom. Reading Quranic verses about women’s modesty and hijab, was very important in raising Muslim woman’s awareness about herself and her family. In the beginning, we were not more than 4 or 5 women who started wearing hijab and it drew lots of attentions. It was not a form of social dress code in Argentina, some people used to ask why we were dressed like that, others thought we were nuns or made fun out of it and some thought we wore it because of illness. However, we did not give up on Hijab.

Today, in Argentina, Muslim women wear hijab and participate in the society and it is not strange any more. Anyway, there is still a long way to go if we want to talk about inclusion. Another challenge that appeared to me was when I wanted to renew my ID card in 2005 and based on their own interpretation of a certain regulation; my hijab-wearing photo was rejected. I made a complaint and called their interpretation a form of discrimination. Finally, not only they did accept my argument, but also the government emphasized on the nature of religious freedom in Argentina. Since then and the spread of news through the media, we received solidarity from different people even those who worked in media who considered that regulation “absurd”. The archbishop of Buenos Aires, who is now current Pope Francis, called our mosque to show solidarity and so did the Orthodox Jews who have been following this issue with interest because Jewish women also cover themselves. Finally, although there is no law to prohibit it, a resolution in 2011 declared hijab is allowed for legal documents. What I said shows there is no objection towards the Hijab on the part of ordinary people, but certain ideologies or interests oppose the use of hijab by female Muslims and they cause them problems in certain activities. For example, in the last Olympics, Iranian women faced resistance over their hijab in some competitions, and conversely, an Argentine gymnast refused to attend sports competitions in Iran for the obligation to wear hijab. For this reason, it is important to demystify intentional prejudice against Muslim woman and her dress and organize ourselves as the Union of Argentine Muslim Women (UMMA). Through its website www.umma.org.ar, UMMA, provides information about Islam in general and about Muslim women in particular.

UMMA is present in the Buenos Aires legislature on Women’s Day and Children’s Law Day. On both occasions, we manifest our daily sufferings as Muslim women. For more than three years, UMMA has been conducting a campaign in city’s squares in February, on the International Day of the hijab to disseminate hijab in Argentine society. This day has already been officially recognized in Argentina’s official calendar.

Shafaqna- At the end of our interview, do you have any comment for women of your country and other western countries?

Masuma Assad of Peace- My message to the women of the world is that Islam is the religion of balance at this world which is unbalanced in many ways. A woman must know her own value and fight to avoid oppositions, from every side, even from other Muslims. Therefore, it is necessary for Muslim women to know their rights and obligations and above all seek obedience to Allah. We must not only rely on our rights and obligations as Muslims but rise in spiritual degrees that will free us from all bonds. It is impossible if we do not improve our ethics. Human beings do not only need rights as the Prophet Mohammad (S) once said: I have been designated as a prophet to perfect moral standards.

Shafaqna– Thank you very much your time and interview with Shafaqna International News Agency.

“Islam is way bigger than what we think”: Interview with Masuma Assad de Paz (Part 1)

“I never heard anything as beautiful as recitation of Quran”: Interview with Argentinian Qari, Hussein Diaz

“The message of Islam is not very unfamiliar for Mexicans” : Interview with Latin American University Professor Ivan Carrazco

Pakistan’s concerning for fallout of possible war over Kashmir+ Video