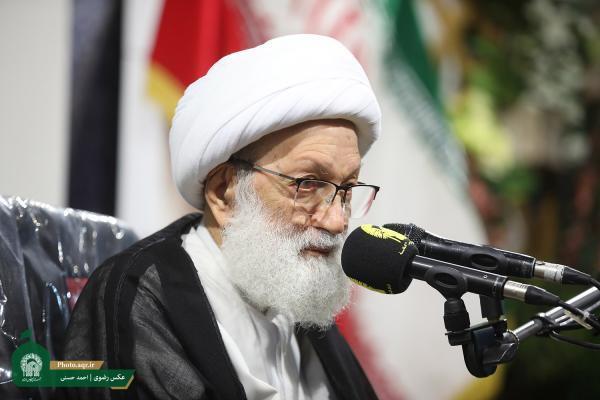 SHAFAQNA- Aqr: What supports the intellectual, scientific and religious authority of Muslims is the Infallible Imams’ school of thought and the Imamate.

The statement was made by Bahraini Shia leader, Ayatollah Sheikh Isa Qassim on the eve of Eid Ghadir in a ceremony at the holy shrine of Imam Ridha (AS), Iran. The ceremony was hosted by Astan Quds Razavi (AQR) Deputy Office for Non-Iranian Pilgrims’ Affairs and attended by a large number of Arab-speaking pilgrims in Ghadir portico of the holy shrine.

“God has created humans to achieve beatitude, and has placed the path to this happiness and perfection solely in his worship,” he said.

Pointing to the fact that God’s purpose for human creation is to show man the path toward sublimity, he said this can be accomplished through the worship of God. “Human nature seeks God essentially, and worshiping Him never ceases.”

Bahraini Shia leader stated that Imamate and prophethood are two necessities to save humanity and achieve spiritual perfection. “Human perfection is realized by the Prophets and then by the Imams.”

“After the Holy Prophet of Islam,” he recounted, “various sects claimed to know Islam and have complete knowledge of it; however, only those who rely on the Imamate know true Islam.”

He then stressed that Islam is not complete and true without the Prophet and the Infallible Imams; Islam that solves human problems is one, which came from God the Almighty and then entrusted to Prophet Muhammad (pbuh) and thereafter the Infallible Imams continue that path of light and this is the Islam that humanity needs.

“We are looking for a sort of knowledge that does not forget humanity, and is in line with the school of the Infallible Imams and the Prophet,” he reiterated.

Wisdom of Imam Ali (A.S), the highest jurisprudential law
Touching on the only figures in whom the Divine mission and school are manifested and know the way to God, he called them Imam Ali (AS) and the Infallible Imams who are the only ones to revive human life through their knowledge, establishing the Divine commandments and the knowledge of God, and who speak the language of God.

He stated that Prophet (pbuh) did not give his knowledge to anyone except those who definitively knew the Quran and had a thorough understanding of it and Imam Ali’s knowledge is the one with highest wisdom and knowledge who charts for us the way of the world and the hereafter.

Next, he pointed to the Quran which is sent to inform and guide human beings to overcome their hardships, and that the Divine word by descending on the Prophet (pbuh) fulfilled the basic needs of man, and by his decrees made the truth clear to them.

He then went over the fact that everyone knew Imam Ali and they knew that he would never transgress the Quran in his stances. “No one dared claim that he is a liar; how dare they say that Imam Ali did not know the correct interpretation and understanding of the Quran’s facts, while the Sunnis have also testified he is the heir to the Prophet and he possesses the true understanding of Quran.”

Greatest injustice on earth is to cut off human contact with God’s Messenger
Emphasizing that Imam Ali (AS) guarantees the world, religion and the hereafter of human beings, the Bahraini Shia leader called the great task of the prophets and imams to bring people out of their darkness and lead them to the light to bring man to divine perfection.

Elsewhere in his remarks, he cited that the greatest injustice on earth is to cut off human contact with the Prophet (pbuh), and to deprive the Islamic nation of this blessing and if the Muslims think carefully, they will also understand that abandoning Imamate will deprive them of the true Islam and the Divine religion.

“After the appointment and pledge of fealty to Imam Ali, God the Almighty completed their religion, and in fact these are the true essences of Divine blessings, and without them blessings are incomplete,” he enunciated.

Abandoning Hajj and prayers and their consequent elimination of religious obligations was another point made by Isa Qassim. “If it was not for Imamate, all systems in Islam and humanity would be destroyed, and when the people are in the path of prophethood, they will reach the ultimate goal.”

In the end, the Bahraini Shia leader said the prerequisite for maintaining dignity, solving problems and reaching goals is acting upon the Holy Quran, which only can be carried out when the savior of humanity, Imam Mahdi (AS) reappears.

10,000 Muslims to march in Cologne against terrorism 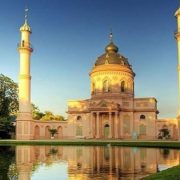 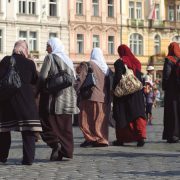 Muslims communities of migrants are on uncertain ground in Europe 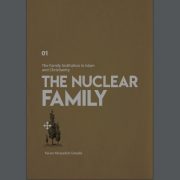 English books on parenting and family from Islamic & Christian perspectives 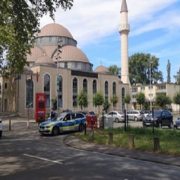