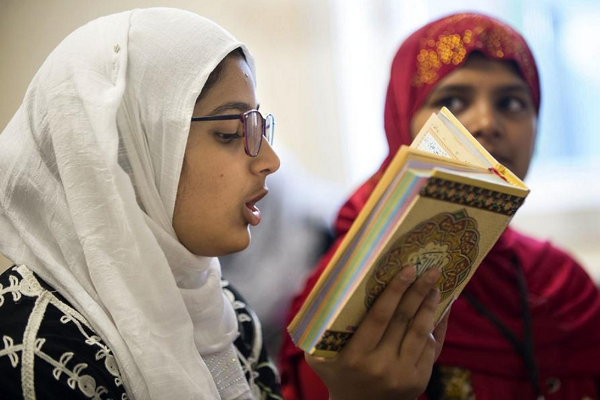 SHAFAQNA- Iqna: In a stuffy classroom, Suleiman Kaua, 12, took a deep breath and sat before a panel of three judges.

With a steady, rich voice, the seventh-grader from New Jersey began to read Al-Mutaffifin (the Defrauders), the 83rd Surah or chapter of the Quran from memory. When he bounded back into the hallway a few minutes later, he was immediately surrounded by a group of boys who had been waiting.

“I only made one mistake,” said Suleiman, grinning, to a round of high-fives.

Suleiman was competing in the fourth annual New England Qira’atul Quran Competition Saturday, held at the Islamic Center of Boston in Wayland. Approximately 150 Muslim students, ages 6 and older, came from across Massachusetts and beyond to participate.

All proceeds benefited organizers Helping Hand for Relief and Development, a Michigan-based nonprofit that responds to emergency and disaster situations around the world.

It drew the largest number of pupils ready to test their memorization of the Quran, Islam’s holy book, since the competition was first held in 2015, said Humayun Kabeer, the group’s New England Regional Coordinator.

“The Quran, it is basically our way of life. It has everything and anything to do with life in it,” said Kabeer. “It’s a challenge and sometimes people shy away from it. So, we started this competition to get the youth closer to God, closer to the Quran.”

According to Muslim tradition, the Quran was first revealed to Prophet Muhammad (PBUH) by angel Gabriel, who recited verses to him over about 20 years. He recited those verses to a growing group of followers in Mecca.

For centuries, Muslims have believed the best way to preserve the meaning of the book is to memorize it as they believe it was first revealed.

Starting at 10:30 a.m., boys and girls filed into separate rooms and recited Surahs that were assigned based on a participant’s age group for several judges. After deliberations, the judges evaluated each recitation, with the highest possible score being 100. When the points were tallied, the top five finalists in each age group advanced to the next round: reciting onstage in front of parents, friends, and others. 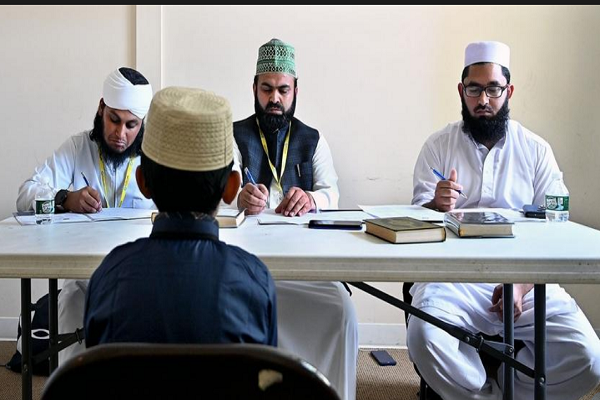 In the end, the three finalists from each gender in each age group were announced as the winners.

In one recitation room, a young girl bounced in to recite Surah Az-Zalzalah (The Quake). When she left, the three female judges praised her, saying her recitation “cuts right through your heart.” The next contestant, a 10-year-old wearing a dark blue hijab, started with the same verse, before she faltered and began to cry from nerves.

“There’s no need to cry,” judge Uzma Syeda told her. “And you tried, OK? You tried. You are such a brave girl.”

Judges said they weighed students’ memorization, confidence level and pronunciation of the classical Arabic. The most challenging part of reciting Quranic verses is Tajweed – reciting with a certain heightened melody.

“You can just read it, but with Tajweed, it goes right through your vessels and that’s what we’re looking for,” said judge Iman Dabbagh. “It’s not easy for everyone.”

Across the hall in a carpeted room, dozens of young girls practiced verses while they waited for their turn. Some whispered the words to themselves under their breath, while others chanted them aloud, rocking back and forth.

For 12-year-old Maria Siddiqui, there is the extra challenge of trying to commit the classic Arabic verses to memory when she does not speak the language.

“But it gets easier and easier if you just keep practicing,” said Maria, a student at Christa McAuliffe Charter School. “For a lot of us, we’ve been doing this since we were five.”

Sitting beside Maria, Maimoona Siddiqui, 11, waited to hear how she fared in front of the judges, but said she was not interested in winning.

“I wanted to see how far I’d come in the Quran,” said Maimoona, a sixth-grader at Walsh Middle School. “I do this only for me and Allah.”

Imam Wisam Sharrief, who traveled from Dallas, Texas, to be a guest judge at the event, stood by the window listening, as boys streamed in and out to recite. He said he’s memorized all 114 Surahs of the Quran, more than 6,000 verses.

“It’s all these little details, that’s when the symphony comes together. It’s what we spend a decade studying and then we judge these guys,” said Sharrief.

It was 14-year-old Muhammad Zain’s turn next. He sat down in front of the judges, bouncing a knee.

“Deep breath, chest in,” said Sharrief. “You know you are going to be fantastic.”

Photos: Representation of the arrival of Imam Hussain (p) with his family to Kerbela

A mosque in Hebron devastated by Zionist forces

USA: Eid Al-Fitr to be added to school calendar in Pennsylvania district