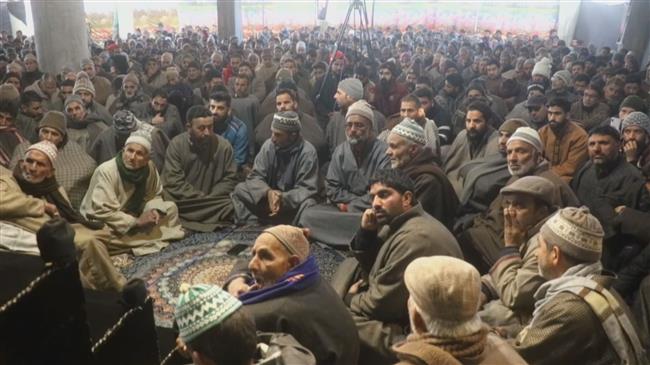 SHAFAQNA- Press TV: Despite intense cold weather, in order to commemorate the martyrdom anniversary of Hazrat Fatima Zahra (SA), the beloved daughter of Prophet Muhammad (PBUH),  people in Indian-administered Kashmir have gathered in large numbers to mark the occasion.

Religious scholars shed light on the life of Fatima (SA) and recalled her immense sacrifices and services in the path of Islam. They urged the Muslims especially women to follow her footsteps. The participants described Fatima as the best role model for not only the Muslims, but for people of all religions. The participants on the occasion also paid tributes to Lieutenant General Qassim Solemani who was assassinated by the US last week. They condemned Washington and called for justice.

On Friday, special prayers were held across the region for Solemani and other martyrs. The portraits of Solemani have been put up on buildings and streets to express solidarity with the Iranian nation. Like in other parts of the world, Solemani is being hailed here as a symbol of resistance and his popularity is transcending boundaries. People here believe that Solemani’s assassination will unite all anti-imperialist and anti-Zionist forces and would end the US hegemony in the West Asia.