SHAFAQNA – Josh Samman didn’t have a very good first round against Eddie Gordon. The middleweight winner of “The Ultimate Fighter” Season 19, Gordon used his strength and his wrestling to control Samman in the first.

But Gordon was loading up on every punch he threw, throwing from left field, and it guaranteed him a spot in the highlight reels for years to come.

As Gordon appeared to wind back to fire a right hand, Samman blasted him along the side of the face with a head kick during their bout at UFC 181 at the Mandalay Bay Events Center. Gordon went down as if he’d been shot and the fight was over in an instant.

“He seemed to struggle a lot with southpaws, so we watched tons of tape to see how to counter that,” Samman said after the fight. “That’s essentially where that kick came from and we trained to set it up time and time again.”FASTEST EVER KO:

t’s been a tough year for me. Tonight was easy compared to what I’ve been through and I can’t thank everyone enough for their support.”

It was unquestionably one of the best and most vicious knockouts of the year, but it also ranks up there with the sport’s best head kick knockouts ever. It was reminscent in many ways of a head kick knockout on TUF by Uriah Hall, who cold-cocked Adam Cella. 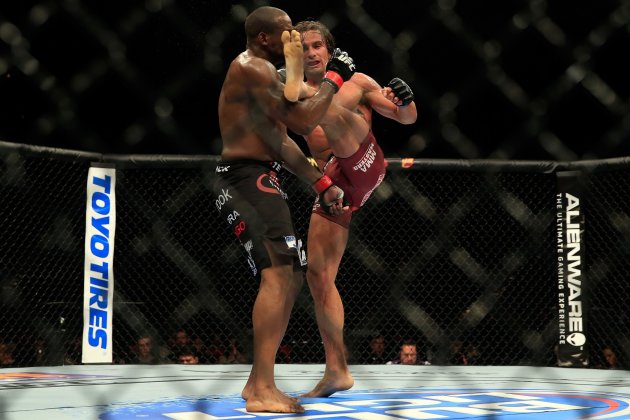