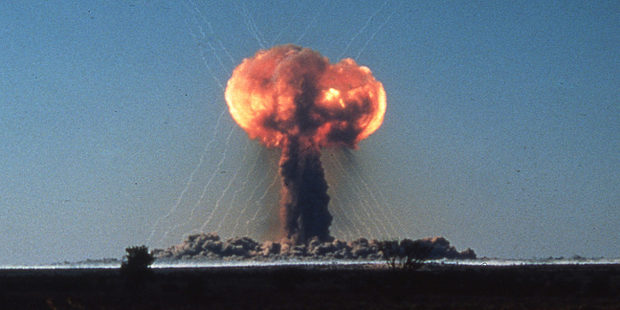 SHAFAQNA – The United States has added a ‘low yield’ nuclear weapon to its submarine arsenal in a controversial first in decades, after the Trump administration called for its deployment as part of the 2018 Nuclear Posture Review in order to “deter Russia”.

“Moscow, the argument goes, might have miscalculated that the United States was unwilling to use its nuclear weapons in response to a Russian low-yield nuclear strike because the existing U.S. weapons were too powerful,” The Hill reports.

“This supplemental capability strengthens deterrence and provides the United States a prompt, more survivable low-yield strategic weapon; supports our commitment to extended deterrence; and demonstrates to potential adversaries that there is no advantage to limited nuclear employment because the United States can credibly and decisively respond to any threat scenario,” he added.

Some Congressional Democrats have argued that the warhead, which is less powerful than the Hiroshima bomb, alarmingly lowers the threshold whereby the US would be willing the deploy a nuclear warhead against an enemy. Critics also see that the W76-2 is redundant given the current arsenal of lower-yield air-launched nuclear weapons.

The Pentagon, however, says such a deterrent which is not as powerful as America’s standard nukes but still has major destructive capability nonetheless, is crucial for dissuading enemies like Russia from engaging in limited nuclear conflict. US officials have underscored that such weapons will only be used in “extraordinary circumstances”. Advocates in the administration have also said the W76-2 launched from a submarine can more reliably penetrate air defenses compared to the more usual airplane launch.

Rood explained further in his statement:

“In the 2018 Nuclear Posture Review, the department identified the requirement to ‘modify a small number of submarine-launched ballistic missile warheads’ to address the conclusion that potential adversaries, like Russia, believe that employment of low-yield nuclear weapons will give them an advantage over the United States and its allies and partners,” according to The Hill.

Experts generally cited in multiple media reports suggest the ‘low-yield’ nukes’ destructive power may be about 5-kilotons, which is about one-third the power of the bomb dropped in Hiroshima, Japan at the end of WWII.

The Federation of American Scientists first reported last week they believe the W76-2 to currently be on the USS Tennessee Ohio-class ballistic missile submarine, which has been patrolling the Atlantic Ocean since the close of 2019. It’s believed to have been fitted atop Trident ballistic missiles on other among the Navy’s Ohio-class submarines as well.

A years-long push by activists has also sought to prevent broader deployment of low yield nukes in America’s arsenal. They see it as a dramatic step which makes nuclear escalation more likely and rapid.

“But we must not delude ourselves into thinking lower-yield nukes are more usable in a conflict,” because it remains that “Any use of this sea-based weapon – either first or second – will risk stoking the flames of conflict and escalating to all-out nuclear war.”

“A wiser response to an enemy’s use of one or two low-yield nukes would be to refrain from nuclear escalation while unleashing America’s ferocious and decisive conventional juggernaut,” Blair added.

Genetic mutations that may protect against Alzheimer’s discovered by scientists