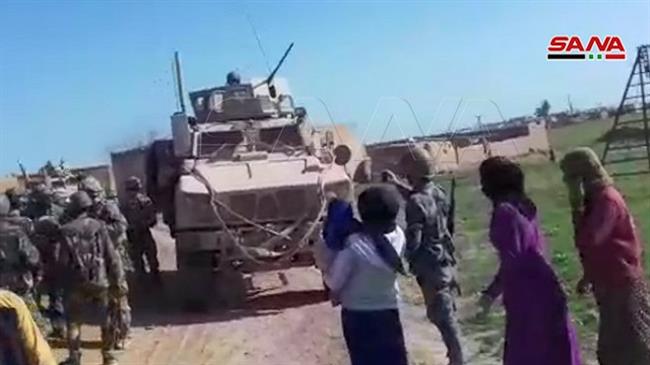 SHAFAQNA- Press TV: Syrian forces and groups of angry local residents blocked the way of a US military convoy, and forced them to retreat from an area in Syria’s northeastern province of Hasakah.

Syria’s official news agency SANA reported that Syrian army soldiers stopped the American convoy, consisting of 11 armored vehicles, as it tried to make its way through the village of Hamo in the al-Qamishli countryside of the province. Locals then threw stones at the American convoy and forced them to retreat. On March 8, government forces blocked a US military convoy of seven vehicles near the village of Kuzelia, which lies west of Tal Tamr town in the same Syrian province.

Local residents then pelted the American convoy with stones and cursed at the soldiers, forcing them to turn around and find another route. Two days earlier, locals at Rumailan al-Basha village in the same Syrian region had hurled stones at US troops as their convoy sought to drive through the area.

Elsewhere in Syria’s embattled northwestern province of Idlib, Turkish-backed Takfiri militants have infringed upon the terms of a ceasefire reached earlier this month by Ankara and Moscow to halt an escalation of violence there. SANA reported that the extremists fired rockets as well as bullets at army positions in Dadikh and Hantutin villages, which lie in the Saraqib and Maarrat al-Nu’man districts of the province respectively.

Syrian government troops responded and destroyed the militants’ hideout in return. A number of the terrorists were killed and injured in the process. Turkish Defense Minister Hulusi Akar announced on March 13 that the Russian and Turkish militaries had agreed on the details of a new ceasefire in Syria’s Idlib de-escalation zone following four days of talks in Ankara.

Akar said the first joint patrol by Turkey and Russia on the M4 highway in Idlib would take place on March 15, and that Turkey and Russia will set up joint coordination centers in the area. The announcement followed a telephone call between Russian President Vladimir Putin and his Turkish counterpart Recep Tayyip Erdogan the previous day to discuss the implementation of the agreements the two leaders had reached in Moscow the previous week.

“Vladimir Putin and Recep Tayyip Erdogan reaffirmed the importance of continued close joint efforts, first of all between the Russian and Turkish defense ministries, in order to ensure a stable ceasefire and further stabilization of the situation,” a Kremlin press release read. “It was agreed to maintain a regular dialogue at various levels, including personal contacts,” the statement added. 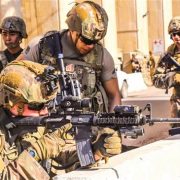 US officials: ISIS bomb brought down Russian Airbus A321