The surprise launch pits the firm against Microsoft, which completed its takeover of Nokia’s previous mobile-devices business in April.

The N1 tablet is due to go on sale in China towards the start of 2015, ahead of other countries.

Nokia said it was not making the device itself, but had licensed its brand, design and software to a third-party.

Taiwanese manufacture Foxconn is the licensee.

“This is a great product for Nokia fans and everyone who has not found the right Android tablet yet,” said Sebastian Nystrom, head of products at Nokia Technologies, who announced the product at the Slush technology conference in Helsinki.

One company watcher was startled by the move.

“I’m surprised how quickly Nokia has decided to do this. But equally if Nokia was going to do anything with its brand, it was going to have to do it quickly,” said Ben Wood, chief of research at CCS Insight. 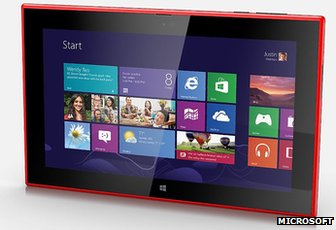 “The brand has been in a consistent state of freefall over the past three years, so if they are going to extract any value from it they needed to do it sooner than later.”

Microsoft sells Nokia-labelled kit of its own, including the Lumia 2520 Windows RT-powered tablet.

Earlier this month, it unveiled its first Lumia smartphone without the Nokia name. But it indicated that it would continue using the brand on its less powerful “feature phone” line-up, saying it had the right to do so for up to a decade under the terms of its $7.2bn (£4.6bn) takeover.

It is not clear whether Nokia’s announcement affects those plans.

“There’s no question Microsoft will not be a little frustrated that at a time when it’s trying to defocus the Nokia brand, here is something that resurrects it prematurely,” said Mr Wood.

“In some respects it will also cause a bit of confusion.”

The only comment from Microsoft was a brief statement: “This is a Nokia announcement and is not associated in any way with Microsoft.”

The N1 is a 7.9in (20.1cm) aluminium-framed tablet, whose design resembles the iPad Mini.

Unlike Apple’s device, however, it is powered by Google’s Android 5.0 operating system, features an Intel Atom processor and has a Micro-USB slot. The planned retail price is $249 (£159). 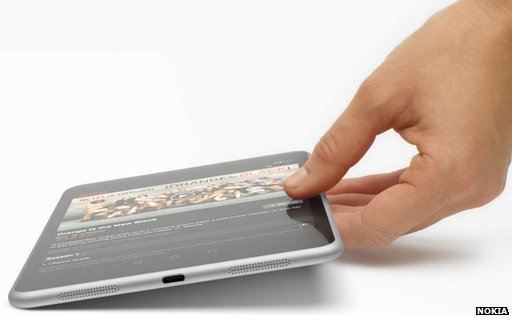 It runs Nokia’s own Z Launcher user interface – known as a skin – on top of Android.

The previously announced software allows owners to draw letters on the tablet’s screen with one of their fingers to search for related content and changes the apps presented on the machine’s home screen according to the time of day and the device’s location.

But, he noted, previous partnerships had not lived to expectation.

“The Symbian venture over a smartphone OS ran into the ground amid bureaucracy and differing partner visions,” he said.

“Nokia failed to establish successful licensing of its Series 60 software. The Intel partnership with Meego [an operating system] was aborted after just one year in as Nokia switched to Microsoft.

“And, Nokia has only just extricated itself from the choice of Windows Phone. Nokia must execute much better with licensing and mobile devices this time if it is to succeed.”

Nokia reported a return to health in October after it posted a third-quarter net profit of 747m euros ($935m; £597m) thanks to the work of its network equipment, mapping and software divisions, which had previously been weighed down by its loss-making hardware business.