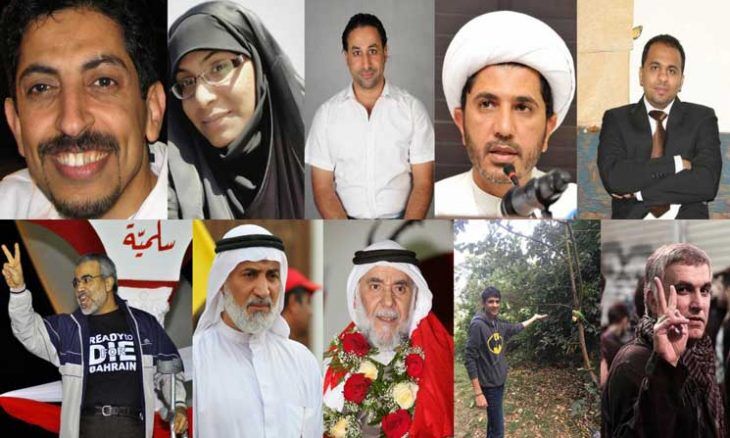 SHAFAQNA | By Leila Yazdani : There is an inevitable truth that COVID-19 virus could hit prisons and lead to consequences much more catastrophic. The increasing number of Coronavirus cases across the Middle East has sparked a wave of demands for prisoners across the region to be released from unsanitary and cramped detention centres, where the threat of virus contagion is rife.

As the virus plunged virtually every country into crisis and, Prisons across the world have become powerful breeding grounds for the Coronavirus, United Nations experts on detention, the World Health Organization and human rights activists have urged governments to reduce their prisoner populations swiftly to curb the spread of the contagion behind bars.

“In many countries, detention facilities are overcrowded, in some cases dangerously so,” Michelle Bachelet, the United Nations High Commissioner for Human Rights, said in a statement. “The consequences of neglecting them are potentially catastrophic”, According to NY Times.

Online, hashtags have been shared to raise awareness of the plight of prisoners in unhygienic conditions, a concern shared by human rights organisations, which have also been drawing attention to the vulnerability of prisoners, Middle East Eye told.

Ten members of parliament from various European countries such as Sweden, Denmark, and the United Kingdom have called on governments of the Middle East to release prisoners of conscience, where thousands of political prisoners are held in countries such as Egypt, UAE, Saudi Arabia, and occupied territories of Palestine.

The petition, published by the Danish Parliament website, was launched by Skyline International, a Sweden-based human rights organization. It reads, “We, the undersigned members of parliaments, call on our governments and the European Union to pressure governments in the Middle East to release political prisoners whose lives are at risk following the spread of the novel Coronavirus pandemic”, Mondoweiss told.

The death due to medical negligence in Saudi

Following the death of prominent Saudi human rights defender Abdullah al-Hamid in prison, Subcommittee on Human Rights Chair Maria Arena (S&D, BE) stated: “I am shocked to hear that one of Saudi Arabia’s leading human rights voices has passed away in prison at the age of 69, while serving an 11-year prison sentence.” Professor al-Hamid was a pioneer in advocating for Saudi Arabia to recognise the Universal Declaration of Human Rights and for reforms leading towards the establishment of the rule of law, including accountable institutions. He dedicated his whole life to fighting against harmful practices and to protecting all those defending basic rights and freedoms in his country, Europarl mentioned.

Marie Arena (Member of the European Parliament): We cannot accept the deaths of detainees in Saudi prisons, like Dr. #AbdullahAlHamid, and Saudi authorities must immediately release all prisoners of conscience.

Al-Hamid was “a pioneer” in advocating for Saudi Arabia to recognise the United Nations’ Universal Declaration of Human Rights, said Maria Arena, the Belgian chair of the European Parliament’s Subcommittee on Human Rights, Aljazeera told.

Prisoners of Conscience, a Twitter account which documents the situation of political prisoners in Saudi Arabia, declared that al-Hamid died due to “intentional medical negligence in prison […] he had a brain stroke and went into a comma for 15 days.” 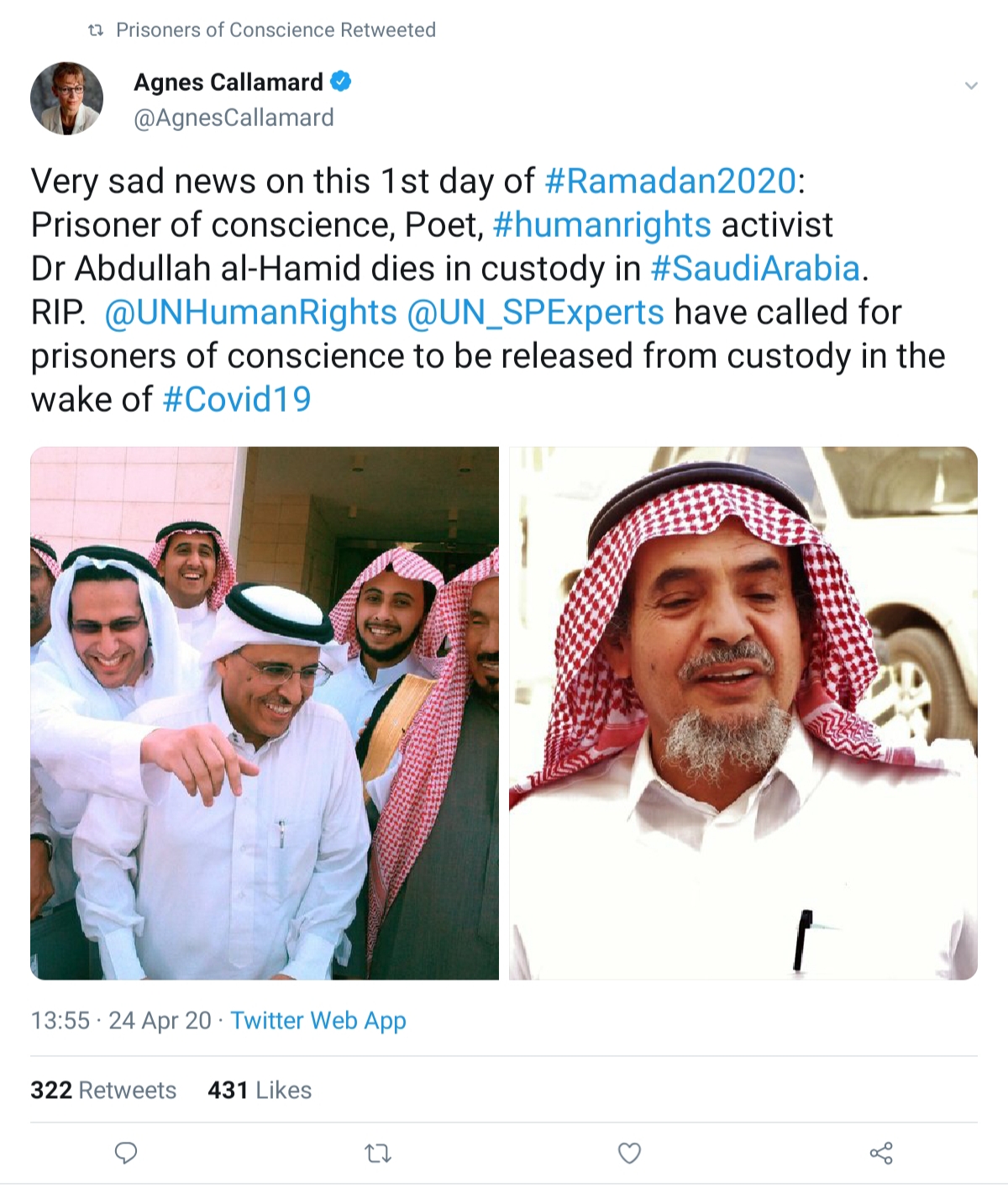 The Qatar-based Al-Jazeera news network, citing some human rights activists, also reported the death of al-Hamid due to “medical negligence.”

Amnesty in Norway holds its 101st protest in front of the #Saudi embassy in Oslo, calling for the release of Saudi prisoners of conscience, and this is a word from the director and activist @JohnPeder.pic.twitter.com/KNgmyVSfbK.

Palestinian prisoners lives are in danger

Palestinian children imprisoned by Israeli authorities live in close proximity to each other, often in compromised sanitary conditions, with limited access to resources to maintain minimum hygiene routines, according to documentation collected by DCIP. COVID-19’s impact is exacerbated by these living conditions making Palestinian children in Israeli prisons and detention centers increasingly vulnerable, Dci-palestine mentioned.

Defense for Children International – Palestine calls on Israeli authorities to take immediate action to release all Palestinian child detainees in Israeli prisons due to the rapid global spread of the novel Coronavirus (COVID-19).

Moreover, United Nations Secretary-General Antonio Guterres has demanded the protection of Palestinian prisoners being held in Israeli jails and detention facilities amid the novel Coronavirus pandemic. The UN chief has also asked his Special Coordinator for the Middle East Peace Process, Nikolay Mladenov, to remain in contact with Israeli officials to ensure that due attention is paid.

The Palestinian Islamic resistance movement, Hamas, has already warned about the dire consequences of keeping Palestinian prisoners in Israeli jails, denouncing the Tel Aviv regime’s utter disregard for local and international calls to release them amid the COVID-19 pandemic. 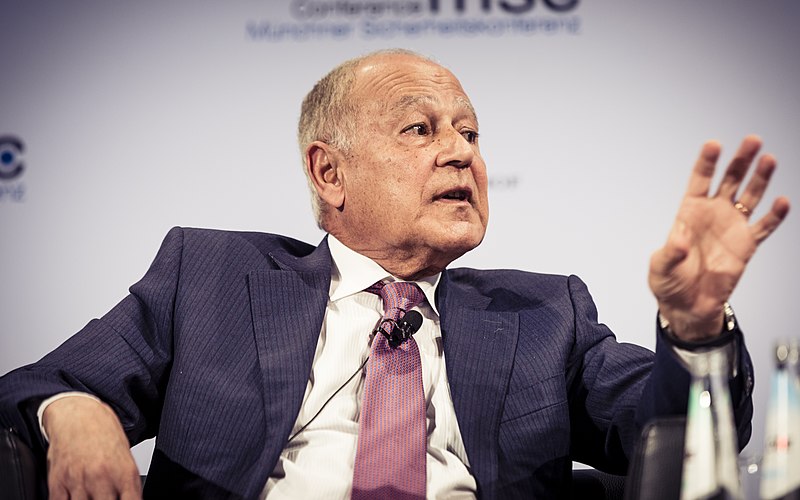 Secretary-General of Arab League, Ahmed Abul Gheit, in a letter addressed to Director General of International Committee of the Red Cross, Robert Mardini, said Palestinians are subject to dangerous conditions in Israeli jails, pointing to the absence of specialists and medical devices to assist patients besides the lack of adequate ventilation and severe shortage of cleaning materials and other essential goods, Press TV reported.

Israel must release all Palestinian prisoners in vulnerable situation, including 183 children, 43 women and 700 detainees with pre-existing medical conditions https://ohchr.org/EN/NewsEvents/Pages/DisplayNews.aspx?NewsID=25822&LangID=E…

Many of the prisoners in Bahrain suffer from underlying medical conditions

Bahrain recently released a “significant portion” of its prison population as the country tries to contain the outbreak of Coronavirus. However, the Bahrain Institute for Rights and Democracy (Bird) has highlighted that many “prominent political leaders and human rights defenders” have been excluded from this policy and remain behind bars.

Sayed Ahmed Alwadaei, director of advocacy at the London-based activist group, said there had been no transparency on the part of the government regarding the identities of those released, and that the majority of those freed seemed to be foreign nationals and Bahrainis held for criminal offences.

“By excluding prominent human rights activists, as well as vulnerable inmates and those declared arbitrarily detained, the government has missed valuable opportunity to demonstrate compassion during an unprecedented international pandemic,” Alwadaei said in a statement released.

Twenty international rights groups, including the Amnesty International and the Human Rights Watch, called on the Bahraini regime to release opposition leaders, political activists and journalists amid the Coronavirus outbreak, iqna told.

The statement said many of the prisoners of conscience currently jailed in Bahrain are old and/or suffer from underlying medical conditions.

“Such prisoners are at high risk of serious illness if they contract COVID-19, and thus ought to be prioritized for release,” it added, Press TV reported.

In Egypt, the hashtag “release the prisoners” (#خرجوا_المساجين) is trending, with activists and social media users using it to highlight the plight of the country’s thousands of political prisoners, as well as the unsanitary conditions they are living in, Middleeasteye told.

“Amid rising fears over the spread of coronavirus (COVID-19) in Egypt’s overcrowded prisons, the Egyptian authorities must immediately and unconditionally release all activists and human rights defenders detained solely for peacefully expressing their views”, Amnesty International said.

The authorities should also consider releasing pre-trial detainees and detainees who are especially vulnerable to the disease including those with underlying medical conditions and the elderly as a means to reduce the prison population and prevent harm. They should also consider adopting non-custodial measures for people accused of non-violent offences. 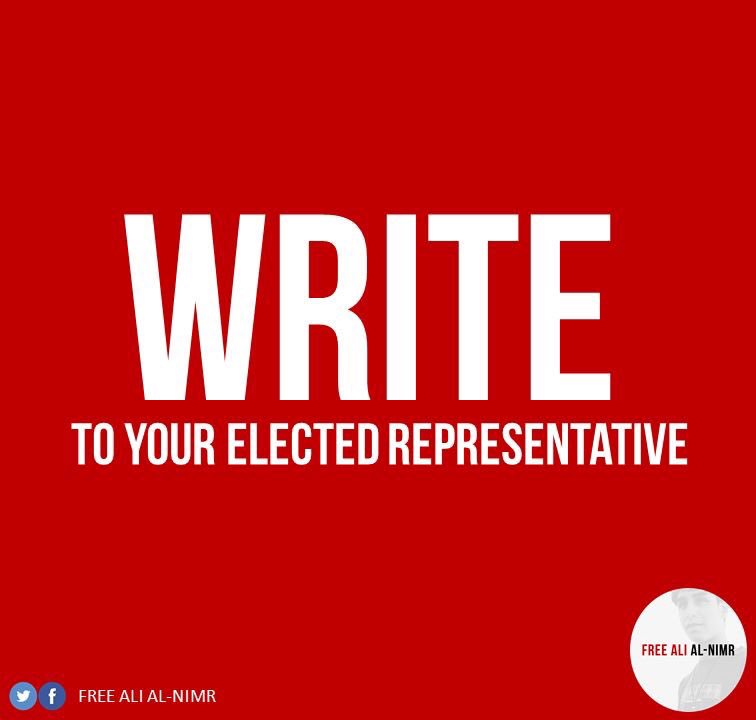 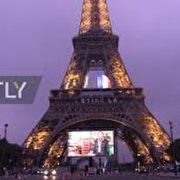 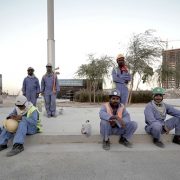 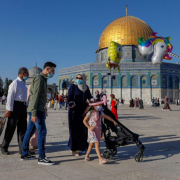