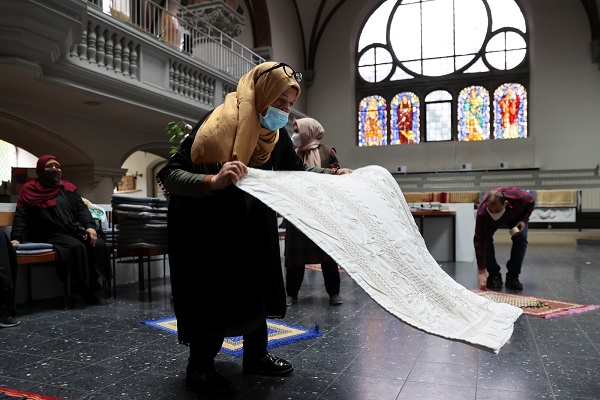 SHAFAQNA- Iqna: While the Dar Assalam Mosque in Germany’s Neukölln district which normally welcomes hundreds of Muslims to its Friday services, can currently only accommodate 50 people at a time under country’s coronavirus restrictions, during the holy fasting Month of Ramadan, the nearby Martha Lutheran church stepped in to help, hosting Muslim prayers in Arabic and German.

“It is a great sign and it brings joy in Ramadan and joy amid this crisis,” said Mohamed Taha Sabry, the Mosque’s Imam, who led his congregation in prayer watched over by a stained-glass window depicting the Virgin Mary, Reuters reported. “This pandemic has made us a community. Crises bring people together.” Places of worship reopened in Germany on May 4 after being shut for weeks under a coronavirus lockdown, but worshippers must maintain a minimum distance from one another of 1.5 meters (about 5 feet).

The church, a red-brick neo-renaissance building in Berlin’s Kreuzberg district could hardly offer a sharper contrast to the cultural center in Neukoelln where the Muslim congregation is accustomed to gathering. “It was a strange feeling because of the musical instruments, the pictures,” said worshipper Samer Hamdoun. “But when you look, when you forget the small details, this is the House of God in the end…”

The Islamic Council, an umbrella group of 400 mosques, said in April that many face bankruptcy because the closures stretched into the holy fasting month of Ramadan, usually a vital period for donations. The church’s pastor, Monika Matthias, said she had felt moved by the Muslim call to prayer. “I took part in the prayer,” she said. “I gave a speech in German. And during prayer, I could only say yes, yes, yes, because we have the same concerns and we want to learn from you. And it is beautiful to feel that way about each other.”

Muslims in Germany twice as likely as Christians to help refugees, finds survey 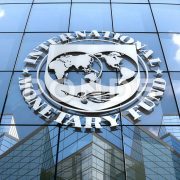 White House seeks to reassure US Muslims and Sikhs 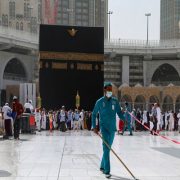 Saudi Minister says due to Coronavirus, all Mosques will be closed if necessary