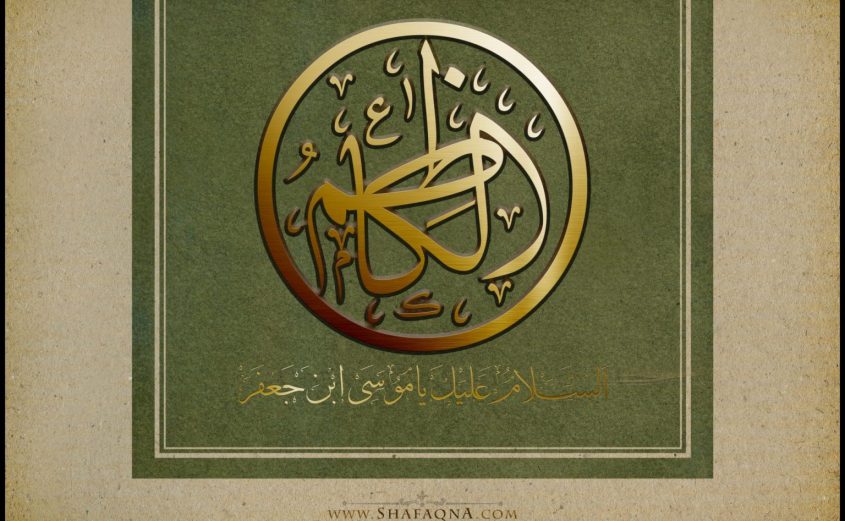 SHAFAQNA- Imam Musa ibn Jaʿfar (AS), the seventh Shia Imam, was born in 745 AD in Medina. He died in Baghdad in 799 AD. Yazid ibn Walid ibn ʿAbdal-Malik, Ibrahim ibn Walid ibn Abdal-Malik and Marwan ibn Muhammad of the Umayyad dynasty were in power during the Imam’s childhood.

After pasing away of Imam Al-Sadiq (AS), his son Imam Al-Kadhim succeeded him. The Abbasids had taken over from Umayyads. The Abbasids Saffah, Mansur, his son Mahdi and his grandsons, Hadi and Harun Al-Rashid also ruled during his lifetime. Imam Al-Kadhim first assessed the social conditions and the power of rulers before taking any action. Each the Imam had his own policy depending on the conditions, but the objective was to safeguard Islam.

The governor asked in the letter who he must behead! Mansur was infuriated and said: ‘Forget about their killing.’
By writing such a will, Imam Al-Sadiq (AS) managed to prevent the death of Imam Al-Kadhim (AS). Otherwise, he would have been murdered. Imam Al-Kadhim (AS) was 20 when he succeeded his father and Mansur’s letter to the governor of Medina describes how precarious the conditions were at this time. After evaluating the conditions, the Imam found that the best solution was to follow the intellectual revolution initiated by his father. To that end, he decided to train companions; the Imam had to be prudent because Mansur had hired many spies to find and kill anyone attaining prominence among Shia. (Rijāl Kashshī)

The Imam (AS) had no option but to push ahead with his mission through spreading Islamic teachings. Those who attended his courses wrote down whatever the Imam said. ‘In 148 after Hegira, the Imam Jaʿfar Sadiq passed away in Medina, but his school never closed and it preserved its blossoming under the leadership of his son, Musa Al-Kadhim (AS).’ (Mukhtaṣar Tārīkh Al-Arab). However, the Abbasid rulers used scholars in their employ to counter the views of Imam Al-Kadhim (AS), whose companions did not even dare to mention the name of the Imam in public. They used to refer to him as Abu Ibrahim, Abd Salih, Al-ʿAlim (‘The Learned One’), Al-Sabir (‘The Patient One’) and Al-Amin (‘The Trusted One’).

Despite all these problems, the Imam never abandoned his struggles and took great strides in training hundreds of scholars, some of whom are as follows:

Muhammad ibn Abi Umayr authored 49 books based on the teachings of Imam Al-Kadhim (AS). The ruler of the time, Harun Al-Rashid, was sure that the secrets political activities of Shia and their connections with the seventh Shia Imam were all under the control of Muhammad ibn Abi Umayr. He hired spies to keep tabs on him. The spies finally reported to Harun that Muhammad ibn Abi Umayr knew the names of all the leaders of the Iraqi Shia. He was arrested and tortured to disclose the names. He refused to reveal the names. He was stripped and received 100 lashes of the whip. (Rijāl Najāshī)

By adopting the correct policies, Imam Al-Kadhim (AS) managed to survive the reigns of Mansur, Mahdi and Hadi. The Imam was jailed under Harun, who was convinced that his efforts would fail as long as the leader of the Shia remained at large. After deciding to order the arrest of Imam Al-Kadhim (AS), Harun went to the Prophet’s (PBUH) Mosque and said: ‘O prophet! I apologize for the decision I have taken. I intend to arrest and imprison Musa ibn Jaʿfar and I fear that it may cause rift in the Muslim community and trigger bloodshed.’

The following day, Harun’s agents arrested the Imam while he was praying in the Mosque. In order to keep the Imam’s imprisonment secret, Harun ordered two howdahs to travel to Kufa and Basra. In this way, people did not know which howdah was carrying the Imam to prison. The Shia Imam (AS) served one year in the prison of Basra. Harun ordered the governor Issa ibn Jaʿfar to kill the Imam (AS). The governor refused and said he will set him free if Harun did not send anyone to take the Imam from there. Harun sent one of his agents to take the Imam from Basra to Baghdad. The Imam (AS) was jailed for four years before being poisoned in prison in Baghdad.

The Spread of Islam, From its beginning to the 14th Century