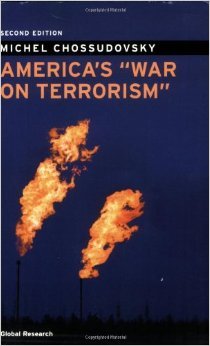 SHAFAQNA- Prof Michel Chossudovsky of Global Research  points out, if we ever hope to derail the never-ending war on terror, we must be absolutely clear that neither Al-Qaeda nor Saudi Arabia could have pulled off the attacks of that day.

“The tragic events of September 11, 2001 constitute a fundamental landmark in American history,  a decisive watershed, a breaking point.

Millions of people have been misled regarding the causes and consequences of 9/11.

9/11 marks the onslaught of the “Global War on Terrorism” (GWOT), used as a pretext and a justification by the US and its NATO allies to carry out a “war without borders”, a global war of conquest.

A far-reaching overhaul of US military doctrine was launched in the wake of 9/11.

9/11 was also a stepping stone towards the relentless repeal of civil liberties, the militarization of law enforcement and the inauguration of “Police State USA.”

In this new and expanded edition of Michel Chossudovsky’s 2002 best seller, the author blows away the smokescreen put up by the mainstream media, that 9/11 was an attack on America by “Islamic terrorists”.  Through meticulous research, the author uncovers a military-intelligence ploy behind the September 11 attacks, and the cover-up and complicity of key members of the Bush Administration.

The expanded edition, which includes twelve new chapters focuses on the use of 9/11 as a pretext for the invasion and illegal occupation of Iraq, the militarisation of justice and law enforcement and the repeal of democracy.

According to Chossudovsky, the  “war on terrorism” is a complete fabrication based on the illusion that one man, Osama bin Laden, outwitted the $40 billion-a-year American intelligence apparatus. The “war on terrorism” is a war of conquest. Globalisation is the final march to the “New World Order”, dominated by Wall Street and the U.S. military-industrial complex.

September 11, 2001 provides a justification for waging a war without borders. Washington’s agenda consists in extending the frontiers of the American Empire to facilitate complete U.S. corporate control, while installing within America the institutions of the Homeland Security State.