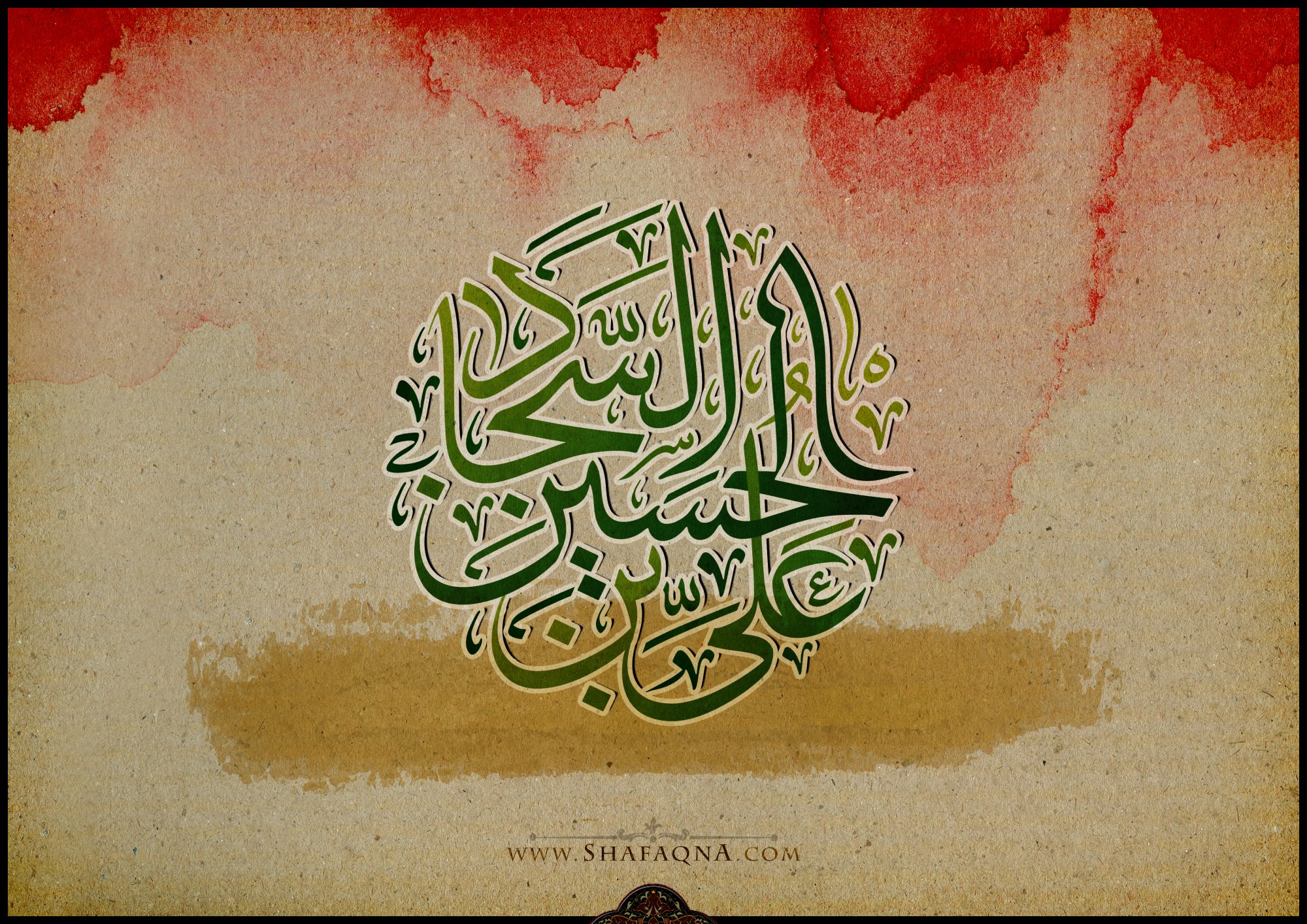 SHAFAQNA- The fourth Shia Imam is Sajjad (AS), the son of Imam Hussain (AS). He was born in 657 AD and passed away in 713 AD. Imam Sajjad (AS) was born at a time when his grandfather Imam Ali (AS) was still the Caliph and grew up when Muawiya was in power.

After the martyrdom of Imam Hussain (AS) in the Ashura uprising in 680 AD, God assigned Sajjad (AS) the mission to lead Muslims. He had to endure the reigns of Yazid ibn Muawiya, Abd Allah ibn Zubayr, Muawiya ibn Yazid, Marwan ibn Ḥakam, Abd Al-Malik ibn Marwan ibn Ḥakam and Walid ibn Abd Al-Malik.

Upon the ascension of Yazid, Abd Allah ibn Zubayr refused to swear allegiance to the new Caliph and fled to Mecca. After Imam Hussain (AS) was martyred in Karbala, Abdallah collected the people of Mecca and made a speech to them. After his speech, the people of Mecca declared that no one deserved the caliphate more than him and pledged allegiance to him. When he heard about this, Yazid had a silver chain made and sent to Mecca with the intention of having Walid ibn Utbah arrest Abdallah ibn Zubayr. But it was only many years of bloody warfare that his uprising was ended.

Imam Sajjad (AS) miraculously survived the events of Karbala. He was among the other prisoners of war taken to Kufa and then Syria. On the way to Sham, Sajjad delivered speeches in support of the Ashura uprising. Following a debate, Ubayd ibn Abdallah ibn Ziyad got angry and threatened to kill the Imam. In response, Imam Sajjad (AS) said:

“Are you threatening to kill me? Do you not know that death is something we are acquainted with and martyrdom is a dignity and virtue for us?” (Maqtal Khwarazmī)

The Imam was also threatened to death by Yazid following a debate; the Imam said in response:

“Never could freed-slaves like the Umayyads order the murder of the Prophets and their successors unless they abandoned Islam first. But if you are firm on your decision, bring me someone reliable so that I could delegate him the administration of affairs.” (Dharīʿat Al-Najāt)

Imam Sajjad (AS) never asked for mercy from Yazid and he only asked him to appoint someone reliable to lead the prisoners to Medina.

His speech in the Mosque of Damascus

It was not the only case the Imam (AS) heaped scorn on Yazid. In a general assembly, he exposed the corrupt nature of the Umayyads for all to see. He delivered a fiery sermon in the Mosque of Damascus and called on the people of Syria to overthrow Yazid. The sermon by Imam Sajjad (AS) followed a Friday Prayers sermon of praise for Yazid and his followers. Imam Sajjad (AS) said:

“You mercenary! You sold out people’s happiness and you won God’s fury. Your place is in the Fire!”

The Imam asked Yazid to take the podium and speak in a way that would please God. Yazid refused to do so. And when the Syrians asked Imam Sajjad (AS) to speak out, Yazid said: “They have sucked knowledge with milk since childhood. If they sit on the pulpit they will stay there until they humiliate me and Abu Sufyan’s family.”

The Imam finally agreed to deliver a speech. He began his speech by praising God and invoking blessings upon the Prophet. Then he started talking about himself and his family in a way he neutralized twenty-five years Umayyad propaganda:

“I am the son of he who submerged in his own blood and was killed with thirsty lips,”

Having heard this sentence, all listeners cried loudly. Yazid was scared and ordered a call for prayers in order to cut the Imam’s (AS) words. The Imam interrupted his speech in respect for the call for prayers. When the Muezzin was calling: “I testify that Muhammad (PBUH) is the messenger of God”, the Imam (AS) struck a coup de grace to the Umayyad. He turned to the Muezzin and said:

“Please wait a little in respect for Muhammad (PBUH).”

Then he turned to Yazid and asked:

“Yazīd! Is the Prophet (PBUH) your grandfather or mine? If you say he’s yours you would be lying and if he’s mine why did you kill his children and take his daughters prisoners? Why? Why?”

Frustrated with the Imam’s (AS) words, Yazid left the mosque. (Bahāʾi, Kāmil)

After his return from Medina, the Imam was facing tough restrictions imposed by the regime. He only contacted his close associates but still managed to train one hundred and seventy Companions. (Ṭūsī, Rijāl) The most prominent of these companions were Sa’id ibn Musayyib, Sa’id ibn Jubayr, Muhammad ibn Jubayr, Yahya ibn Umm Tawil, Abu Khalid Kabuli and Abu Hamza Thumali.

Through training such companions, the Imam became popular in the Islamic community and in the eyes of Umayyad rulers. During a Hajj pilgrimage, the Imam refused to salute Abd Al-Malik ibn Marwan and even frowned at him. Infuriated with this gesture, Adul-Malik held the Imam’s hand and said: “Look at me! I’m Abd Al-Malik and not the murderer of your father.” The Imam (AS) replied:

“I would never want to do such a thing! But I expect you to be in touch with us and to benefit from generosity,” said Abd Al-Malik. The Imam said:

“I don’t need your world or your properties.” (Biḥār Al-Anwār)

The Umayyad party’s heinous treatment of the Household of the Prophet (PBUH) furthered added to the latter’s dignity and elevated their status. During one Hajj pilgrimage, Hisham ibn Abd Al-Malik wanted to touch the Kaaba’s Black Stone but the throng of the pilgrims meant he could not reach it. So he sat down in a corner and watched. In the meantime, a handsome and slender man was stepping slowly towards the stone and everyone was stepping aside to let him advance.

The people of Syria, who were around Hisham, asked him who the man was. Hisham knew Sajjad (AS) well, but he claimed: “I don’t know him!” At this point, the famous Arab poet Farazdaq, who was present with the entourage, extemporised the following words in praise of Imam Sajjad:

“This man is he whose footsteps the desert soil knows. Kaaba and its surroundings are familiar with him. He is pious, clean and famous. The Black Stone would have fallen on earth to kiss his feet would it know who was going to touch it. Hisham! It is not significant at all when you claim you don’t know him. Arab and non-Arabs know him well.” (Kitāb Al-Aghānī)

Farazdaq’s poem was so powerful that Hisham became angry and ordered his arrest. The Imam then sent a message of sympathy to the poet. Although he detested the Umayyad rulers, Imam Sajjad (AS) never missed an opportunity to guide them. During the reign of Abd Al-Malik, the Christian Trinity was visible everywhere; the Trinity was pressed even on fabrics woven in Egypt, a Muslim territory. The Muslims objected to this practice and asked Abd Al-Malik to replace the Trinity with symbols of monotheism.

The Roman Empire heard about the request and demanded that Abd Al-Malik not allow any change in the Egypt-woven fabric. The empire threatened to mint coins emblazoned with insults to the Prophet if they did so. At that time, Roman-minted coins were used throughout the Islamic world. Abd Al-Malik sought assistance from Imam Al-Sajjad (AS) and the Imam suggested that they mint their own coins bearing the Islamic slogans; ‘I testify that there is no god but God’ and ‘Muhammad is the messenger of God’ engraved on each side. Islamic coins were minted and the economic clout of the Roman Empire was diminished. (Aʿyān Al-Shīa)

The Imam’s prayers and supplications

Sahifa Sajjadiyya contains fifty-four prayers – all narrated from the Fourth Imam (AS). This book also contains a comprehensive set of beliefs as, due to restricted freedom of expression, Imam Sajjad (AS) had to express his views about socio-political lifestyle in the form of prayers. Renowned Egyptian exegete Tantawi says: “Sahifa Sajjadiyya is the book with unique tips and teachings which are not found in other books. The Egyptians did not understand the value of this priceless manual…”

‘O God, bless Muhammad (PBUH) and his Household, appoint for me a hand against him who wrongs me, a tongue against him who disputes with me, and a victory over him who stubbornly resists me!’ (Ṣaḥīfa Sajjadiyah, 20)

The Sahifa also contains some scientific findings which the world was unaware of:

In the twenty-seventh Dua, the Imam (AS) curses the enemies of God:

‘O God! Mix their waters with pestilence and their foods with maladies, hurl down their cities, harass them with pelting, hinder them through drought, place their supplies in the most ill-omened part of Thy earth and the farthest from them, bar them from its fortresses, and strike them with constant hunger and painful illness!’

Commentary on Imam al-Sajjad’s (AS) treaties of right (Series)

The Right of Prayer: Commentary on Imam Sajjad’s (AS) Treaties of Right (Part 10)

Fr. Christopher Clohessy: Imam Ridha (AS) is an example of moral and noble leadership

History of the Shrine of Imam Ridha (AS) in Mashhad

Imam Hassan (AS): The paragon of forbearance and generosity