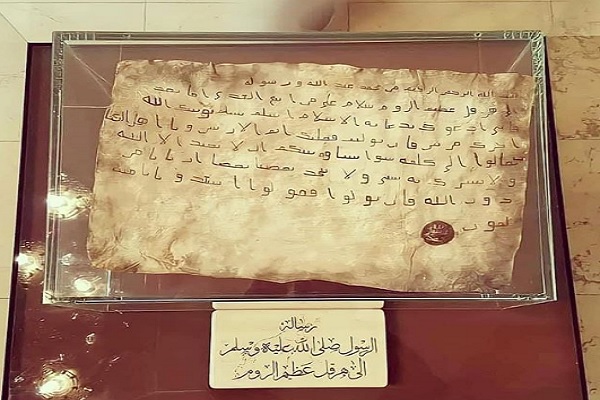 SHAFAQNA- The letter of the Holy Prophet (PBUH) to Heraclius, the Roman Emperor, in which he invited him to Islam, is kept in the King Hussein Mosque in Jordan.

The letter attributed to the Holy Prophet (PBUH) addressed to Heraclius, the Roman and Byzantine Emperor, is kept in the King Hussein Mosque in Jordan.

The full text of the letter is as follows:

In the name of God, the Beneficent, the Merciful

This letter is from Muhammad the slave of God and God’s Messenger to Heraclius, the Ruler of the Byzantines.

Peace be upon him who follows the right path.

I am writing this invitation to call you to Islam. If you become a Muslim you will be safe – and God will double your reward, but if you reject this invitation of Islam you will bear the sin of having misguided your subjects. Thus do I urge you to heed the following:

“O’ People of the Scriptures! Come to a word common to you and us that we worship none but Allah (SWT) and that we associate nothing in worship with God, and that none of us shall take others as Lords beside Allah (SWT). Then if they turn away, say: Bear witness that we are Muslims.”