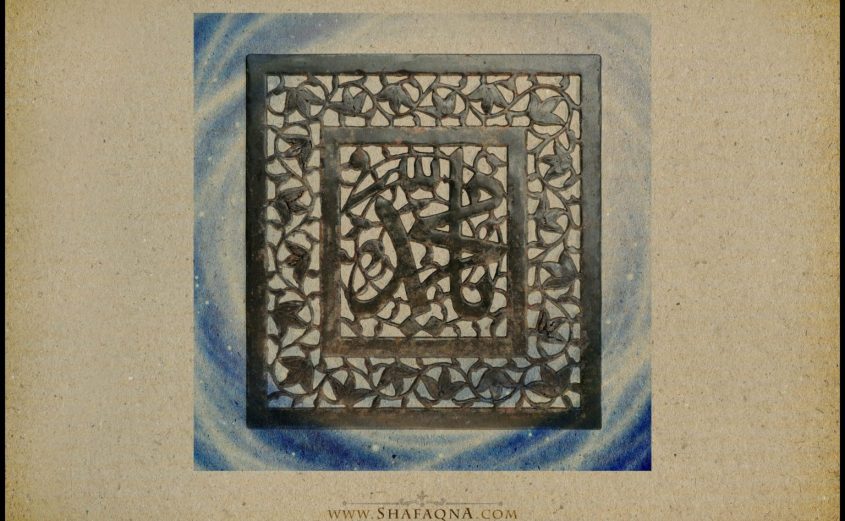 SHAFAQNA- As already mentioned, [after the demise of Prophet of Islam (PBUH)], the election of Caliph through a council of ‘Ahlal-Hall wal-Aqd’ or by the votes of the Helpers (Ansar) and the Emigrants (Muhajirun), was just for the sake of appearance and, in truth, such a process only took place in the case of one person. We will now investigate the mode of election of each of the early Caliphs as depicted in the annals of history.

Those present at Saqifah, formed a triangle whose sides each had their own agenda. Sa’d ibn Ubada had, with great labor, managed to unite the tribes of Khazraj and Aws under the title of ‘the Helpers’ (Ansar) so as to resist the Emigrants (Muhajirun) who were likely to turn out as winners. However, the unity between the two tribes was largely superficial and they remained distinct in their mentality.

Sa’d ibn Ubada, who belonged to the tribe of Khazraj, roused the Helpers with an impassioned speech, when he said: ‘You, the Helpers, always took the weighty burden of responsibility, and due to your efforts and power the headstrong and unyielding Arabs converted to Islam; the Prophet (PBUH) passed away being happy with all of you. Therefore, rise and take the control of power, since no one else deserves this’ (Ṭabarī 3/218).

In response to Sa’d’s stirring speech, Abu Bakr stated: ‘The nobility and high status of you, the Helpers, is as bright as daylight. However, while caliphate may be given to the tribe of Khazraj, but we should note that Aws are as qualified as Khazraj. Similarly, caliphate could be granted to Aws, but we see that that Khazraj are as qualified as Aws. Besides, there has been bloodshed between these two tribes, resulting in unhealable wound’ (Al-Bayān wal-Tābi‘īn 2/86).

Abu Bakr’s speech shattered the sense of unity among the Helpers and caused the two tribes, which were on the same side and fighting for the same goal only moments before, to become rivals. As a result, whenever either of them wanted to deliver a speech, he would dedicate his time to bragging about his own abilities and privileges. An awkward silence overwhelmed the assembly and the most critical moment in the history of this dispute arrived. Suddenly, Bashir ibn Saʿd, a member of the Khazraj and Saʿd ibn Ubada’s cousin, who disliked the status his cousin enjoyed amongst the two tribes, stood up, broke the silence and said: ‘The Prophet (PBUH) belongs to the Quraysh, hence his relatives are worthier than us to become successors.’

At that very moment, Abu Bakr, seeing the Helpers had lost their unity due to Bashir ibn Saʿd’s statement, rose and said: O’ people, in my opinion, Umar and Abu Ubayda are qualified and fit to be successors, so go and give an oath of loyalty to either of them. Surely, Abu Bakr’s approval of these two acted as a preliminary condition for Umar and Abu ʿbayda returning the favour by recommending Abu Bakr. And this is exactly what happened, as both Umar and Abu Ubayda approached Abu Bakr to give an oath of loyalty to him. For his part, Abu Bakr offered his hand without delay (Ibn Hishām, 2/599-60).

Asid ibn Hadir, the Chief of Aws, driven by excessive emotion, said to his people: ‘If Khazraj become caliphs, they will never give you a share of the power. Go and give a pledge of allegiance to Abu Bakr, as soon as possible.’ Those present in the meeting, following the instructions of their chieftain, pledged their loyalty to Abu Bakr. In this situation, a quarrel began, during which Saʿd ibn Ubada, who was sitting in the corner of the tent, was treated disrespectfully and even, by some accounts, trampled on. Meanwhile, Abu Bakr, quickly left Saqifah to announce that he was the people’s chosen successor. Thus, he became Caliph having received the votes of only five persons, namely: Himself, Bashir ibn Saʿd (of Khazraj), Asid ibn Hadir (of Aws), and Umar and Abu Ubayda (of the Emigrants). Meanwhile, the Khazraj present at the gathering, finding themselves defeated, began to cry out: ‘We will take an oath of loyalty to no one, but Ali’ (Ṭabarī, 3/202).

Such a hasty election, marked by tribal privileges, cannot be an ideal example of the succession council its proponents support. For this reason, Umar Ibn Khattab later considered this pledge of allegiance (bayʿa) ‘an error’ and said: ‘By God, the oath to Abu Bakr and his selection as Caliph was an error and an unsound deed, that was undertaken without consultation. But God saved the Muslims from its evil, and anyone who takes an oath of loyalty to someone without consulting with Muslims, his oath will not be valid.’ (Ibn Hishām, 2/658; Ṭabarī, 3/205)

How the Second Caliph was appointed

While the First Caliph was chosen with the votes of just a few people and gained the loyalty of others by offering them special privileges, the Second Caliph was appointed directly by the First. History tells us that when Abu Bakr was on his deathbed, he felt compelled to choose his successor. For this purpose, he called Uthman to write and document whatever he was going to say and then he ordered him to write: ‘This is Abu Bakr’s will to the Muslims…’ Before finishing the sentence, however, Abu Bakr fell unconscious. At this moment, Uthman took advantage of the opportunity and immediately wrote: ‘I hereby appoint Umar as my successor for you.’ When Abu Bakr regained consciousness, Uthman, quite daringly, recited for him the sentence he had just interpolated. Having realized what had happened, Abu Bakr became happy and justified Uthman’s action in the following manner: ‘Fearing that I would die and never regain my consciousness and that Muslims would be divided over determining the next Caliph, Uthman with quite good-intentions decided to write the name of Umar in my will as the next Caliph.’

In spite of the fact that the Caliph’s action was criticized by a number of the Prophet’s Companions, and even though Talha reproached Abu Bakr for having appointed a unkind man as the ruler, Abu Bakr’s response to the castigation was: ‘If God questioned me for what I have done, I would answer that I have given power to the best of the people’ (Ibn Abī al-Ḥadīd, 2/165).

Assuming that the foundation of caliphate was the council of notables (‘the people of loosing and binding’), why did the Caliph disregard this fact and appointed his successor? A number of thinkers who have found Abu Bakr’s actions at odds with their own theological principles maintain that Abu Bakr recommended Umar as a candidate for the Muslims to choose him (ʿAbdal-Karīm Khaṭīb, 288). But their account of the Second Caliph’s appointment makes no sense, especially considering the reaction of some Companions who said upon learning of the news, ‘You have fired such a poisonous and lethal arrow at us!’

The accession of the Third Caliph

Uthman acceded to the caliphate through a council of six members who were appointed by the Second Caliph. The structure of the council was arranged in such a way as to make sure that Ali would not be chosen as his successor. The members of the council were Ali, Uthman, Zubayr, Saʿd ibn Abi Waqqas, Talha, and Abdal-Rahman ibn Awf.

In the first stage, Talha and Zubayr (Ali’s cousin) stepped aside in favour of Uthman and Ali, respectively. Saʿd ibn Abi Waqqas voted for Abd al-Rahman (they were both from Banu Zuhra tribe). Only three people remained with equal votes. However, Umar said that the next Caliph could only be elected on Abdal-Rahman’s approval. At his time, Abd al-Rahman, knowing Ali very well and being certain that he would never violate (religious) principles for the sake of power, turned to Ali and said: ‘I will take an oath of loyalty to you, if you rule according to the word of God (The Quran), the Prophet’s tradition, and the practice of the previous caliphs.’

Imam Ali (AS) replied: ‘I will act according to the word of God, the Prophet’s (PBUH) tradition and my own knowledge.’ Having heard Ali’s (AS) response, Abdal-Rahman turned to Uthman and repeated his condition of approval, to which Uthman agreed. Then Abdal-Rahman took an oath of loyalty to him and hailed Uthman as Caliph. The Muslims’ and Islam’s future was endangered by choosing caliphs through a ridiculous council and in this way, their leadership developed into religious belief.

In the following Chapters, We will speak about Ali’s (AS) election through the Helpers and Emigrants taking the oath of loyalty. Moreover, we will show the legitimacy of this election and the fact that it was based entirely on the free choice of the voters, while the Umayyads and Abbasids each passed power to their own descendants like a ball. After the martyrdom of Ali (AS), Hassan ibn Ali (AS), received oaths of allegiance from his father’s army and became Caliph for a short time. Nevertheless, Muawiya’s machinations and plotting forced Imam Hassan (AS) to abdicate the caliphate for the greater good of Islamic society. Then, Muawiya, by means of conspiracy, violence and due to the ignorance of the people of Syria (Shaam) became Caliph and died in 60/679.

Following the death of Muawiya, Yazid ibn Muawiya, the most vicious and corrupt member of Abu Sufyan’s family, became Caliph and Commander of the Faithful (Amiral-Muminin). Even though he only reigned for a short period of time, his actions as ruler were so vicious that one would be ashamed to recount them. In the first year of his reign, Yazid murdered Hussain Ibn Ali (AS). In the second, the Battle of Harra took place in Medina, resulting in the death of some 700 of the eminent Helpers and Emigrants. In the third year, he sent an army to Mecca to fight Abdullah ibn Zubayr in Mecca. Yazid’s Army, which was positioned on the mountains above Mecca and dominated the town, launched stones and fire at the Holy Sanctuary and the Kaaba until it was burnt and its walls collapsed.

This event happened on Saturday 3rd of Rabi Al-Awwal 64/30th October 683. Eleven days later, Yazid died. After Yazid’s death and the two-month reign of his son, Muawiya II, the Marwanids came to power and, like the tribes of old, passed authority to their own descendants:

At the reign of the Marwanids ended in 132/750. Their wrongdoing was so widespread and infamous that the Islamic nation, through a series of uprisings, destroyed all the Marwanids, leaving no trace of them save their infamy and disgrace. We shall refrain from discussing the reign of the Abbasids here, but suffice it to say that their caliphate was also hereditary and lasted until 656/1258. It is worth asking now: Did the Prophet (PBUH) plan for kings to succeed him, carry out heinous oppression and still be considered by all people to be his true successors?