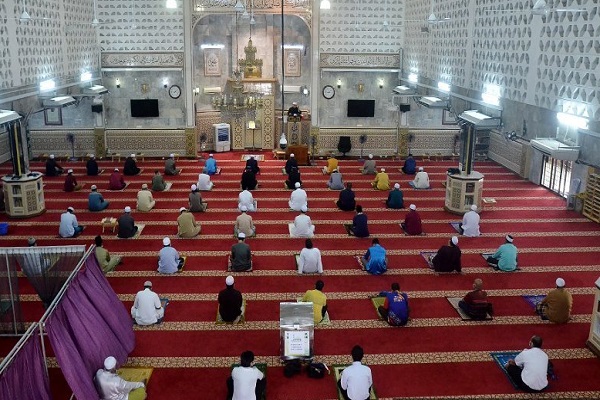 In Selangor, Friday prayer and the congregational obligatory prayers at Mosques and Surau in the state will be suspended during implementation of the 14-day MCO, starting Wednesday. However, for Mosques and Surau permitted to hold Friday and obligatory prayers, they are allowed to hold the prayers, but only five of the Mosque or Surau officials allowed for each prayer at one single time.

Online solemnization ceremony via video conferencing are only allowed for couples who have obtained permission to get married and the date of the marriage set by district Islamic Religious Office or Mosques concerned. In Sabah, Friday prayer at mosques and Surau in the state are suspended and will be replaced with Zohor prayer at home during the MCO period.

The Sabah Islamic Religious Affairs Department (JHEAINS), in a statement today said for now, only five committee members of the Mosques and Surau are allowed to perform congregational obligatory prayers. In Johor, Friday prayer and daily obligatory prayers are allowed to be performed at all mosques and Surau but the number of congregation is limited to 12 people only during this period. The Sultan of Johor, Sultan Ibrahim Almarhum Sultan Iskandar, in a statement uploaded on his official Facebook page said however, the 12 people are only made up of officers and committee members of each Mosque and Surau.

On the solemnization ceremony, the Ruler said it is only allowed to be held at the District Kadi Office and is limited to the bride and groom as well as Wali (guardian) from the same district. Permission will also be given to couples who have obtained the marriage approval before the MCO was enforced. In Penang, Deputy Chief Minister I Datuk Ahmad Zakiyuddin Abd Rahman, who is also Penang Islamic Religious Council (MAINPP) president said religious activities that involved the public including daily obligatory prayers and Friday prayer as well as marriage ceremonies at Mosques and Surau have been suspended.

However, he said the call for prayer or Azan would continue as per normal practice while, the five daily obligatory prayers would be performed by five people comprising the Imam, Bilal, Siak as well as two committee members of the mosques and Surau. Friday prayer would only be performed with the congregation number limited to 15 people, comprising officers and committee members of each Mosque, he added. In Kelantan, Mosques and Suraus in the state are allowed to hold the five daily prayers and Friday prayer with the number of congregation being limited to 50 people, during the CMCO period.

Tengku Temenggong Kelantan, Tengku Tan Sri Mohamad Rizam Tengku Abdul Aziz who is also Kelantan Islamic Religious and Malay Customs Council (MAIK) president said however said, religious activities such as religious talk or lecture at Mosques, Surau and Musalla were suspended during the period. In Kedah, all mosques and surau will only be opened an hour before call for prayers and one and a half hour before Friday prayer, during the CMCO period.

Kedah Islamic Religious Affairs Department (JHEAIK) director Mohd Yusri Md Daud said the number of congregation for Friday prayer and obligatory prayers in Mosques and Surau for the yellow and green zones in the state depends on the capacity of the prayer hall and subject to the one-metre physical distancing rule. For Mosques and Surau in the orange zone, he said the number of people allowed to perform the prayers is based on the size of the main prayer hall, after taking into account the one-metre physical distancing between them.

In Negri Sembilan, all Mosques and Surau in the state are allowed to hold Friday prayer and daily obligatory prayers during the enforcement period of CMCO. Mentri Besar, Datuk Seri Aminuddin Harun said however, the Mosque-goers must adhere to the stipulated standard operating procedures including wearing face masks, performing ablution at home and bringing their own prayer mats.