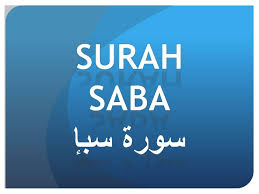 SHAFAQNA – In Ayah 46 of Surah Saba’, Allah (SWT) said: “Say: I do admonish you on one point that: In pairs, or singly rise up for the sake of Allah (SWT); and then reflect (within yourselves), your friend and companion (Mohammad (PBUH)) is not possessed, he is only a warner to you, in face of a severe (Divine) Punishment.”

It is also narrated from the sixth Shia Imam, Imam Sadeq (AS) who said: In this holy Ayah, singly (Forada) means Welayah. The narrator said: I asked Imam (AS): How is this possible? Imam (AS) replied: When the Prophet (PBUH) appointed Imam Ali (AS) by God’s Command, and said: “Whoever regards me as his/her Mowla, then Ali (AS) is his/her Mowla.”

A man stood up with taunting comments, said: Mohammad (PBUH) brings up new things every day and now he intends to force his family on us and make them our masters, then the above Ayah was revealed. And they asked: What does “Mathna” mean in that Ayah. Imam (AS) replied: “Mathna” in this Ayah means obeying the Prophet (PBUH) and Imam Ali (AS), and “Forada” means obeying infallible Imams (AS) from the Ahlul Bayt of the Prophet (PBUH) and Imam Ali (AS). Then, Imam (AS) added: Swear to God, there is no other point has been mentioned in this Ayah except what I explained to you [2].