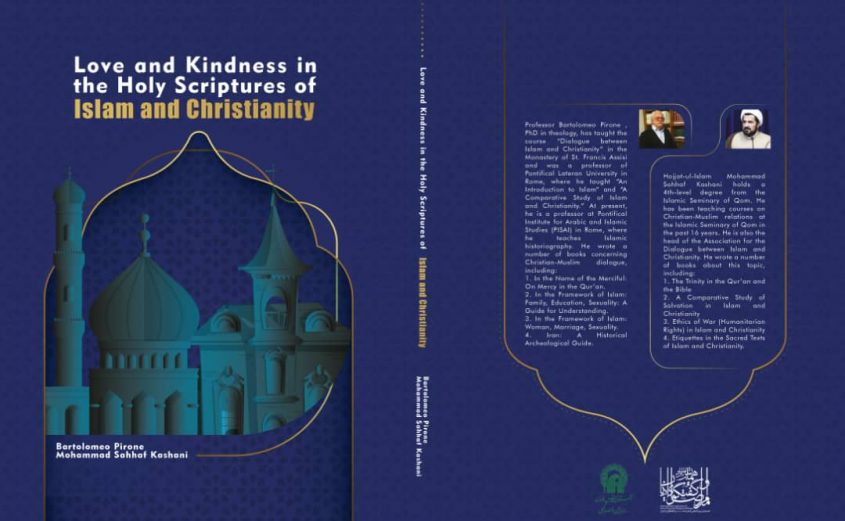 The work is published by the demand of “ International Conference on Imam Reza (A.S) and Interreligious Dialogue” by Astan Quds Razavi Publications.

Love is the common message of Islam and Christianity in Gospel…
“Whoever does not love does not know God, because God is love.”) 1john ( 4:8
“But love your enemies, do good to them (luke 6:35)”

In Islam also, God is Compassionate who ordered himself to be compassionate: “He hath inscribed for Himself (the rule of) Mercy” (Quran, 6:12) and all the teachings of Islam are summarized in love. In Islamic teachings we read, “هَل الدّين إلاّ الحُبّ” (Is religion other than love and compassion?) and is ordered not to withhold good deed and compassion even from enemies and non-Muslims: “Repel (Evil) with what is better: Then will he between whom and thee was hatred become as it were thy friend and intimate!”(Holy Quran, 41:34).

On the other hand,in Quran, God commands his Messenger to invite Christians and Jews to emphasize their common issues and said: “Say: O People of the Scripture! Come to an agreement between us and you” (Holy Quran, 3:64). So,one of the common messages of Islam and Christianity is love and compassion and this can be a common issue for synergy between Muslims and Christians.

Today, humanity is in urgent need of recognizing and returning to the “love” of this common message of the divine religions. To achieve a better world, human beings have filled the world in which we live with war, bloodshed, hatred, resentment, selfishness, and greed. The more intense this hatred, the more fragile peace, comfort, and security. While the man was not supposed to have such a fate.

God created man to love him, and man, in turn, does not withhold his love from others, and all are kind to each other.But man lost his way and imagined that the more he fought to show animosity, the easier his life would be. As a result, the situation is getting worse day by day. In the meantime, Islam and Christianity provided a prescription for human revival.

Ignoring these loving divine commands has caused mankind to distance themselves from the divine plan of salvation in life, and human beings to turn the world, which should be full of compassion and love, into a world of hatred and violence. That is why it is necessary for the true believers to draw kindness better and more beautifully by remembering the pattern of life.

Also, despite all the accusations against religions, it must be shown how God has instilled the spirit of love in all religions. But at the same time, each prophet introduces newer and more complete teachings about the tradition of love and kindness to humanity. Also, due to the wrongdoings of some so-called Muslim extremist currents, and the intense propaganda of the media, many Christians have made wrong judgments about Islam, and many Western thinkers accuse Islam of inherent violence.

Philip W. Sutton and Stephen Vertigans believe that the image of Islam in the West is portrayed as a “religion of the sword”, an image with clichés of “war, aggression, fundamentalism, and terrorism”. According to statistical studies by the “LifeWay Research Institute”, affiliated with the “Southern Baptist Convention”, two out of three Protestant pastors in the United States consider Islam as a religion of violence. Although this negative image is directly related to the violent behavior of takfiri-jihadi groups such as ISIL and al-Qaeda, it presents a false image of Islam.

The authors of this study sought to compare compassion and love in the sacred scriptures of Islam and Christianity to discover their commonalities and differences. This work has been written with the effective cooperation of the “International Institute of Shia and Peace”.

Professor Bartolomeo Pirone, Ph.D. in Theology, has taught the course “Dialogue between Islam and Christianity” in the Monastery of St. Francis Assisi and was a professor of Pontifical Lateran University in Rome, where he taught “An Introduction to Islam” and “A Comparative Study of Islam and Christianity.” At present, he is a professor at Pontifical Institute for Arabic and Islamic Studies (PISAI) in Rome, where he teaches Islamic historiography. He authored a number of books concerning Christian-Muslim dialogue, including:

This work has been written with the effective cooperation of the “International Institute of Shia and Peace”. The publication of joint works in common areas is one of the most important ways of interfaith dialogue and contemplation between Islam and Christianity, and the publication of this book shows the common understanding of its authors about the need for a serious interfaith dialogue between Islam and Christianity.