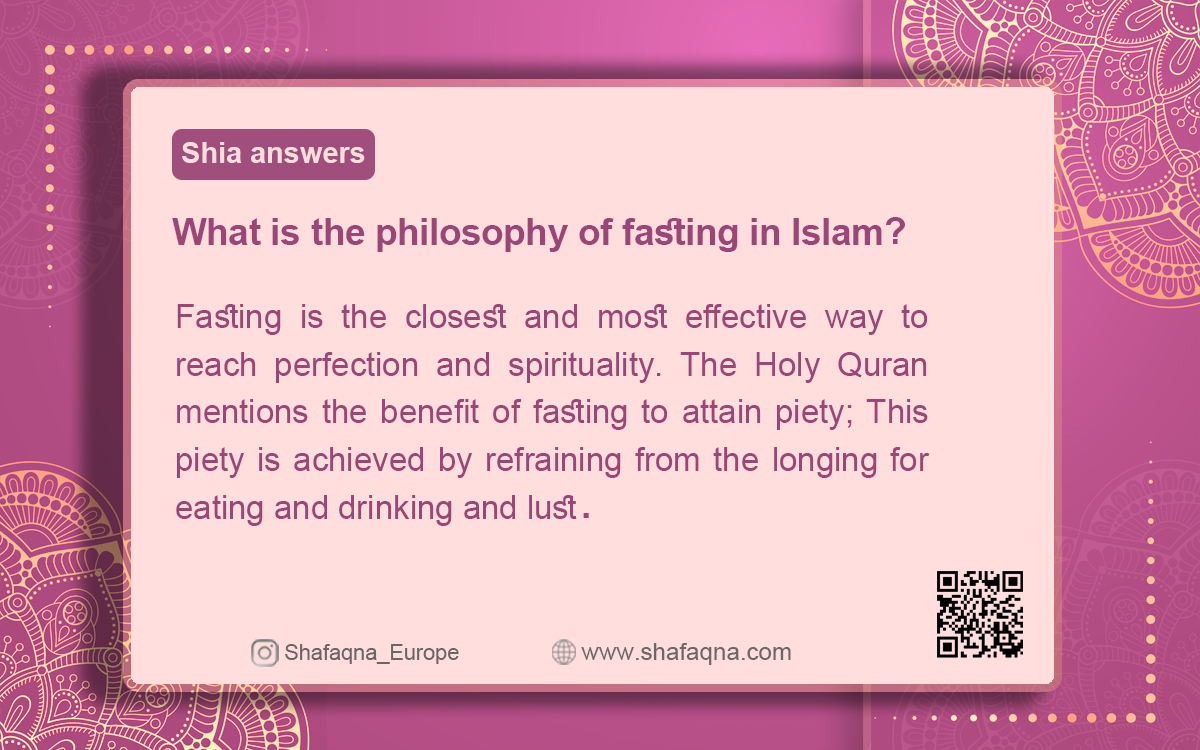 SHAFAQNA- What is the philosophy of fasting in Islam?

Short Answer: Fasting is the closest and most effective way to reach perfection and spirituality. The Holy Quran mentions the benefit of fasting to attain piety; This piety is achieved by refraining from the longing for eating and drinking and lust.

As the Quran in Surah Maryam (SA) refers to the fast of silence of Lady Maryam (SA). Fasting in Islam is on four types of Wajib (Obligatory), Mustahab (Recommended), Makruh (Reprehensible) and Haram (Forbidden). Ramadhan fasting is one of the obligatory fasts. In the Holy Quran, God states the ruling on the obligation of fasting as follows:

“O’ you who have believed, decreed upon you is fasting as it was decreed upon those before you that you may become righteous” (Quran 2:183) (1)

But there are various spiritual, personal and social philosophies for fasting, some of which are described below:

1- Strengthening patience and forbearance
The Quran, in a statement, calls on the believers to be patient and steadfast and says:

The exegetes believe that “patience” in the verse in question means “fasting”. (4)
Actually, fasting strengthens the spirit of patience in man and saves man from problems.

In a holy Hadith we read:

“Every act of the human is for himself, except for fasting – it is for God, and God rewards for it.” (5)

Some great commentators have explained this hadith that fasting is the only worship that is hidden from others until one states it; Unlike other worships that others see and this may lead to hypocrisy in that worship. That is why God has said that fasting is for Allah (SWT). (6)

It is narrated that the Prophet of Islam (PBUH) delivered a sermon on the last Friday of the Month of Sha’ban, one of the years, in order to prepare his companions to welcome the holy Month of Ramadhan, and expressed the importance of this month as follows:

“The sleep of a fasting person is worship, his silence is glorification (of Allah (SWT)), his prayers are answered and his actions are multiplied.” (8)

It has been narrated from the Holy Prophet (PBUH) in a Hadith that:

“It is upon you to fast, which cuts those veins (reduces lust) and cuts intoxication.” (9)

The Prophet of Islam (PBUH) in order to moderate sexual instincts and control lusts, he addresses the youth:

5- Peace of heart and soul

Fasting is one of the factors of calming and strengthening the human soul and spirit. Because not eating or drinking at a certain time by the order of the Creator of the universe is a kind of exercise to control lusts and instincts. It brings up the spirit of patience and piety so that it does not show impatience and turmoil in the face of adversity. Hajj also has an essential role in calming and strengthening the soul, so Imam Muhammad Baqir (A.S) has said:

“Fasting and Hajj calms the hearts of people.” (11)

6- Understanding the situation of the poor and needy

Fasting causes everyone to suffer from hunger and thirst, and this can be a ground for paying attention to the plight of the poor and needy. Imam Sadiq (A.S) says:

“Indeed, God made fasting obligatory to create equity between the rich and the poor. A rich man does not feel the pains of hunger to have mercy for the poor, since he is able to obtain whatever he likes. [By enjoining fasting] God wanted to put his creatures on an equal footing by making the rich taste the pain of hunger, so that he may pity and have mercy on the hungry…. ”(12)

7- Health and Zakat of the body

In various Islamic hadiths, fasting is mentioned as a factor for health; As the Prophet of Islam (PBUH) says:

And it has been narrated from Imam Ali (A.S):

“For everything there is Zakat and the Zakat of the body is fasting.” (15)

It should be noted that in the rules of Islam, two types of Zakat have been proposed: Zakat on the body, which is the Zakat Al-Fitr and is paid on Eid Al-Fitr, and Zakat Al-Mal (Zakat on property) which is the Zakat that Muslims are required to pay annually on wealth that includes: currency, gold, silver, and property. The result is that fasting is a divine command in the religion of Islam and the former religions, and God has made it obligatory on the general public due to its benefits and also as a deterrent to its prohibition against corruption.

Shia answers: Why should one fast on long days of the year which sometimes in some parts of the world reach 21 hours? Is there a solution to reduce fasting hours in these areas?