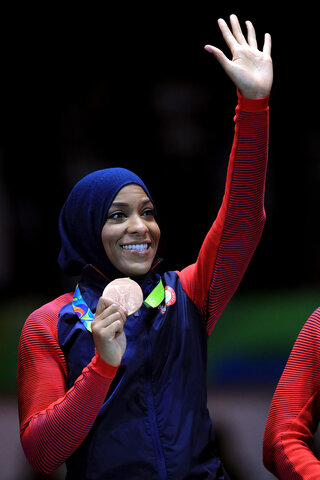 SHAFAQNA- Hawzah News Agency: The French upper legislative house voted in favour of amending the bill reinforcing the respect of the principles of the Republic to include the following sentence: “The wearing of conspicuous religious symbols is prohibited for participation in sports events and competitions organised by sports federations and affiliated associations.”

According to Telegraph columnist Faduma Olow, this can be regarded as a death knell of sports competition for young Muslim women wearing the Hijab. While the ban is being justified as a measure to advance women’s rights, it will have the opposite effect, Olow has warned. “Thanks to the new French law, girls across the country will be further excluded from all sports,” she claimed.

“France believes it is liberating Muslim women from a lifetime of oppression,” Olow said, adding that “this inferiority complex that Muslim women are assumed to suffer from is absurd, insulting and the complete opposite of empowerment.” “Forcing women to wear certain clothes is an abuse of power” but so is trying to “regulate women’s bodies” by banning them from wearing certain clothes, she added.

Banning the veil, a step backwards for Muslim athletes

Allowing the Hijab to be worn in sports would, in part, facilitate the emancipation of Muslim women by allowing them to reconcile the practice of sport with their personal convictions, Olow explained. A few have already worn the hijab whilst competing. This includes American fencer Ibtihaj Muhammad, who in 2016 became the first Hijab-wearing Muslim American woman to compete and obtain a medal in the Olympics, and UK’s Khadijah Mellah, who in 2019 was the first to win a horse race in the country. On World Hijab Day on 1 February, Muhammad praised on Twitter the “Hijab-wearing athletes breaking barriers and reaching their full potential through sport”.

‘No one will oblige us to take it off’

French female football players already protested the ban last year by creating a collective called Les Hijabeuses, stressing that “secularism is not intolerance” and demanding “football for all”. “Do I have to choose between my religious beliefs and the right to play my sport? “one of them asked in a video posted on YouTube.

“Nobody forced us to wear our headscarf, nobody will force us to take it off,” an activist from the Citizens’ Alliance, an association that supports the group, told EURACTIV in reaction to the Senate vote. The French football association’s ban would be “discriminatory, intolerant and unfair” and deprive “hundreds of people of the practice of their favourite sport in competition,” the collective deplored.

However, the tightening of the rules by the French Senate – described as Islamophobic by Ibtihaj Muhammad – is likely to worsen the situation. “Girls will be excluded and their participation in sport – already at a major disadvantage compared to Muslim boys – will suffer as a result of this regulation,” warned Olow. “The message is clear,” she continued, saying “Muslims are welcome, but their visibility is not. And again, it is women who will be most affected. ”