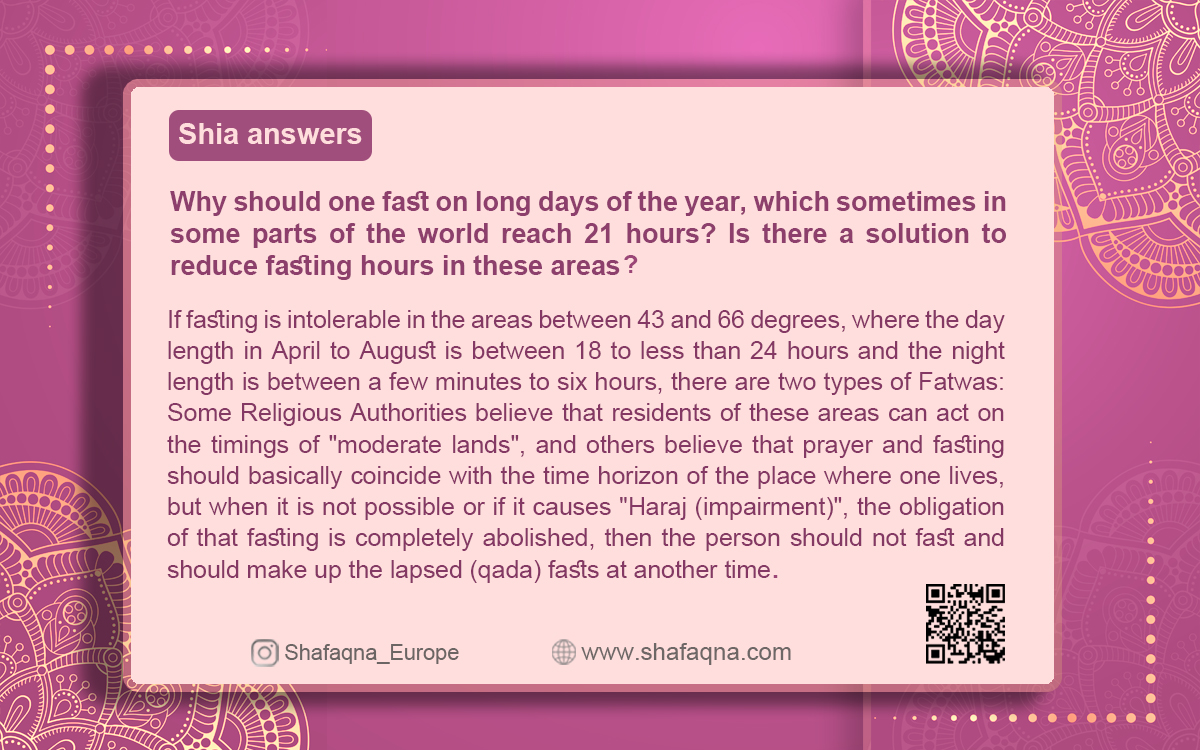 SHAFAQNA- Why should one fast on long days of the year which sometimes in some parts of the world reach 21 hours? Is there a solution to reduce fasting hours in these areas?

Short answer: If fasting is intolerable in the areas between 43 and 66 degrees, where the day length in April to August is between 18 to less than 24 hours and the night length is between a few minutes to six hours, there are two types of Fatwas: Some Religious Authorities believe that residents of these areas can act on the timings of “moderate lands”, and others believe that prayer and fasting should basically coincide with the time horizon of the place where one lives, but when it is not possible or if it causes “Haraj (impairment)”, the obligation of that fasting is completely abolished, then the person should not fast and should make up the lapsed (qada) fasts at another time.

Fasting in Islam is an act in which a person, in order to carry out God’s command, abstains from things that invalidate the fast, including eating and drinking, from the Fajr (dawn) Adhan (call to prayer) to the Maghrib (sunset) Adhan.

The Holy Quran explicitly mentions the time of fasting and says:

“…and eat and drink at night until you can discern the white streak of dawn against the blackness of the night; then (give up all that and) complete your fasting until night sets in.” (2)

Therefore, in the beginning, the start and the end of fasting are the same everywhere according to the local horizon, and the length or shortness of the day, as it does not interfere with the performance of Salah/Salaat (prayer), is not included in the principle of fasting. But it should be noted that all obligations have conditions for themselves that in the absence of those conditions, not only the obligation is eliminated, but may even become Haram. For example, fasting for the sick and anyone for whom fasting is harmful is not only not considered obligatory, but also is considered Haram. (3)

Therefore, in performing all the divine duties, it is necessary to assess the feasibility and observe the principle of any fetal or maternal condition that brings extreme difficulties (‘Usr wa Haraj), and these observances have a rational aspect before it has a religious aspect.

It is clear that it is intellectually impossible to do anything that causes hardship, because the aim of the task is obedience and submission, and this goal is violated by the “intolerable” task. This is the truth that the Holy Quran mentions in the verses related to fasting as follows:

In response to the manner of fasting in the mentioned areas, we say that the earth can be divided into three parts in the matter of fasting:

1. Areas with distinct day and night every 24 hours (lower than the Arctic Circle and higher than the Antarctic Circle, which usually does not exceed 17 hours during the day).
2- Polar regions (ie above the orbit of 66 degrees and 33 minutes north and south, which experience night for several continuous months and experience continuous daylight for several months).
3- Intermediate zones (ie between 43 to 66 degrees, where the day length in May to August is between eighteen and less than twenty-four hours and the night length is between a few minutes to six hours).

There is no dispute about the time and fasting of the first and second regions and there are clear Fatwas in this regard; however, regarding the issue of fasting in the third region which is in question, if fasting is intolerable in some seasons of the year, there are two different Fatwas:

A) Some, such as the Grand Ayatollah Makarem Shirazi, believe that the inhabitants of these areas can act on the horizon of “moderate lands” (such as Tehran or Cairo). (5)

B) Others, such as the Grand Ayatollah Khamenei, are of the opinion that, basically, prayer and fasting should be in accordance with the horizon of the place where one lives, but when it is not possible or causes “Haraj”, the obligation of that fast is completely abolished, so he/she should not fast and should make up the lapsed (Qadha) fast at another time. (6)

Accordingly, the text of the Fatwas of some Shia Religious Authorities in response to the question “Is there a way to reduce fasting hours in parts of the world where the length of the day sometimes reaches 21 hours?”, are as follows:

The Grand Ayatollah Seyyed Ali Al-Hussaini Al-Sistani: They should fast according to the same time, and if they are unable to fast, if for example they have a severe hardship due to the length of the day and the intensity of their thirst, according to the Obligatory Caution and with an Intention of Qorbat they should avoid actions that invalidate the fast until continuing to fast on them reaches that stage of hardship that they can not bear, in which case they can eat and drink, but according to the Obligatory Precaution in eating and drinking, they should suffice as much as necessary and not perform the Muftarat (things that break one’s fast) on the rest of the day; and if the inability to fast is due to harm, then the rule of being sick is considered on them and fasting is not obligatory for them, and if they can make up for it, their fast is obligatory, otherwise they should give about 750 grams of food per day, such as wheat, rice and etc to the poor.(7)

The Grand Ayatollah Seyyed Ali Khamenei: They should observe the same horizon of their residence regarding the times of daily prayers and fasting, but if fasting is impossible or difficult due to the length of the day, it is not obligatory to perform it but it is Wajib (Obligatory) to make up the lapsed (Qadha) fasts. (8)

The Grand Ayatollah Nasser Makarem Shirazi: In the case of fasting in areas whose day or night is out of the ordinary (for example, more than 18 hours), they should perform their fast according to the time in the Moderate Lands, for example, consider the same time in Tehran or Cairo as the length of day and night because those areas have sunrise, sunset and meridian, then adapt it to their horizon; In other words, if in that season of the year, in the Moderate Lands, the length of the day is 14 hours, they should also fast for 14 hours, which means that they have to start at dawn time in the Moderate Lands and fasts for 14 hours, and in winter, when the days of the moderate zones are, for example, 12 hours, they should start their fast according to dawn time there and fast for 12 hours (according to the example above), but if it is not difficult for them to fast completely, it is preferable. (9)

The Grand Ayatollah Hussain Vahid Khorasani: they should fast at its religious time (from the Fajr (dawn) Adhan until the Maghrib (sunset) Adhan), even if the day is long; And if in the middle of the day, fasting becomes so difficult that it is not traditionally tolerable, they can eat or drink as much as the difficulty goes away and fast for the rest of the day, and should make up the lapsed (Qadha) fast at another time. (10)

9. The website of the Gand Ayatollah Naser Makarem Shirazi: The rulings on the time of fasting in areas that have a long day.

10. The website of the Grand Ayatollah Hossein Vahid Khorasani: The ruling on fasting in a country whose day and night are unusual. Q. 28.

Shia answers: What is the philosophy of absence of Imam Mahdi (AJ)?

The Grand Ayatollah Sistani’s rulings on Zakat of Fitrah

What can be given as Zakat Al-Fitrah and how much for each person? The Grand Ayatollah Khameni’s answer