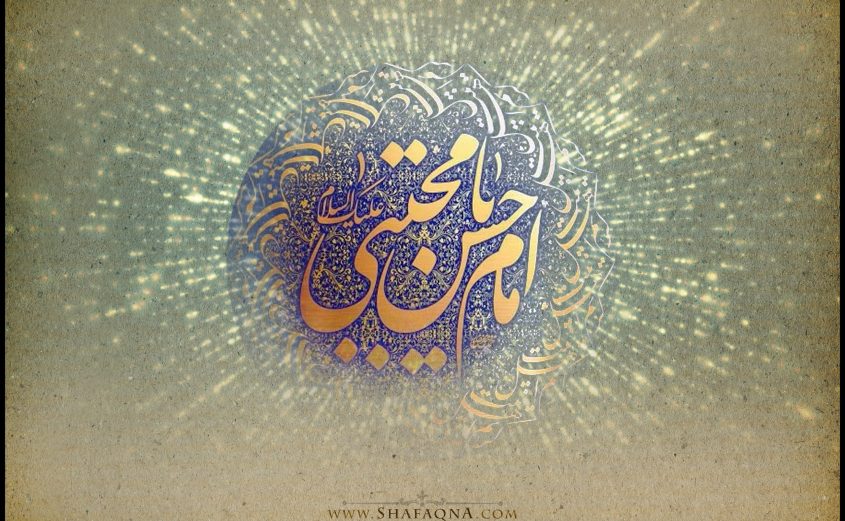 SHAFAQNA- Hassan (AS), the first child of Imam Ali (AS) and Lady Fatimah (SA), was born on March 4, 625 AD in Medina. His birth happened in the fasting Month of Ramadhan. The name Hassan was chosen by the Prophet (PBUH). This name was not famous among Arabs of that time. (Mufid, Irshad)

Imam Hassan (AS) was seven when his grandfather passed away. Shortly after, he lost his mother. Hassan (AS) and his younger brother Hussain (AS) consoled themselves in the arms of their father, Imam Ali (AS). From his youth, Imam Hassan (AS) was full of knowledge and he used to answer people’s questions. (Al-Kafi) ‘Hassan ibn Ali (AS) had unique virtues and moral qualities. He was patient, great, humble and kind,’ writes Suyuti. (Tarikh Al-Kulafa)

Imam Hassan (AS) was brave and valiant. He did not know fear. At the Battle of the Camel, his father gave him the mission to go to Kufa and call people to take up arms. The governor of Kufa refused Imam Hassan’s (AS) invitation. In spite of this, Imam Hassan (AS) managed to mobilize 9,000 people from Kufa to participate in the war. (Akhbar Tiwal) Imam Hassan (AS) fought alongside his father in the war and dealt devastating blows to the enemy.

He was on the frontline not only in the Battle of the Camel, but also in the Battle of Siffin for which he called on people of Iraq to combat the Syrian forces. Hassan (AS) and Hussain (AS) were in the midst of the battle, but their father asked other soldiers to prevent them from launching further forays in order to protect the bloodline of the Prophet (PBUH). (Nahjul-Balagha)

After the martyrdom of Imam Ali (AS) in 661 AD, Imam Hassan (AS) took the podium and delivered a sermon about his father’s virtues. People of Kufa pledged allegiance to Hassan (AS) as the successor to his father. This was how Imam Hassan (AS) took the reigns of power. He administered their affairs for six months and issued directives to governors. With the announcement of the martyrdom of Imam Ali (AS) in Syria, Muawiyah led an army against Kufa to try and overthrow Hassan (AS). 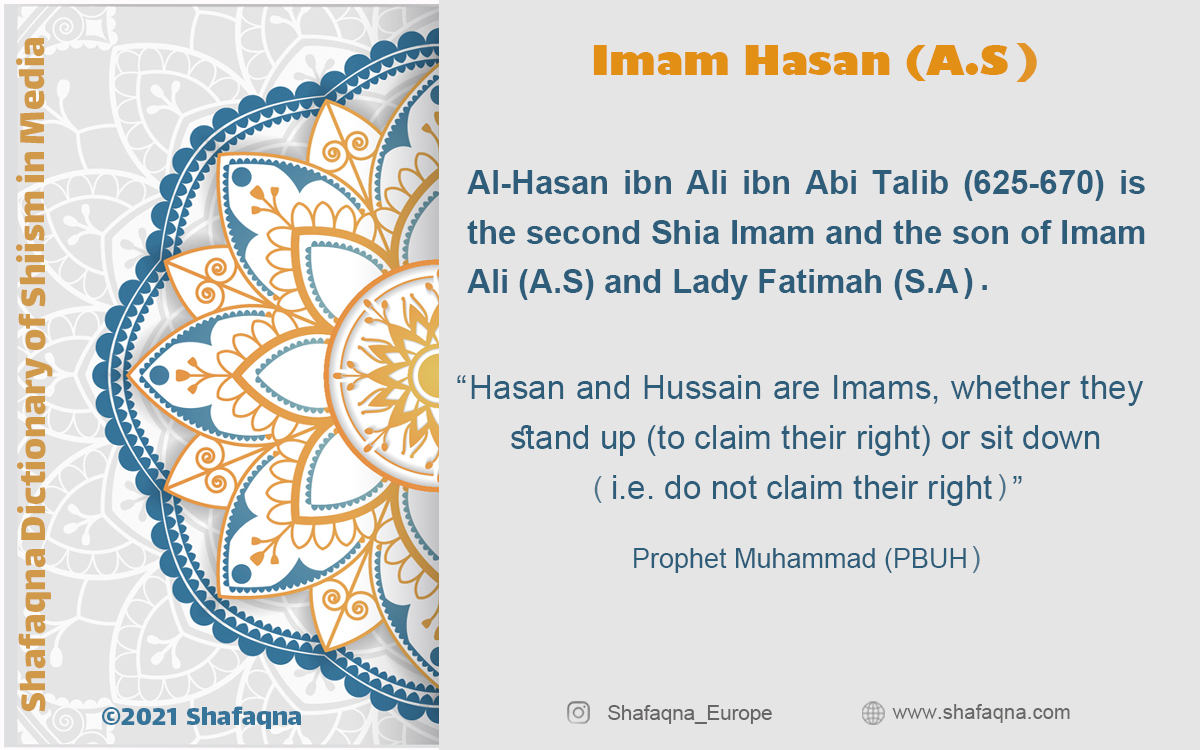 The question here is to know why Imam Hassan (AS) opted for a negotiated settlement with the enemy while his brother, Hussain (AS), chose to fight. Numerous books have been written on this subject. It is important to know that Imam Hassan (AS) never accepted peace. In fact, peace was imposed on him. The circumstances of that time obliged the Imam (AS) to accept peace. Anyone in his place would have agreed to peace too. Had the Imam (AS) chose to fight, Islam and Shia Islam would have been harmed.

The Roman Empire, which had suffered crushing blows from Muslims, was seeking an opportunity to invade the Islamic territory. As soon as Rome learnt about military deployments by Imam Hassan (AS) and Muawiyah, it decided to lead a strong army into the Islamic country. In the face of such sensitive conditions, Imam Hassan (AS) – whose duty was to safeguard Islam – had no option but to agree to peace in a bid to protect Islam from this threat.

Yaqubi writes: ‘Muawiyah returned to Syria after signing a treaty with Imam Hassan (AS). He received a report about the Roman Empire’s intention to invade the Islamic country. At that time, the Islamic government was not able to counter the Roman Army. Muawiyah had to pay 100,000 dinars a year to the Romans.’ (Tarikh Yaqubi) This historical document shows that in case of any confrontation between Imam Hassan (AS) and Muawiyah, the Roman Empire would have emerged winner. This threat was dispelled thanks to Imam Hassan’s (AS) foresight. To that effect, Imam Al-Baqir (AS) says:

‘Had Imam Hassan (AS) not accepted peace, Islam would have faced a tremendous danger.’ (Bihar Al-Anwar)

Imam Hassan (AS) had other reasons for accepting peace with Muawiyah. Firstly, the followers of Imam Hassan  (AS)– who had been his father’s followers – had had no respite from fighting. They were always on a war footing. Therefore, the Imam’s troops was exhausted. Upon hearing news of Muawiyah Army’s move towards Kufa, Imam Hassan (AS) called on his followers to be steadfast and prepared to sacrifice in the face of the enemy. But after the Imam concluded his sermon, everyone was silent and nobody agreed. Some followers of the Imam (AS) described people of Iraq as fearful and fake heroes. (Maqatil Al-Talibiyyin)

The allies of Imam Hassan (AS) finally managed to bring together several thousand people in Nukhayla. The Imam (AS) had to deliver a new speech to encourage some others to join him. One can easily see that fatigue and low morale dominated his soldiers and such an army could never win a war. The second point is that Imam Hassan’s (AS) men were poorly mobilized and organized and there were divisions among them. The main elements of the Imam’s forces were as follows:

The important question here is if such a divided army could fight in the battle. Certainly not! Such a war would have no other result but defeat and death for the faithful followers of Imam Hassan (AS). The Imam preferred battle with Muawiyah but he had to accept peace. In his last speech, Imam Hassan (AS) told people that Muawiyah had offered an unfair proposal to him. ‘If you are ready to die for God we have to battle him with our swords but if you want a life of ease then we have to accept his proposal,’ the Imam (AS) said.

The troops shouted. ‘Life! Life!’ In this way, they revealed their true intentions. Suppose that Imam Hassan (AS) was commander of Syrian army and Muawiyah was Iraq’s. Could Muawiyah do anything other than what Imam Hassan (AS) did? Had Muawiyah killed Imam Hassan (AS), a wave of fury would have grown against the Umayyad rule. Imam Hassan’s (AS) agreement to peace let people know rebels as they were. It was known to people during the reign of Muawiyah that the Umayyad rulers wanted the government for their own interests and not for promoting Islam. After the Umayyad’s intentions were revealed for all to see, Imam Hassan’s (AS) brother – Hussain (AS) – managed to lead a revolution. Hussain (AS) lost his life in the battle to show people the true character of their Umayyad rulers.

The text of Imam Hassan’s (AS) peace agreement with Muawiyah

The peace agreement signed between Imam Hasan and Muawiyah is an example of the Imam’s (AS) endeavours for realizing the sacred ideals of Islam. The articles contained within the treaty show that the Imam (AS) sincerely wanted to safeguard the ideals of Islam. The peace treaty is as follows:

‘Authority shall be handed over to Muawiyah provided that he acts according to the Book of God, the Prophet’s (PBUH) tradition and the tradition of the righteous Caliphs.
Authority shall be for Imam Hassan (AS) after Muawiyah. If something were to befall him, authority should be for his brother Hussain (AS). Muawiyah has no right to entrust it to anybody else.
Muawiyah shall abandon cursing Imam Ali (AS), both in prayers and in other settings, and shall not mention Ali (AS) except in a good manner.
Muawiyah shall see to it that the five million dirhams of the treasury of Kufa is spent in the way Imam Hassan (AS) deems right. Muawiyah shall distribute one million dirhams among the sons of those who were killed while fighting for Ali (AS) in the Battle of Camel and the Battle of Siffin, and should spend that money from the taxes of Darabgard.
People shall be safe wherever they are: in Syria, Iraq, Hijaz, Yemen, etc. Muawiyah shall give security to the people of all races. He must bear their slips, should not seek revenge for past deeds, nor should he punish the Iraqis for their past hostility. The Companions of Ali (AS) shall be given security wherever they are, Muawiyah shall not expose the Shia of Ali (AS) to any harm. The Companions and the Shia of Ali (AS) shall be given security over their lives, their properties, their women, and their children. Nor shall Muawiyah pursue them for a certain thing, nor should he expose them to any evil. And then, at the end of the agreement, Muawiyah solemnly pledges that he will accomplish all the contents of the agreement and takes God as witness to the treaty, which was also confirmed by the dignitaries of Syria.’ (Sulh Al-Hassan (AS), Sheikh Radi Al-Yasin)

A trick used by both the Umayyads and the Abbasids who succeed them was to spread false news in a bid to change public mood vis-à-vis the family of Imam Ali (AS). That is why rumours are heard against Imam Hassan (AS) who had been to Hajj pilgrimage on foot for 25 times. The Imam was rumoured to have married and divorced a large number of women; these rumours were mainly spread by courtiers in the Umayyad dynasty. Muawiyah tricked Imam Hassan’s (AS) wife Juda into poisoning to death her husband in exchange for marrying her to his son Yazid. The wife was easily tricked by Muawiyah and poisoned the Imam. Muawiyah was happy with the martyrdom of Imam Hassan (AS) who was the biggest obstacle to his plans. (‘Aqd Al-Farid)

To counter travel ban, Jewish filmmaker wants to give American Muslims a voice

Syria and Siffien – Thoughts on the Repetition of History 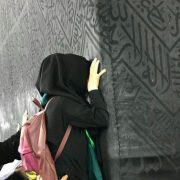