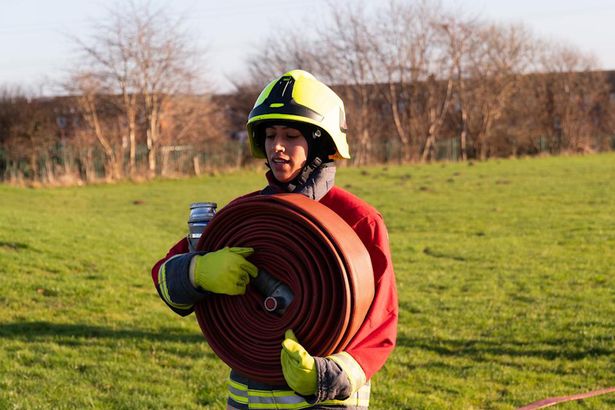 SHAFAQNA- Uroosa Arshid says she gets some confused looks from members of the public as ‘a lot of people do still stereotype firefighters’ but she wants to see the fire service become ‘so diverse that a stereotype isn’t possible’. Britain’s first Hijab-wearing firefighter has called on other Muslim women to follow in her footsteps. Fire chiefs sourced a special fire-proof Hijab for Uroosa Arshid to wear under her breathing apparatus.

The 27-year-old, from Aspley, Nottingham, said she gets some confused looks from members of the public. But she is loving being in her dream job – and wants more women to join up for the fire service. She said: “A lot of people do still stereotype firefighters, so when they see people like me they are very shocked and confused,” she said.

“You get all sorts of comments.

What is your view? Have your say in the comment section

“Partly because I’m a female and partly because of my faith and I wear Hijab, but I do definitely get quite a few strange looks.

“When I say that I’m from the fire service some people think I’m some kind of a fraud coming to the door because they don’t quite believe me.

“But when they see the big red truck and all my team around me it kind of drills it in a little bit.”

Uroosa always wanted to be a firefighter and says she dreamed about it since she was little.

“I’ve always viewed the service as very equal and diverse. It is a nice thing to know that I have broken down barriers,” she said.

“I personally don’t feel as though I am anything special. I’m a normal person who wants to do the job. “The job is incredible. It’s so rewarding. I go to work every day and know I am contributing and possibly helping to save lives.” The trailblazer now wants to see so many more women in the fire service that “you no longer feel like a minority.”

She added: “I want it to be so diverse that a stereotype isn’t possible. “I want to see women realising their potential and pursuing their goals, whatever they may be. “I’ve actually found it really easy to practise my faith while being a firefighter and everything that’s involved. “As a Muslim I try to pray five times a day, but the compulsory part of the prayer is only about five minutes long.

“So, if I have a few minutes I shoot off and do my prayer. “If there’s something urgent that needs doing, I will of course do that first. “But as long as there’s flexibility on both parts from my watch and the service, as well as myself, we can work through it.” Nottinghamshire Fire and Rescue Service said: “We are extremely privileged and honoured to be able to say we have the UK’s first Hijabi firefighter.”

Spain: Muslim burial sites given go ahead in Madrid

UK: Muslim volunteer wants to inspire others to keep his town clean