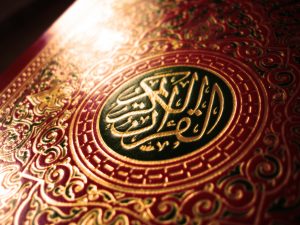 Prophet Ibrahim’s (AS) dialogue with Nimrod

2:258 Have you not considered the one (Nimrud, the king of Babylon) who argued with Abraham (AS) about his Lord (merely) because Allah (SWT) had given him kingship? When Abraham said, “My Lord is the one who gives life and causes death,” he said, “I give life and cause death.” Abraham (AS) said: “Indeed, Allah (SWT) brings up the sun from the east, so bring it up from the west.” So the disbeliever was overwhelmed (by astonishment), and Allah (SWT) does not guide the wrongdoing people.

Verse 2:259 states that Prophet Uzair wished to know how Allah (SWT) would resurrect the dead on Judgment Day. Allah answered his question by making him die with his donkey. Then, He gave life back to him 100 years later and restored the life of his donkey as well right in front of him.

Prophet Ibrahim (AS) asked a similar question to Prophet Uzair. Verse 2:260 states that Allah (SWT) asked Prophet Ibrahim to slaughter four birds, mix their flesh, place the mixed flesh at four different mountains, and then call upon them. The flesh of all four birds came together and became the original birds before Prophet Ibrahim’s (AS) eyes. Commentary on each verse is provided in the following sections.

Prophet Ibrahim (AS) and Nimrud: Prophet Ibrahim (AS) broke Babylonian idols at a very young age while the Babylonians were busy celebrating an annual festival in the city outskirts. When the town residents in the evening returned and saw the desecration of their gods, they decided to burn Abraham in a fire.

The Babylonians tied Prophet Ibrahim (AS) to a catapult and threw him into the fire, which took them 40 days to gather firewood for. With Allah’s command, the fire became a safe and calm place for Ibrahim.  Consequently, he emerged safely from the fire [1] and left Babylon for Palestine [2].

Before his departure, Nimrud, the king of Babylon, summoned Ibrahim to question his belief. The verse portrays the exchanges which happened between Nimrud and Prophet Ibrahim (AS). The verse goes as follows:

“Have you not considered the one (Nimrud, the king of Babylon) who argued with Abraham (AS) about his Lord.” (أَلَمْ تَرَ إِلَى الَّذِي حَاجَّ إِبْرَاهِيمَ فِي رَبِّهِi

The word “Hajja” (حَاجَّ) is the past participle of ‘‘Al-Muhajjah’’ (اَلْمُحاجَّهٌ). It means to provide an argument to prove a claim or refute the other party’s reason.  The basic meaning of “Al-Hujjah” (اَلْحُجَّة) is intention. Now, it implies the proof for an assertion which one intends to prove [4].

Allah (SWT) gave Nimrud wealth, power, and kingdom (أَنْ آتَاهُ اللَّـهُ الْمُلْكَ), which unfortunately made him arrogant and intellectually blind. Instead of believing in Prophet Ibrahim (AS), after seeing how he miraculously walked out of the fire, he decided to dispute Prophet Ibrahim’s (AS) belief.

Like Fharaoh [5], Namrud considered himself as the lord of people. Hence, he asked Prophet Ibrahim (AS), “Who is your Lord that you invite people to Him?” He replied, “My Lord is the one who gives life and causes death” (الَّذِي يُحْيِي وَيُمِيتُ).

Of course, no one except Allah (SWT) can give life and cause death. However, Nimrud decided to win the argument with deception. He ordered his prison guards to bring in two prisoners who have been sentenced to death. He released one and killed the other. Then he looked at the audience and said: “I give life and cause death.” (قَالَ أَنَا أُحْيِي وَأُمِيتُ) The fools around Nimrud could not understand that release and execution of prisoners does not equate to the creation of life and death.

The second argument begins with “Fainn-Allah” (فَإِنَّ اللَّـهَ), which indicates that the second argument does not mean to abandon the first argument. Instead, it is an addition to the first argument [6]. Nimrud became speechless (فَبُهِتَ الَّذِي كَفَر) – he could no longer refute the latter argument with deception. “And Allah (SWT) does not guide the wrongdoing people (by force)” (وَاللَّـهُ لَا يَهْدِي الْقَوْمَ الظَّالِمِينَ).

The phrase “Allah does not guide the wrongdoing people” (وَاللَّـهُ لَا يَهْدِي الْقَوْمَ الظَّالِمِينَ) implies that Prophet Ibrahim’s (AS) reasoning should awaken Nimrud from self-deception. However, oppression, aggression, and arrogance impaired Nimrud’s intellect. See commentary on verse 2:6 for further discussion. Alternatively, Nimrud’s inner Taghut (الطَّاغُوتُ) led him to the darkness of destruction in Hell. Nimrud’s inner Taghut was his arrogance, which led him to rebel against God.

The Blessings after Calamities: Commentary of the Quran (Chapter 2:153-157, Part-3) By: Mohammad Sobhanie

Writing a Will: Commentary of the Quran (Chapter 2:180-182) By: Mohammad Sobhanie

Imamat, Pinnacle Honor of Prophet Ibrahim Meaning of Imam: Commentary of the Quran (Chapter 2:124, Part-III) By:…

Religion of All Prophets: Commentary of the Quran (Chapter 2:135-137) By: Mohammad Sobhanie