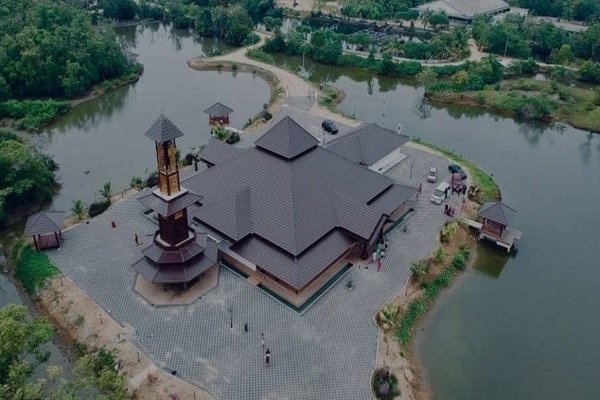 SHAFAQNA- IQNA: Ar-Rahman Mosque is located in Kampung Pulau Gajah village in Malaysia’s Kelantan State. The Mosque has a unique architecture and design overlooking a beautiful natural and serene scenery. Standing proud at the fringe of the village, the Mosque, thanks to a corporate philanthropist, was built five years ago.

Covering an area of 5,000sq ft (464.5sq m) and surrounded by a man-made river, the Ar-Rahman Mosque was built to cater to the increasing number of hajj pilgrims in Mukim Pulau Gajah. The idea and inspiration to build the Mosque came from the philanthropist who travelled a lot and was inspired by several Mosques overseas such as the Masjid Agung Demak in central Java, Indonesia and those in Turkey and Morocco.

In the middle of the prayer hall are five solid wood pillars representing the five pillars of Islam. In the dome are sketches of 15 stars and calligraphy of Khulafa’ Ar-Rasyidin done in a circle, inspired by the Blue Mosque in Turkey. Six builders from Indonesia were commissioned to construct the mosque that took two years to complete and can accommodate 1,000 people at any one time, according to Bernama. The Mosque offers ample parking space, recreational areas and canteen for the comfort of visitors and members of the congregation.