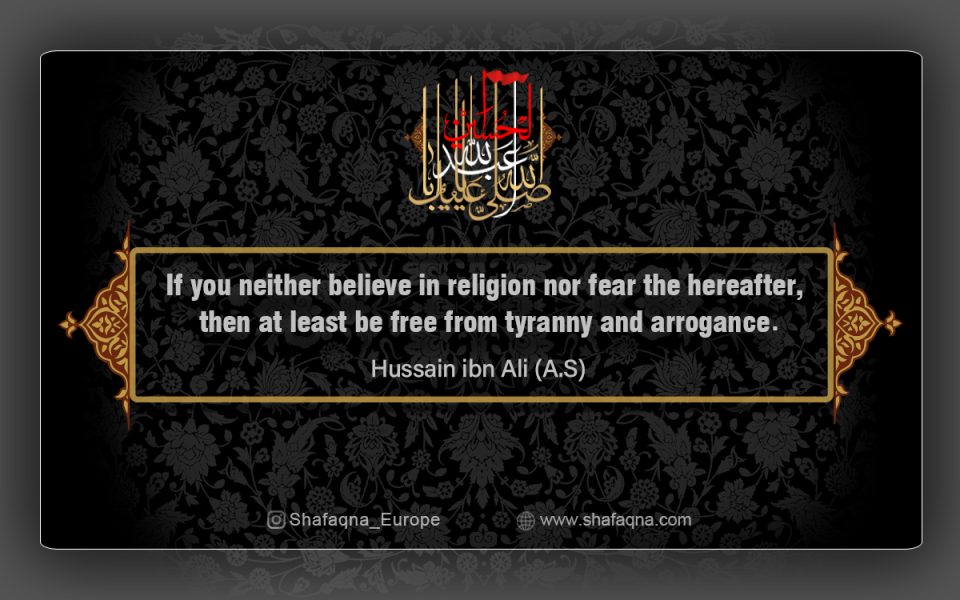 SHAFAQNA | by Dr Chris Hewer: The questions faced by Hussain [AS] were questions that run throughout human life in every time and situation. What should I do when I know that something is wrong? Do I say something or keep quiet? What should I do when injustice and tyranny are walking the streets and people are looking to me for an example? Should I look the other way and hope that it will go away? Should I take action or just talk about it? What about my responsibilities as a leader? If I cave in to injustice then will not everyone else think the same way and follow my example? Is there anything more important that preserving my own life?Even stronger: Is there anything worth dying for? What do I really think about life after death?

Who was Hussain (AS)?

All Muslims believe that the Quran is the last scripture sent to the earth by God. It is the final, universal guidance for all humankind. Similarly, Muhammad [PBUH] is the last Prophet to be sent to the earth. The Quran was given to Muhammad between 610 and 632 CE. The question is: Who should lead the Muslim community after the death of Muhammad in 632? Shia Muslims believe that God gave clear guidance that leaders after Muhammad [PBUH] had to come from the Ahlul-Bayt [AS], the Family of the Prophet. These were descended from Muhammad and his first wife Khadija [SA], through their daughter Fatimah [S.A]. She married a cousin of Muhammad [PBUH] called Ali [AS] and together they had two sons called Hasan and Hussain.

These five people: Muhammad (PBUH), Fatimah (SA), Ali (AS), Hassan (AS) and Hussain (AS) form the core of the Ahlul-Bayt [AS] and its later generations were descended from them. There is an incident recorded in the Quran where God purified these five and raised them to be the highest of all humanity. They were people of the highest degree of spirituality. They were blessed by God with knowledge that only God could give and thus they were chosen to be leaders of the Muslim community. In Shia understanding, Ali, Hasan and Hussain were the first three divinely appointed leaders of the Muslim community. They had a duty to lead and guide the Muslim community after the death of Muhammad.

Hussain [A.S] was the second son of Ali [AS] and Fatimah [SA] and born in 626. He was the grandson of Muhammad [PBUH] and only six years old when the Prophet (PBUH) died. Muhammad treated the two boys as though they were his own children. They drank in the values and practices of extended family life in his company. He loved to play with them and was always calling them to be near him. There was one famous occasion when Muhammad was leading the prayers with one of his grandsons beside him. As he bowed down to the ground to prostrate before God, the boy climbed up onto his shoulders. Muhammad (PBUH) waited with his forehead on the floor until his grandson had climbed all the way up to his neck where Muhammad (PBUH) could hold on to him and let him ride on his back until the end of the prayer.

#OneShiaOneMessage: Karbala is a lesson to learn [photos & video]