SHAFAQNA- At a number of places in the Holy Qur’an Allah (SWT) has directed people to ponder over the contents of the Holy Book and not to pass by them cursorily In a large number of verses, the universe and the entire creation have been described as Allah’s (SWT) signs. They have been called so because they indicate a great truth. When a man sees red light as a sign of danger, his attention is concentrated on the danger and he ceases to pay attention to the light itself. If he still thinks of the shape, colour and nature of light, then these things will absorb his attention and he will not be able to attend to the impending danger. Similarly the universe and its manifestations are the signs of their Creator, an evidence of God’s existence and power.

They have no independent existence. We may look at them from any aspect, they indicate nothing but Allah (SWT). He who looks at the world and the people of the world from this angle under the guidance of the Qur’an, he will perceive Allah (SWT) alone. He will not be fascinated by the borrowed charms of this world, but will see an infinite Beauty, a Beloved manifesting God from behind the curtain of this world. No doubt, as we have explained by citing the example of red light, what the signs indicate is not this world, but the person of its Creator. We may say that the relationship between Allah (SWT) and this world is not that of 1 + 1 or 1 x 1, but is that of 1 + 0. In other words, this world in relation to Allah (SWT) is a nonentity and does not add anything to God’s Essence.

As soon as man realizes this fact, his notion of having an independent existence is smashed and he suddenly feels imbibed with love of Allah. Obviously this realization does not come through eyes, ears or any other sensory organs or mental faculties, for all organs themselves are mere signs and cannot play any significant role in providing the guidance we are talking about.1

When a man having access to Divine manifestation and desiring to remember Allah (SWT) alone, hears the following passage of the Qur’an, he comes to know that the only path of perfect guidance is that of knowing himself: O’ you who believe, you have charge of your own souls. He who errs cannot injure you if you are rightly guided. (Al-Maldah, 5:105)

He understands that his true guide is Allah (SWT) alone who enjoins upon him to know himself and to seek the path of self-knowing, leaving all other paths. He must see Allah (SWT) through he window of his own soul and thus achieve his real objective. That is why the Holy Prophet (PBUH) has said: He who has known himself, has known Allah (SWT).2

He has also said: ‘Those of you who know Allah (SWT) better, better they know themselves.’3

As for the embarking on spiritual journey there are many verses of the Qur’an which urge the people to remember Allah (SWT). For example at one place the Qur’an says: Remember Me (God), I will remember you. (Al-Baqarah, 2:152)

Man has been ordered to do good deeds also, which have been explained in the Qur’an and the Sunnah. Mentioning the good deeds Allah (SWT) says: Surely in the Messenger of Allah (SWT) you have a good example. (Al-Ahzab, 33:21)

How can it be imagined that Islam would declare that there was a path leading towards Allah (SWT) without appraising the people what that path is?

And how can it be that Allah (SWT) would mention a path without explaining how it is to be traversed?

Allah (SWT) says in the Holy Qur’an: Messenger, We have revealed this Book to you. It contains the details of every thing. (Surah An-Nahl, 16:89)

2 A well-known tradition repeatedly quoted in the books of both the Sunni and Shia Gnostics.

3 Mother tradition cited in the books of the Sunni and Shia Gnostics.

Adapted from: “Light Within Me” by: “Allamah Mutahhari (RA), Allamah Tabataba’i (RA) and Imam Khomeini (RA)”

The Land of Karbala - Poem

The Objectification of Muslims in America

Restrictions on Egyptian Muslims’ sermons not a good sign 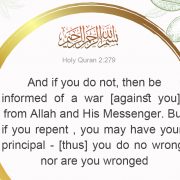