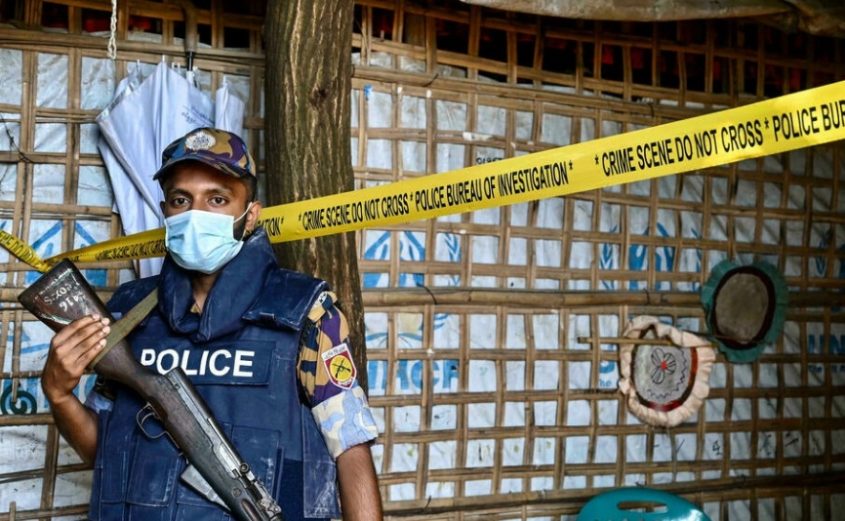 SHAFAQNA- A number of 850,000 Rohingya refugees living in Bangladeshi refugee camps are fearing for their lives after the recent killing of a popular leader.

In the weeks since the murder of Mohib Ullah, Chairman of Arakan Rohingya Society for Peace and Human Rights, a senior member of the now-shellshocked volunteer group that Ullah headed has received phone calls telling him he’ll be next. And he’s not alone. “They can hunt you down the way they have brazenly shot dead our leader and so many people,” Noor, too frightened to give his real name or be filmed, told AFP. “They”, he believes, are members of the Arakan Rohingya Salvation Army (ARSA), an insurgent group fighting the Myanmar military but also thought to be behind a wave of killings and criminal activity in the camps.

Most of the Rohingya have been in the camps since 2017 when they fled a brutal military offensive in Buddhist-majority Myanmar, where the predominantly Muslim minority are reviled . Refusing to go back until they are assured of security and equal rights, the refugees remain stuck in bamboo-and-tarp shacks with no work, poor sanitation and little education for their children.

Most of them are of the opinion that the security in the camps has gone from bad to worse in recent times as armed gangs belonging to Arakan Rohingya Salvation Army (ARSA) have established a realm of fear. “We fled our country and came here to save our lives. Unfortunately, things haven’t changed much for us. We live in constant fear,” said Zakir Hossain, a resident of camp-7 in Ukhia, according to The Daily Star.

Overflowing latrines fill narrow mud lanes with excrement in monsoon season, and fires can rip through the flimsy homes in minutes during the hot summers. By day the Bangladesh authorities provide some security. But at night the camps become the domain of gangs. Working among the chaos and unease in the camps, Ullah and his colleagues quietly documented the crimes that his people suffered at the hands of the Myanmar military, while pressing for better conditions.

Family members of senior Rohingya leaders told AFP that Bangladesh security forces have since relocated at least six families including Ullah’s, fearing they will be targeted. Members of Ullah’s group are far from reassured, saying that their security concerns fall on deaf ears. Some even mutter that ARSA and the Bangladesh security forces are in cahoots — something Dhaka vehemently denies. Kyaw Min, a top Rohingya leader, said police assist ARSA to “reign” at night by “conveniently” not being around when they operate, France24 reported.