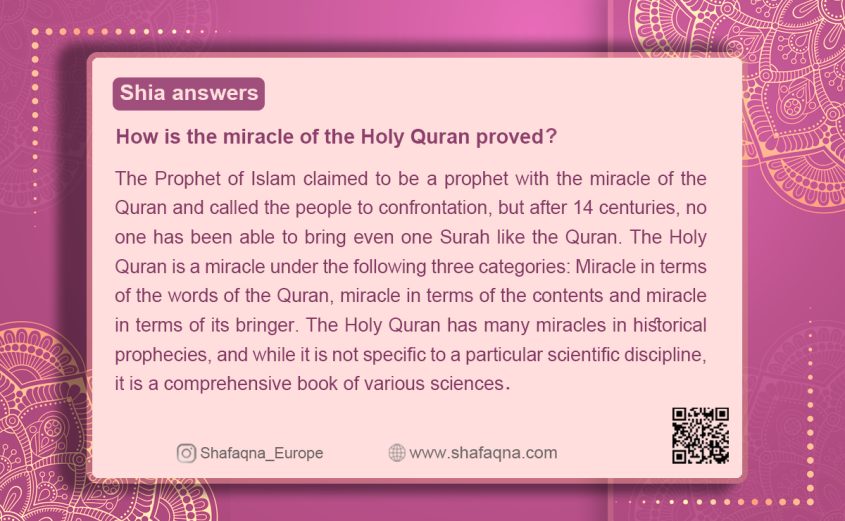 Firstly, the meaning and truth of ’I‘jāz (Inimitability) and miracle and its conditions must be mentioned to see if these conditions exist in the Holy Quran. The truth of the miracle is that the person who claims to be a Prophet performs an extraordinary deed and invites others to do the same, but they are incapable of doing the same.

The mentioned conditions can be seen in the Holy Quran, that is, the Prophet of Islam (PBUH) claimed to be a prophet by the miracle of the Quran and called the people to discussion and asked the disbelievers to bring only one Surah and seek help from all the worlds to make the Surah.

“And if you are in doubt about what We have sent down [i.e., the Quran] upon Our Servant [i.e., Prophet Muhammad (PBUH)], then produce a Surah the like thereof and call upon your witnesses [i.e., supporters] other than Allah (SWT), if you should be truthful.” (the Quran 2:23) 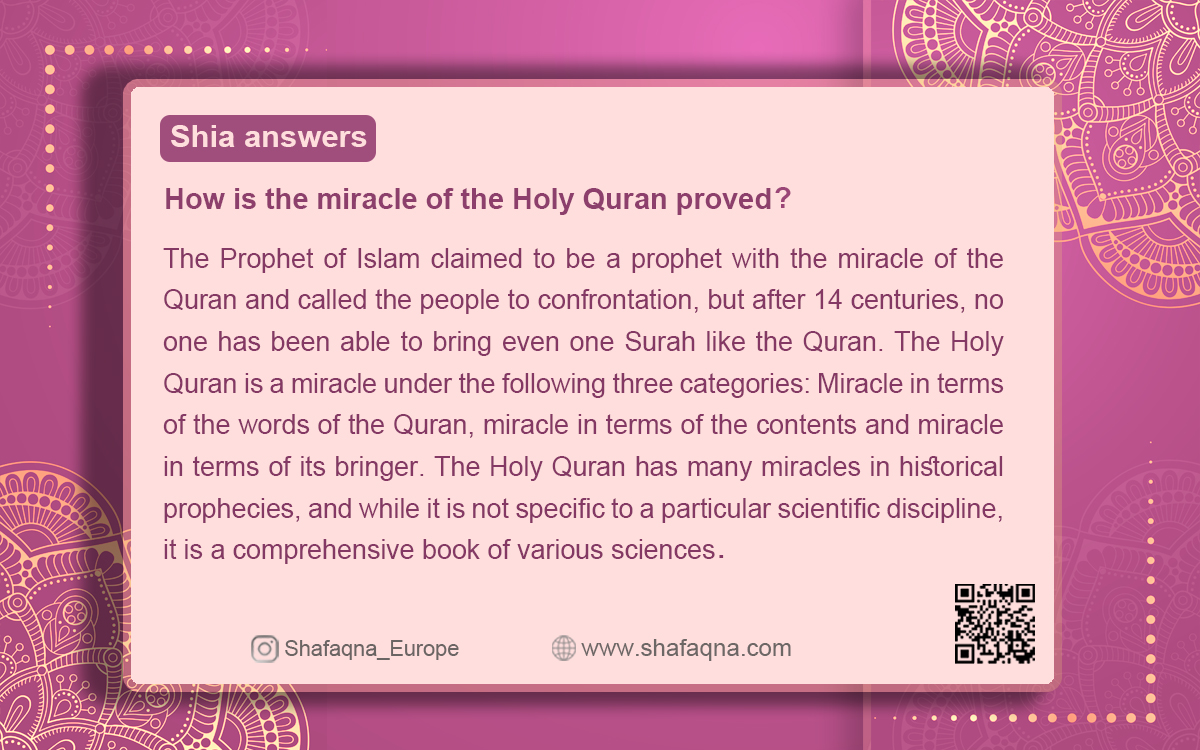 This call has been made for fourteen centuries, but no one has been able to step on the battlefield or succeed; Because the miracle of the Holy Quran is not limited to verbal miracles, but includes several aspects. Some of the miraculous aspects of the Holy Quran are as follows:

1- Miracle in terms of its bringer: It means the Holy Quran, in which the sublime knowledge, high meanings, wise sayings and various sciences are gathered, brought by a person who did not even know how to read and write. Accordingly, the Holy Quran relies on the word “Ummi” about the Prophet (PBUH) and addresses him: “And you did not recite before it any scripture, nor did you inscribe one with your right hand. Then [i.e., otherwise] the falsifiers would have had [cause for] doubt.” (the Quran 29:48)

Therefore, Walid ibn Al-Mughira, one of the greatest writers of the pre-Islamic period, said of the Holy Quran: “I heard a word from Muhammad (PBUH) that bears no resemblance to the words of humans or fairies. His speech has a special sweetness.” But to neutralize the influence of the Holy Quran, he said: “Say that the Prophet (PBUH) is a sorcerer.” The melodic words, frankness and decisiveness, sobriety and chastity in expressing the meanings, all show that the Holy Quran has been expressed in a beautiful and artistic way.

A verse from the Quran was able to bring Ibn Muqaffa, the famous writer, to his knees and the verse is: “And it was said: “O’ earth, swallow your water, and O’ sky, withhold [your rain].” And the water subsided, and the matter was accomplished, and it [i.e., the ship] came to rest on the [mountain of] Judiyy. And it was said, “Away with the wrongdoing people.” (the Quran 11:44), Because it briefly describes the story of Noah’s flood with short and very meaningful interpretations. According to some scholars, 23 points from the literary devices are gathered in this verse.

3- Miracle in terms of the contents: The Holy Quran is also a miracle in terms of content and meaning, because it has raised the religious issues and has described God in the most beautiful way. Also, some verses of the Holy Quran are in accordance with the scientific rules of today, such as creation of the world, motion of the earth, motion of the solar system, life on other planets and causes of rain. These facts were unknown to mankind in the past and some cases are still unknown. In a book entitled “A Comparison between the Torah, the Bible, and the Quran and Science,” Maurice Bocay, a French Quran Researcher, says after comparing Quranic verses with scientific achievements:

“How can one not be surprised by the adaptation of the Quran to the latest human scientific products and not consider it a miracle?!”

Interestingly, there is not the slightest difference in the contents of the verses of the Quran, and this is another sign of the miraculous nature of the Holy Quran in terms of the contents. The Holy Quran itself points to this fact: “Will they not think about this Quran? If it had been from anyone other than God, they would have found much inconsistency in it.” (Quran 5:82)

Other types of the miraculous nature of the Holy Quran:

1- Miracle in historical predictions such as predicting the Roman victory over the Persians, in Surah Ar-Ruom.

3- Comprehensiveness of different knowledges. The Holy Quran is not a legal or moral or theological or doctrinal book, nor is it historical or rhetorical, and it is not in a specific scientific field, but at the same time, it has accumulated all the knowledges.

*The series of articles “Shia answers” has been prepared and compiled by the Shafaqna International News Agency in order to provide short and simple answers to common questions about Shia Islam in different parts of the world. Answering these questions are done in collaboration with researchers and Islamic centers and based on online and library resources.

Shia answers: Do the Shia Muslims follow the Sirah of Prophet Muhammad (PBUH)?