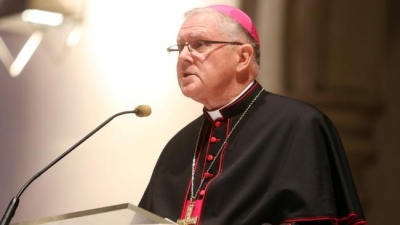 SHAFAQNA – THE Archbishop of Brisbane wants Catholics to open their churches and schools to persecuted Syrian Muslims.

Archbishop Mark Coleridge will today urge the tens of thousands in his archdiocese to take in hundreds of Syrian refugees fleeing unimaginable horror in the Middle East.

He has also called on the Church to help combat fear and to “get involved politically’’ with the strategy against ISIS.

Writing to more than 100 priests yesterday, Archbishop Coleridge said the Church had a number of resources – including schools and outreach centres – and they should be used to help the needy, regardless of their religious beliefs.

“We cannot expect the Government to do everything to address a crisis as large and complex as this,’’ he said.

“I want to galvanise all the resources of the archdiocese so we can play our part in providing a safe and welcoming home for refugees who will come from the Middle East.

“We have just over 100 parishes, and I would want to commit to receiving at least 100 families in the archdiocese.

“But as people who know the parable of the good Samaritan, we will welcome all who come to us.’’

The Church will work with the Government to determine where people are housed.

The Brisbane Archdiocese includes the Gold and Sunshine coasts, stretching to the NSW border, west to Gatton, and north to Maryborough, Hervey Bay and Childers.

Opposition foreign affairs spokeswoman Tanya Plibersek yesterday said the international community might have to do more.

“There are 11, maybe 12 million people who are displaced from their homes in Syria,” she said.

“So it might be necessary for the international community to do more.’’