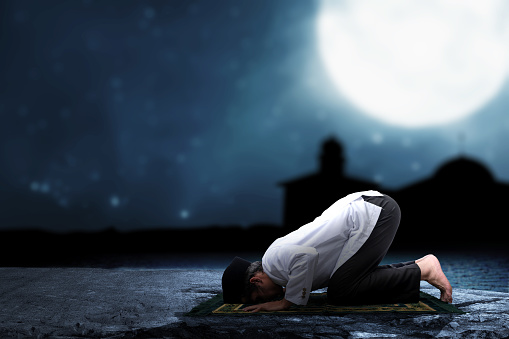 Question: I doubt whether my prayer is valid. Please tell me how to perform my prayers correctly.

Answer: First, everyone has an obligation to make the prayer five times a day; the daily prayers (Salaat/Salaah/Namaz) are as follows:

Note that it is compulsory for those who do not travel to do as mentioned above. In trips, prayers with 4 Raka’ahs are shortened in sets of 2 Raka’ahs. The time is from true noon until afternoon.

3) Sunset (Maghrib) prayer is always 3 Raka’ahs; in other words, it cannot be changed in the same way as prayers that are 4 Raka’ahs. Its time is about 15 minutes after sunset, when the redness of the setting sun in the east has disappeared.

5) The fifth obligatory prayer is the night (Isha’a) prayer with 4 Raka’ahs; this applies only when the person is in his hometown. If the person is on a trip and does not intend to stay for ten days, then the prayer is shortened to 2 Raka’ahs. The time begins after the sunset prayers until midnight (as defined in the religious code).

When one may be unable to perform one’s prayer within the prescribed time period, the prayer should be done as soon as one is able to do so. If he was not able to perform the dawn prayer during the certain prescribed time, for example, he must perform it at the afternoon or night. Of course, it should be intended as Qadha prayers. Generally speaking, these prayers are obligatory on every Muslim, and must be performed at their prescribed times. This means that no one can shirk this duty and this applies for all the five daily prayers.
Here, we discussed the various issues in regards to obligatory aspects of the prayer and its timing.

Second, before conducting prayers, the person should be clean by performing the ritual ablution (Wudhu), Ghusl[2] or Tayammum.
The ablution is done as below:

1. The person must have the intention that the act is offered for God (the intention of Qurbat).
2- Then, the person must wash the face from the top of the forehead to the bottom of the chin with pure and clean (non- usurped) water.
3- Then, the person must wash the right arm from the elbow to tips of the fingers. He does the same with the left arm. After washing his hands, the hair from the middle down to the forehead is wiped with water remaining on his hand. It is not obligatory to wipe the actual skin on the head. However, if the hair is long and isn’t growing from the area you are wiping (such as if you have a comb over), then you must move the hair and wipe the skin. Without taking more water, the person must wipe the top of his right foot from tips of finger to the ankle. The same is done for the left foot.

It should be noted that the person must be clean from any impurities like blood, urine, etc. Moreover, purification of the clothes is obligatory. Now, the person is ready to perform his prayers.

Third, how to perform the prayer.

1) Dawn Prayer: before offering obligatory daily prayers, It is praiseworthy (Mustahab) for the person to recite Adhan and Iqamah, whether he is on a trip or not, and the prayer is performed at its prescribed time or is Qadha.

“Ash Hadu Anna Aliyyan Waliyyullah” (I testify that Imam Ali (AS) is the vicegerent of Allah) is not a part of either Adhan or Iqamah. But it is good if it is pronounced after Ash hadu anna Muhammadan Rasulul-Lah with the Niyyat of Qurbat (offered for God)[3].

Iqamah consists of 17 sentences. “Allahu Akbar” is reduced in the beginning to twice, and at the end, “La ilaha illal lah” to once. After “Hayya Ala Khayril Amal”, “Qadqa matis Salah” (the prayers has certainly been established) must be added two times.
It should be noted that to recite Adhan and Iqamah is not obligatory for the prayers. So, prayers would be valid even if Adhan and Iqamah were not said before offering daily obligatory prayer. One who does not know or has not memorized them, can also read them from some papers.

How to make the Dawn prayer:

1) Stand facing the qibla, and initiate the intention to perform the prayer with the intention of Qurbat (offered for God).
2) Then, say the Takbir; i.e. “Allahu Akbar” (God is the Most Great);
3) Recite Surah Al-Fatiha first and then Surah Al-Ikhlas, or Al-Asr, Al-Kosar, or any other section from the Quran[4]. If the person has not memorized any Surah, he is permitted to read it from the Holy Qur’an or from some other papers;
4) Perfom the ruku, bowing while the palms of the hand are placed on the knees, and reciting three times, “Subhana Rabbiyal Azim wa bi Hamdihi” (Most Magnificent and Great is my Lord Whom I am praising) or “Subhaana Allah” (Glory to God) three times;
5) Come back to the standing position once again after ruku as the back is straightened. Those who are ill or physically unable to stand in a straightened manner are permitted to offer their prayers as they are able to.
6) Perform Sadjah, prostrating on the ground, while the forehead must contact the ground or something like soil, rock, paper, etc. The palms, the knees and the index fingers are placed on the ground. After these seven parts are placed on the ground, the person recites “Subhana Rabbiyal A’la wa bi Hamdihi ” (Glory and all praise be to my Lord who is the Most High), or three times “Subhaana Allah” (Glory to God) or “Allahu Akbar” (God is Most Great). Then, he rises to a sitting position, prostrates again in the same manner.
7) After conducting two Sajdahs, he rises to a standing position for the second raka’ah and recites Surah Al-Fatiha and Surah Al-Ikhlas in the same as before. Before beginning ruku’, it is praiseworthy (Mustahab) to raise hands up, reciting certain du’as and dhikrs. It is preferable to recite this du’a: “La Ilaha Illallah Al-Halim Al-Karim” (There is no god but Allah, the Clement, the Generous), La Ilaha Illallah Al-‘Aliy Al-‘Azim (There is no god but Allah, The Lofty, The Mighty), Subhan Allah Rabu Samawati Sab (Glory be to Allah, Lord of the seven heavens), wa Rabul-Arz’in Sab (and Lord of the seven earths), wa Ma Feehinna wa ma Baynahunna (and whatsoever is therein and among them), wa Rabul Arsh Al-‘Adzim (and the Lord of the Great Throne), wa Al-Hamdu Lillahi Rabbil ‘Alamin (and, praise be to Allah, the Lord of the World)”. Then, the Ruku’ and sadjah are conducted as previously described.
8) After two rak’as, the person sits after the prostrations and recites Tashahhud and the greetings of salam, saying:
“Ash Hadu an La ilaha Illal Lahu (I testify that there is none worth worshipping except the Almighty Allah). Wa Ashhadu Anna Muhammadan ‘Abduhu wa Rasuluh (And I testify that Muhammad is God’s servant and messenger), Alla Humma Salli ‘Ala Muhammadin wa Ali Muhammad. (O Allah! Send your blessings on Muhammad and his progeny). Assalamu ‘Alayka Ayyuhan Nabiyyu wa Rahmatullahi wa Barakatuh (O Prophet! Allah’s peace, blessings and grace be upon you!). Assalamu ‘Alayna wa ‘Ala ‘Ibadil-Lahis-Salihin (Allah’s peace be on us, those offering prayers—and upon all pious servants of Allah). Assalamu ‘Alaykum wa Rahmatullahi wa Barakatuh. (Allah’s peace, blessings and grace be on you believers!) ” This concludes the dawn prayer.

How to make the sunset prayer:

This is performed in 3 Raka’ahs, the first two being the same as the dawn prayer. Before reciting greetings of Tashahhud and Salam, the person now stands up and begins the third raka’ah. It is optional just to recite Surah Al-Fatiha or say: “Subhan-Allah wal-Hamdu-Lillahi wa la Ilaha Ill-Allah wa-Allahu Akbar” (Glory be to Allah, and praise be to Allah, and there is no god but Allah), it is preferable to repeat the latter three times[5].

Then, the person begins Ruku’ and Sadjah, and after the prostrations he recites Tashahhud and the greetings of Salam. This is done in the same manner as the dawn prayer. This concludes the sunset prayer.

This is a very brief discussion about the five daily prayers, which are obligatory on every Muslim to perform. The prayer is recommended to perform in congregation which is pleasing to God.

[1] – An-Nahl, 43
[2] – Whether prayers can be conducted by means of a compulsory Ghusl or a Mustahab one, there is no agreement between the Grand Ayatollahs. In this regard, everyone should refer to his own religious guide (Marjah).
[3] – Resaleh ‘Amaliyeh (Practical Treatise), Adhan and Iqamah.
[4] – Except for four Surahs with a compulsory Sadjah.
[5] – Tahrir Al-Wasileh, Vol. 1, P. 152, Q, 17.
[6] – Provided that her voice cannot be heard by strange men (non-Mahram).
[7] – Resaleh ‘Amaliyeh (Practical Treatise), Principles of Prayer; Tahrir Al-Wasileh, The book of Salah 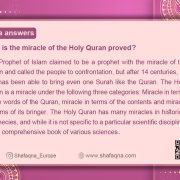 Shia answers: How is the miracle of the Holy Quran proved? 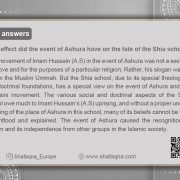 Shia answers: What effects did the event of Ashura have on the fate of the Shia School? 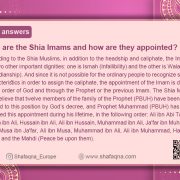 Shia answers: Who are the Shia Imams (AS) and how are they appointed? 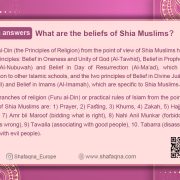 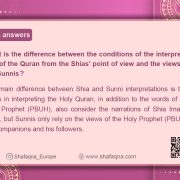 Shia answers: What is difference between conditions of interpretation of Holy Quran from Shias' point of view… 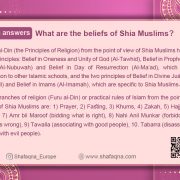 Shia answers: What are the beliefs of Shia Muslims?
0 replies