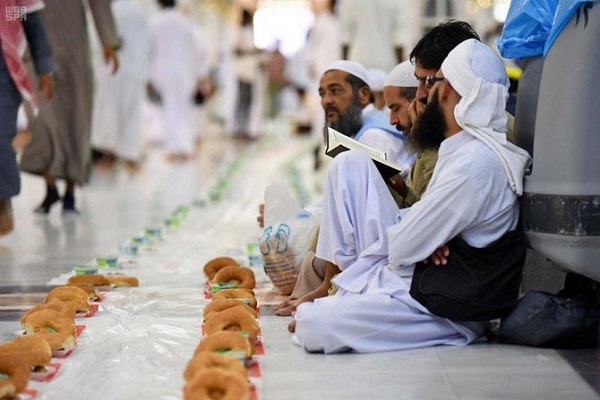 SHAFAQNA- IQNA: The Prophet’s (PBUH) Mosque in Medina will allow holding Iftar banquets in the upcoming Ramadhan under strict health protocols. The Agency for the Affairs of the Prophet’s (PBUH) Mosque in Medina announced on Thursday a plan to resume mass Iftar (breaking fast) program at the mosque during the upcoming holy Month of Ramadhan after a hiatus of two years. The Iftar program has been suspended as part of precautionary measures following the outbreak of coronavirus pandemic since Ramadhan 1441, which started on April 24, 2020.

The agency said the resumption of Iftar meal at the Prophet’s (PBUH) Mosque will be under strict health protocols to stem the spread of the coronavirus. Only those people who are licensed to spread Iftar Sofra (spread on which food is laid) will be allowed to do so at their previously designated places. The exact number of worshipers allowed at each Sofra will be informed later after reviewing the pandemic situation.

The agency stressed that the Iftar meal providers have to conclude contracts with approved catering companies to prepare meals, and to restrict the number of people on one Sofra to 5 in the event of implementing regulations to maintain social distancing, and 12 people in the event of not applying social distancing measures. The regulations also include seating on one side of the Sofra, facing the Qiblah. Those licensed to provide Iftar meal service shall update their data effective from the beginning of the Month of Rajab (Feb. 2, 2022), the agency added.

The General Presidency for the Affairs of the Two Holy Mosques had suspended spreading Iftar Sofras and performing I’tikaaf (the practice of staying at a Mosque for worship for a certain period of time) at the Grand Mosque in Makkah and the Prophet’s (PBUH) Mosque in Medina during the last two seasons of Ramadan as part of the coronavirus protocols.

However, the presidency made arrangements to distribute individual ready-made Iftar meals for those visiting the Holy Mosques under strict measures. Only bottled water and packets of dates were allowed to serve within the precincts of the Holy Mosques. Before the outbreak of the pandemic, mass Iftar at the Prophet’s Mosque during Ramadhan used to provide a unique spiritual experience not only for the people of Madinah but also for the hundreds of thousands of pilgrims and visitors who come to the holy city from different corners of the world.

The Iftar Sofras at the Prophet’s (PBUH) Mosque are considered as the longest food table in the world. Dates, bread, yogurt, Arabian coffee, and water bottles are supplied in abundance to meet the requirements of the increasing number of worshippers who break their fast at the Mosque. Heavy dishes such as Kabsa, mandi, meat, rice, as well as fruits and juices were served in the shaded courtyards around the mosque where there were separate sections for women. Massive and elaborate arrangements for Iftar were made inside and outside the mosque with worshippers filling all its corners.

According to sources, there were around 30,000 Sofras spread out in the mosque and 63,000 Sofras at its shaded courtyards during the holy month before the outbreak of the pandemic. More than 10,000 Madinah residents used to organize Iftar meals at the Prophet’s (PBUH) Mosque and its courtyards. The entire space inside the Haram used to be reserved by Medina residents to hold Iftar meals. Some of them inherited the space from their ancestors who started this noble deed several decades or even centuries ago.

“I’m Not a Muslim, But I Will Fast For One Day” 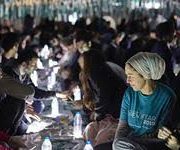 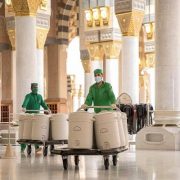 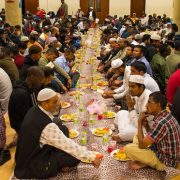 Ramadan, the month of generosity of UK Muslim community 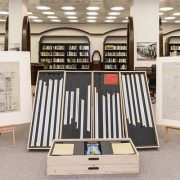