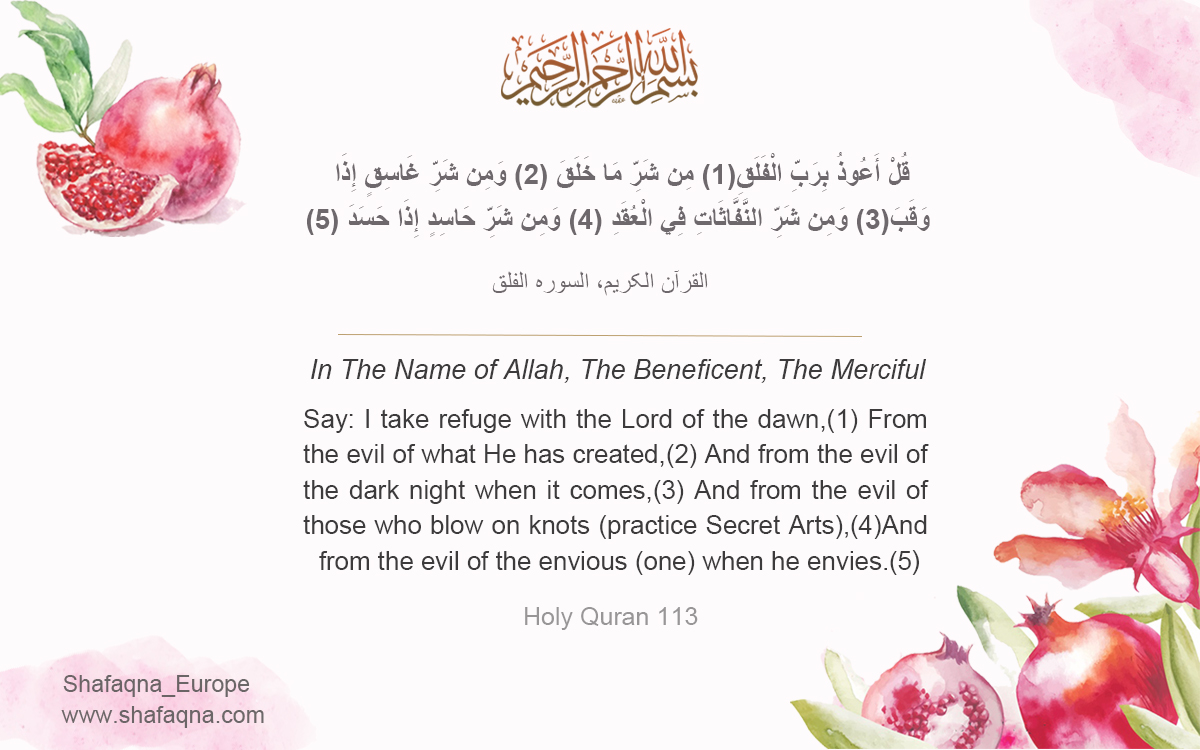 In The Name of Allah (SWT), The Beneficent, The Merciful

I Take Refuge In the Lord of the Dawn

In the first verse of the Surah, the holy Prophet (PBUH), himself, as a model and leader, is addressed and the command is:

“Say: I take refuge in the Lord of the Dawn,”
“From the evil of what has been created,”

We should seek refuge with Allah (SWT) from the evil of all wicked creatures, wicked men, Jinn, animals and evil happenings; and from the evil of the ‘carnal soul’. The term Falaq is based on Falq which originally means ‘to split, to separate some from others, daybreak’; and since at the time of the appearance of daylight the black curtain of night breaks open, this word is used with the meaning of ‘daybreak’, as well as, /fajr/ which is used for the ‘break of dawn’.

Some know the word with the meaning of ‘the creation of all living creatures’ which includes men, animals and plants, because they come forth from splitting seeds, eggs, and the like, which is the most surprising stage of their existence. In fact, when it comes forth, a great change happens in that being and it transfers from one world to another.

Some have considered a broader meaning for Falaq than what was said above. They think that its meaning covers any creation, in general, because it is by the creation of every being that the curtain of nothingness breaks and the light of existence appears. Each of these three ideas is a surprising phenomenon which is an evidence for the greatness of Allah (SWT), its Creator. That Allah (SWT) is qualified with this attribute conveys an intensely profound content and a wide ranging concept.

Some Islamic narrations denote that Falaq is a well or a prison in Hell which appears clearly in the midst of it. This narration may refer to one example out of its examples, but, it is not to limit the vast meaning of Falaqof course. The phrase in the second verse does not mean that the divine creation, by itself, has an evil because creation is the same as existence and existing is absolute goodness.

“God Who has made everything and God has created Most good…”(1).

Evil appears where the creatures diverge from the laws of creation and separate from the appointed path; for example, the sting (of insects) or the keen teeth of animals are their weapons to defend themselves against their enemies, and the same is true for the weapon we use against our enemies. If this weapon be used appropriately it is ‘good’, but if it be used inappropriately and against friends it is ‘evil’.

Besides, there are many things that we, from their appearance, count as ‘evil’, but they are, indeed, ‘good’ like startling and warning events or infestations of pests, which awaken Man from the sleep of neglect and move him to seek the path of Allah and they are certainly not ‘evil’. Then, explaining and commenting on the subject, it says:

“And from the evil of the dark night when it comes,”

The term /qasiq/ is derived from Qasaq which, as Raqib cites in Mufradat, means ‘the intense darkness of the night which appears at midnight’ and that is why the Qur’an, referring to the end of the time of the sunset prayer, says:

Some books of lexicon have rendered the word /qasaq/ to mean ‘the darkness of the beginning of the night’ which, regarding the root of the word, seems improbable; and it is certain that the darkness of the night becomes full when it rushes into the midnight. One of the concepts that is essential for this meaning is ‘attack, or rush’. So, it has been applied with this meaning, too.

Therefore, the term Qasiq in the verse under discussion, means either ‘attacker’ or any ‘evil creature’ that uses the cover of the darkness of the night to attack, because not only the wild and biting animals come out of their dens at night and cause damage, but also filthy, defiled persons often misuse the darkness of the night for their wicked aims. The term Waqab derived from Waqb/ means ‘hole, ditch’, so, its verb with the meaning of ‘to enter into a hole’ has been used; or, it means ‘to overspread’.

“And from the evil of those who practice Secret Arts,”

The term /Naffathat is derived from Naffth/ which originally means ‘to emit a little water out of the mouth’ and since its done by blowing, the term has been applied with the meaning of ‘to blow’. But, many commentators have interpreted Naffathat with the meaning of ‘witches’ who blow on knots with a kind of incantation by which they practice sorcery, while some others have rendered the term in the sense of ‘tempting women'(3), especially their own wives, who continuously murmur in the ears of men to weaken them from doing positive actions. Examples of these women are known in history.

Fakhr-i-Razi says that some women, to influence the affections of dignitaries’ hearts, occupy their thoughts. (4) This idea is more apparent in our time than in olden times, because one of the most important means of spy-influence in statesmen and politicians, of the world, are women spies who, with their ‘blowing on knots’, and their constant temptation and communication, unlock the safes of secrets and obtain the most vital information and deliver it to the enemy.

Again, some have interpreted Naffathat to mean ‘mischievous souls’ or inciteful societies who loosen the ‘knots’ or decisions with their constant propagations. Of course, it should be noted that, apart from the former occasions of revelation, there is no trace, in the verse, to show that it properly refers to the witchcraft of sorcerers, and supposing that the verse be rendered so, it is not an evidence that the occasion of revelation is right. It only denotes that the holy Prophet (S) sought refuge to Allah from the evil of sorcerers, just like healthy people who seek refuge to Allah from the disease of cancer, though they have never been attacked by it.

This verse shows that envy is the worst and the most disgraceful quality of the wicked actions, because the Qur’an has counted it equal to the behaviour of savage animals, biting snakes, and tempter Satans.

1. The Most Important Sources of Vice and Corruption

At the beginning of this Surah, the holy Prophet (PBUH) is bidden to take refuge with Allah (SWT) from the evil of all creatures. Then, in its description three kinds of evil are pointed out:

a) the evil of

‘the dark night when it comes’;

b) the evil of

‘those who practices secret arts’

and loosen the decisions of faith, belief, and love and relations, with their temptations and evil communications;

c) the evil of the

From this short, but meaningful, explanation it is clearly understood that the main origins of evil are these three sources which should be noted, completely.

2. The Influence of Sorcery

The explanation about the reality of sorcery in old times and today, and the viewpoint of Islam on sorcery, and whether it is effective or not, is described by commenting on some other verses of the Qur’an, for example, Surah Baqarah, No. 2, verses 102 and 103. In those statements the effect of sorcery and witchcraft is somehow accepted, but, not in the form that some superstitious people talk about.

The point that should be mentioned, here is that, on the one hand, when, in these verses, the Prophet (S) is bidden to take refuge to Allah from the evil of the witchcraft of sorcerers, and the like, it does not mean that the Prophet (S) has been bewitched by their evil arts; but, it is just that the Prophet (PBUH) takes refuge to Allah (SWT) from any errancy or mistake and sin, i.e., he, under the light of Allah’s (SWT) Mercy, will be safe from the harm of those evils, and if it were not for the Mercy of Allah (SWT), the effect of witchcraft, on him, would be possible. On the other hand, it was previously said that there is no evidence to support that the objective meaning of

3. The Evil of the Envious

Envy is a hideous, evil quality which comes forth due to different factors, such as, weakness in faith, the existence of miserliness in the unity of a person, and which demands or wishes the destruction of another person’s blessing.

Envy is the origin of many great sins.

Envy, as mentioned in many Islamic narrations, eats away and destroys the faith of Man.

Another tradition from Imam Sadiq (AS) says:

“The decay of religion is envy, arrogance and pride”.(6)

This is because an envious person, in fact, protests the Divine Wisdom of why God has given such blessings to some people and has covered them under His Grace, as Surah An-Nisa, No. 4, verse 54 says:

“Or do they envy mankind for what Allah (SWT) hath given them Divine Bounty?”

For the reproach of envy, it is enough to mention, as an example, the first slaying that Man committed, in the world, where Cain killed his brother Abel, and the motive was envy. The envious ones have always been one of the hindrances on the way of prophets and Saints, and that is why the Holy Qur’an commands the holy Prophet (PBUH) ‘to take refuge with the Lord of the dawn’. Though the holy Prophet (PBUH) is the addressee, in this Surah and the next one, certainly he is an example and all should take refuge with Allah (SWT) from the evil of the envious ones.

O Lord! We, too, seek refuge in You from the evil of the envious ones.

O Lord! We ask You to protect us from being envious of others, too.

O Lord! Keep us safe and sound from the evil of those who ‘blow on knots’ and from their temptations against the path of Justice and Truth.

Source: An English Commentary in  to the Light of the Holy Quran, Volume 20, Chapter113

Commentary of Surah An-Nas: Why do we take refuge in Allah (SWT)?

Iraq: Ammar Hakim calls for formation of a balanced government in his meeting with PM

Can we say the best Ayah or should say that all Ayahs are best depending on purpose?

What is meant by inner rules in regards to reciting the Holy Quran?