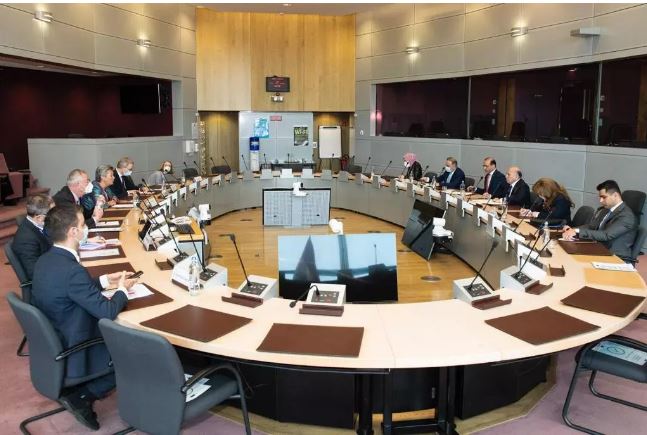 On the side-lines of his visit to Brussels, Fuad Hussein met with EU Commissioner for Home Affairs Ylva Johansson to discuss bilateral relations between Iraq and the European Union and ways to strengthen them, in particular the issue of the voluntary repatriation of displaced Iraqis.

During the meeting, the Head of the Iraqi Diplomatic Service described the Iraqi government’s efforts to deal with the issue of immigration and the measures taken to repatriate Iraqi citizens wandering in the borders of several EU member states such as Belarus, Lithuania, Poland and Latvia, adding: Iraq has repatriated 4,000 Iraqi citizens in 10 special flights.

He further stressed the importance of continuing talks with the European side on this issue and supporting the program to encourage the voluntary return of Iraqi refugees from European countries through their awareness and empowerment. Fuad Hussein also gave a brief report on the Iraqi government’s measures in combating smuggling networks and the expansion of domestic institutions to increase social awareness and explain the negative aspects of migration and its consequences.

On the other hand, Johansson stressed the depth and strength of bilateral relations and praised the role of Iraq in eliminating the terrorist group ISIS, adding: “The European Union attaches great importance to cooperation and partnership with Iraq and wants to stabilize and deepen relations between the two countries.”

He also praised Iraq’s efforts to work with the European Union and its member states to repatriate displaced citizens, saying: “Bilateral cooperation is important to reduce migration and prevent dire consequences for migrants and their families.”

EU Commissioner for Home Affairs praised the Iraqi government’s efforts to combat illegal immigration, smuggling networks and meeting all the needs for the voluntary return of migrants, and said: “This is a model for other countries to work with the EU about immigration.”

Islamic College of London: ‘Vistas to the East’ Webinar scheduled for 28 Jan 2022