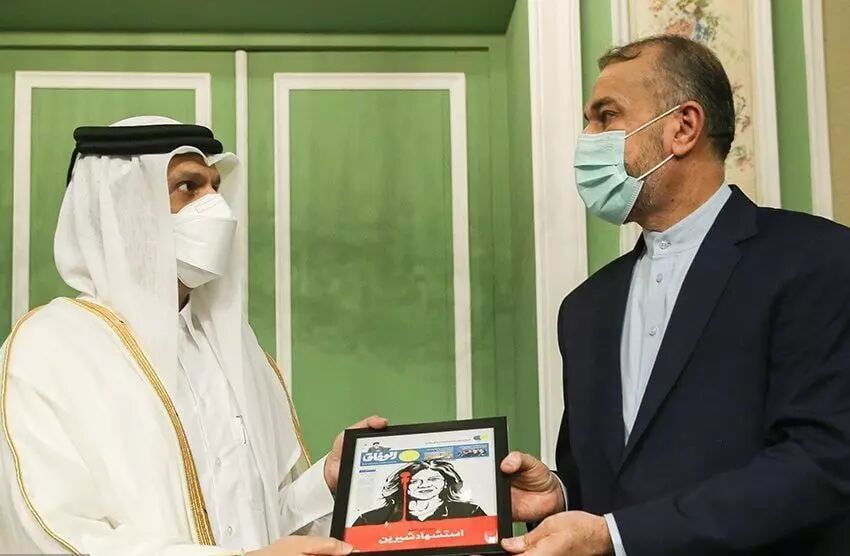 SHAFAQNA- Iranian Foreign Minister met and conferred with his Qatari counterpart on Thursday (12 May 2022). The two countries’ top diplomats in their meeting condemned the brutal assassination of Shirin Abu Akle, a Qatar TV reporter, criticizing the lack of serious action by the international and human rights organizations in such cases, as well as the double-standards adopted by them in cases of breaching the human right, such as in Palestine.

They were agreed that the premeditated assassination of reporters in Palestine proves the state sponsored terrorism of the occupier regime of the Holy Quds. The two foreign ministers were also agreed that the assassinated Palestinian reporter was wearing a reporters’ jacket at the time he was martyred, which proves the Israeli usurper forces are opposed to freedom of expression and concealing the truth about their war crimes and terrorist acts.

Hossein Amirabdollahian in the meeting asked his Qatari counterpart to convey his heartfelt consolations to the bereaved family members of the martyred Palestinian Reporter of Qatar TV, the resistant Palestinian nation, the Christian society, and the media reporters. He also delivered a plaque of honor of the martyred reporter to his Qatari counterpart to give it to the family members of Ms. Abu Akle in Palestine.

Webinar: What conversation will we have in the hereafter, according to the Quran?(Part 1)

The pioneer of the Jafari School (Video)

A video clip by Mulla Basim Al-Karbalaei on occasion of martyrdom anniversary of Imam Sadiq (A.S)