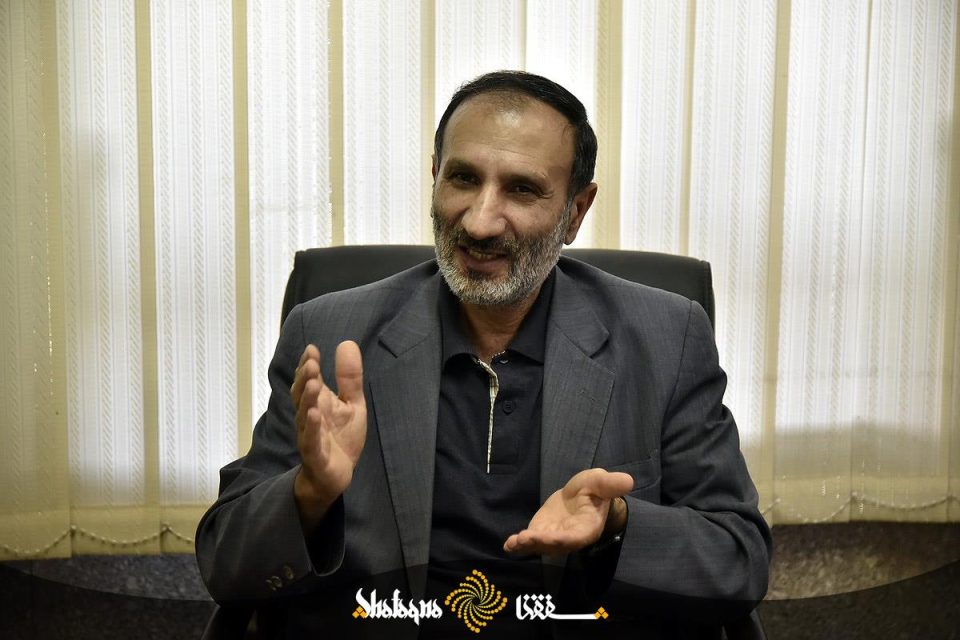 SHAFAQNA- “If you imagine Islam as a five-pointed star, Ghadir is in the center of this star, and these five points of freedom, ethics, rights, law and justice surround Ghadir. If we want to understand Ghadir and live with Ghadir, we must realize these five characteristics in life,” an interpreter of Nahjul-Balaghah said in an interview with Shafaqna.

Dr. Mustafa Delshad Tehrani, a researcher of Alawi tradition and commentator of Nahjul-Balaghah, in an interview with Shafaqna about the philosophy of introducing Imam Ali (A.S) as the successor of the Prophet of Islam (PBUH) said: “If we pay close attention to this propaganda which refers to the event of Ghadir and in almost all Shia and Sunni sources and verses 3 and 67 of Surah Al-Ma’idah, we can infer something that I think Muslims neglected a lot.”

He continued: “In verse 67 of Surah Al-Ma’idah God says: “O’ Messenger! Convey everything revealed to you from your Lord. If you do not, then you have not delivered God’s message. Allah (SWT) will ˹certainly˺ protect you from the people.”

In this verse, God communicated something important to the Prophet (PBUH), without which nothing is complete. The Shias said that this is the issue of imamate, and the Sunnis said other things. In verse 3 of Surah Al-Ma’idah, it was said that “Today I have perfected your faith for you, completed My favour upon you, and chosen Islam as your way.”

If we accept that this prayer refers to the event Ghadir, which we cannot easily reject, then we must say that something happened in Ghadir, and if that event is properly understood and paid attention to and the correct approach is taken, the Islam that God wants will be formed. God is pleased with this kind of Islam and wants that kind of religiousness.”

A correct understanding of Ghadir means a model of Muslim life

In response to the question, “why is the denial of Ghadir considered a denial of Islam?”, he said: “We all have to live with Ghadir; because this Event and the correct understanding of it means the model of Muslim life. There are different approaches to Ghadir, one approach that Sheikh Abdallah Al-Alayli talks about is a denial approach, that is, some people denied the content and nature or parts of the event of Ghadir, the other approach is historical, that is to say, this is a historical event like other historical events.

The third approach is virtuous, that is, let’s say that this event expresses the virtues of Amiral-Mu’minin (AS) and look at Ghadir from this angle. The fourth approach is emotional, meaning that we are emotionally interested in Imam Ali (AS). And the last approach is ritualistic. It means Ghadir is a ritual ceremony, we celebrate this day on the appointed date and it ends. From none of these approaches, the life and the Islam that God says that He wants and is satisfied with will not come out.”

Commentator on Nahjal-Balaghah, stating that Ghadir’s characteristics are not used in today’s world, said: “Islam and our life lack these five characteristics or are severely incomplete. Imam Ali (A.S) has a biography from the rise of Islam to the end of his reign, which he wrote himself, and fortunately, the major part of this biography has survived. From Sunni sources, the book “Al-Imamah Wal-Siyasah” attributed to Ibn Qutaybah al-Dinawari, who died in 276, contains almost the major parts of this biography.

And in the Shia sources, the books “Al-Gharat” by Ibn Hilal Saghafi, who died in 283, the book “Mustarshid fi l-imama (the guidance seeker in leadership)” by Mohammad Ibn Jarir Ibn Rustam Tabari , one of the scholars of the fourth century, and the book “Kashfal-Maḥajja li-Thamart Al-muhja” by Sayyed Ibn Tawus, who died in 664, include this biography.

In that autobiography, there is a Hadith from the Prophet (PBUH) narrated by Sayyed Ibn Tawus, as saying: “Wilayah, guardianship and leadership belongs to the one who frees.” It means that someone can be placed in the position of guardianship of people who can free people from other than God, sin, humiliation, misery and prostration.

We should re-study Ghadir, then seek to live based on it, and realize the five axes

Therefore, the essence of Wilayah and the religion is freedom, and freedom is one of the five main axes of the star of Islam. The savior, healing, justice-bringing, ethical, law-oriented and liberating Islam, is Prophetic-Alawi Islam which has gained meaning in Ghadir.

We should re-study Ghadir from this angle and then seek to live based on it, and realize the five axes. To realize these five axes, we need to extract the roadmap based on the kitab Wa Sunnah (Quran and Tradition) and implement it, then we can truly celebrate Ghadir.

Did Imam Ali (AS) differentiate between Imamate and Caliphate or not?

Delshad Tehrani in response to this question, “Did Imam Ali (A.S) differentiate between Imamate and Caliphate or not?”, said: “In the thought and behavior of Amiral-Mu’minin (AS), Imamate is a spiritual position like Risalah (mission). People neither give nor take, that is, it is not in the hands of the people. Because a person has reached a spiritual position that God has bestowed this Imamate upon him. If people deny or accept Imamate, Imamate is based on its position. But its not true about government; because it is a popular matter and is formed by the people. If the people do not want and accept someone to rule, that person cannot form a government.

Imam Ali (A.S) has many teachings about government. In the same autobiography of the Imam Ali (A.S), there is a phrase that says: “The Prophet (PBUH) said to me; O’ son of Abu Talib; Political leadership, social management and being in a leadership position is your right and is for you. If they put you in office, because the government should be based on the will of the people, they will agree with you. If this happens, take control of the people’s affairs and rule, and if they disagree and say we don’t want it, leave them alone so that they can choose whomever they want, God will provide an opening for you. Therefore, Imamate is a spiritual position, it is neither given nor taken by the people, but the government is not like that. So, Amiral-Mu’minin (AS) believes that if people turn their backs on me and do not want me, I will not insist.”

After the Prophet (PBUH), Imam Ali (AS) had a four-pronged strategy

Delshad Tehrani noted: “After the Prophet (PBUH), Imam Ali (AS) had a four-pronged strategy that all Imams also had and the methods they adopted were subject to that strategy: First, preserving the basis of religion and Islam. Second, preserving the religious community and the Islamic nation. Third, the explanation of Islam and the separation of two Islams, i.e. different kinds of Islam that were formed other than Prophetic Islam. Fourth, education of the individual and society.

If the people turned to the Imam and he took over the government, it would be suitable for the realization of these affairs, but if the people turn their backs on the Imam and these four pillars are in danger, the Imam will preserve these principles and pillars. For example; After the demise of the Prophet (PBUH), Imam Ali (AS) did not pledge allegiance to the caliphs for a while, but after a while he felt threatened and saw that the society was under threat, irreligion was spreading.

Imam Ali (A.S) in letter 62 of Nahjul-Balaghah, says: “By Allah (SWT), it never occurred to me, and I never imagined, that after the Prophet the Arabs would snatch away the caliphate from his Ahlul Bayt (the members of his house), nor that they would take it away from me after him, but I suddenly noticed people surrounding the man to swear him allegiance. I therefore withheld my hand till I saw that many people were reverting from Islam and trying to destroy the religion of Muhammad (may Allah (SWT) bless him and his descendants).

I then feared that if I did not protect Islam and its people and there occurred in it a breach or destruction, it would mean a greater blow to me than the loss of power over you which was, in any case, to last for a few days of which everything would pass away as the mirage passes away, or as the cloud scuds away. Therefore, in these happenings I rose till wrong was destroyed and disappeared, and religion attained peace and safety.”

This means that for Imam Ali (AS), it is important to preserve the basis of religion, religious society, Islamic Ummah, and explain religion, and in other words, government is a good tool, but it is not the principle.

Why we have not known the meaning and concept of Ghadir as we should?

In response to the question “why we have not known the meaning and concept of Ghadir as we should?”, Delshad Tehrani said: “There are two basic problems. First, there is a misunderstanding, and second, there is a bad and wrong approach. We have to correct understandings and approaches as much as we can. Imam Ali (A.S) is the embodiment of morality, justice, upholding rights and realization of freedom and law. Who may not want to realize these principles in the world?

Imam Ali (AS) believes that a person should have red lines in his life and never cross them; The most important red line in life is morality. “Never violate morality, do not break, do not change.” Imam Ali (AS) believes that if a person is supposed to stand on an issue and be prejudiced, it should be ethics. If we can present Imam Ali’s (AS) thought and life correctly, there will be no one who does not follow him. The way to save Muslims is the Quran and Nahjul-Balaghah. The main problem is that we did not introduce Imam Ali (AS) and Prophetic-Alawi Islam as we should. We should all start a movement to pay attention to Imam Ali’s (AS) biography and Nahjul-Balaghah.”

“Imam Ali (A.S) Was a Great Peace-Maker”: Interview With Seyfeddin Kara, Holder of Imam Ali’s (AS) Chair in Shia Studies