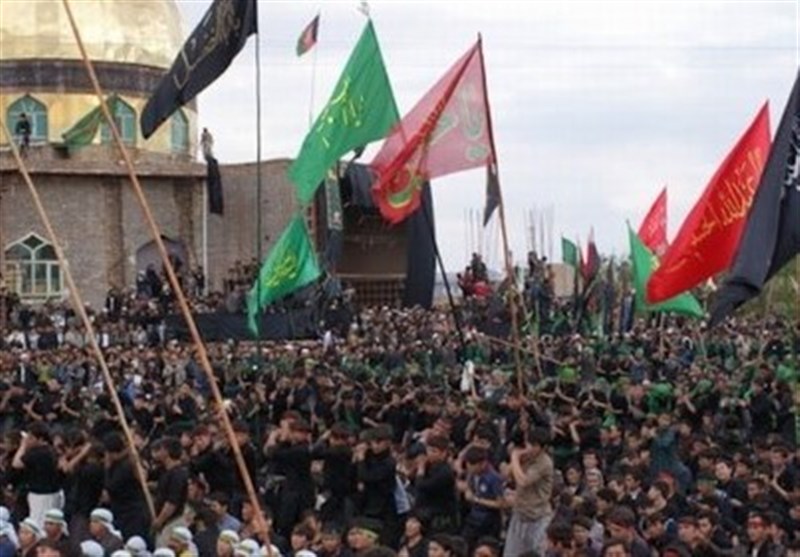 Black, green and red banners can be seen erected in many Shia Muslim majority neighbourhoods and cities in Afghanistan. They commemorate the martyrdom of Imam Hussain (AS), grandson of the Prophet Muhammad (PBUH), and many of his small band of companions in the battle of Karbala in the year 680 (61 AH of the Islamic calendar).

Several days ahead of the lunar Month of Muharram 2022, people in Afghanistan are preparing to mark the martyrdom anniversary of Imam Hossain (AS). In Kabul streets, people have held Muharram exhibitions where they provide necessities for mourning rituals.

Afghans also turn the mosques and public religious places black to express the emotion of grief on the martyrdom anniversary of their third Imam (AS). With the Taliban responsible for ensuring security, Afghan Muslims especially Shias hope that they can hold their festivities in a peaceful space.

The Hazara-Shia community in west Kabul city, particularly its sprawling neighbourhood Dasht-e Barchi, has been the target of some of the city’s deadliest attacks, especially since 2016. The community has particularly been hit hard in west Kabul, but Hazaras and Shias have also been persistently targeted elsewhere in Afghanistan.

While the former government promised to step up measures to protect the community, including a much-touted security plan for west Kabul, it failed to deliver on its promises. After the Taleban first took over in August 2021, the neighbourhood experienced a short-lived respite from attacks but has since become the scene of a new cycle of assassinations and bombings, leaving its ethnic Hazara and Shia Muslim residents particularly vulnerable to an unrelenting campaign of targeted killings.

AAN’s Ali Yawar Adili looks at the post-Republic attacks in Dasht-e Barchi and argues that the failures of successive governments to protect ethnic Hazaras and other Shia-Muslims have left the community exposed to violence, bloodshed and fear.

In this report, we take a detailed look at the attacks targeting ethnic Hazara and Shia residents of west Kabul since the Taleban’s return to power on 15 August 2021. We provide an overview of the attacks against the community, which surged from 2016 onward. These attacks have become even more widespread and systematic since 2018, targeting not only mosques and protests but also sports clubs, education centres, schools and a hospital, resulting in mass civilian casualties. Two apparent patterns emerge in the attacks targeting the Hazara-Shia population in west Kabul: the first is the use of magnetic bombs and other explosives targeting civilian passenger vehicles.

Second is large scale complex attacks, including car bombs and suicide attacks targeting places of gatherings. In the end, successive governments failed to protect the Hazara Shia community from the wave of unrelenting attacks and a security plan for west Kabul, when it finally came, was far too late to make headway into abating the brutal assaults. As attacks continue, residents of west Kabul try to cope with the toll these attacks are taking on their beleaguered community but have little hope that the country’s new rulers will take steps to finally tackle their pressing security concerns.

After a brief respite from explosions following the Taleban takeover, attacks against west Kabul’s Hazara-dominated areas resumed a little over a month after the Republic’s fall. Since then, there have been several explosions in Dasht-e Barchi and three attacks against Hazaras and Shias elsewhere in the country, two of them targeting Shia/Hazara mosques in Kunduz and Kandahar.

Shia Muslims continue to be killed by suicide attacks

While many Afghans, particularly in rural areas, might feel a semblance of deliverance from the conflict, ethnic Hazaras and Shia Muslims continue to be killed by suicide attacks, magnetic bombs and other explosive devices in west Kabul. (Attacks in other provinces will be dealt with below).

The targeted killings in Dahst-e Barchi have forced residents to adopt difficult coping mechanisms. Some have decided to retreat from the city to rural areas, suggestive of a pattern of de-urbanisation induced by continued targeted killings.  For example, Shekiba Omidi, whose sister Latifa lost her legs in the 17 November explosion, told the author on 28 December that she studied midwifery at Naser Khesraw University but had not left the house since her sister was injured. She said her family had decided to relocate to Behsud district in Maidan Wardak (because they could not afford to migrate to Iran or Pakistan) and were only waiting for Latifa to be released from the hospital.

This, she said, will also mean that they will have to leave their jobs and studies along with the urban lifestyle they are accustomed to behind. Others who remain in Kabul reported changing their patterns of movement to minimise risk. Faramarz, whose brother died in the 13 November attack, told AAN that he had asked his sister, who attends an English course at Kateb University, to walk to her classes to avoid the risks associated with using public transport. He said that he now also walks whenever he goes out.

Attacks on Shia Hazaras in other provinces

There have been at least two deadly attacks on Shia/Hazara civilians in two other provinces (Kunduz and Kandahar) since the Taleban takeover. In the first attack in Kunduz, more than 400 people had gathered for the Friday prayer on 8 October 2021 when an explosion ripped through the Sayed Abad mosque around 1:15 pm, according to a detailed Etilaat-e Roz report. The report quoted a doctor from Kunduz city saying that 150 people had lost their lives and about 200 others had been wounded in this suicide attack.

For Hazaras/Shias who may have looked to the Taleban for security after their return to power, some appear to be losing confidence in the new rulers’ ability to ensure security. Hussain, a resident of Kunduz, who lost his eldest son Ahmad Nawid on 8 October in the suicide attack on the Kunduz mosque, told the media: “The new government is unable to ensure its own security, never mind finding clues about this explosion. It cannot even tell people where these explosions originate, who the perpetrators are, and the reasons behind them. But it blames everything on ISIS.”

When Kabul fell to the Taleban, the Hazaras and Shia communities were marking the first 10 days of Muharram . The large gatherings held during this period are particularly vulnerable to attacks by both religious extremists and those using violence to achieve political goals.

In fact, Hazara/Shia majority neighbourhoods in Afghanistan had suffered deadly attacks as early as 2011, when three bombs ripped through Ashura gatherings in Kabul, Mazar-e Sharif and Kandahar, killing 80 and injuring some 160 worshippers

In response, community leaders, including the Ulema, anxious to ensure security, have taken steps to protect the community. For example, on 2 August 2021, members of the Shia Ulema Council, the High Council for Regulating Religious Affairs and the Commission for Security Coordination of Religious Ceremonies met with former Second Vice President, Sarwar Danesh, to discuss security measures for the August 2021 Muharram ceremonies.

Security forces will likely be on high alert across Afghanistan through at least Aug. 8 for the Shi’a Muslim observance of Ashura, which begins late Aug. 7. Dates may vary slightly according to lunar sightings. Shias will stage mourning processions to and from Imambargahs (traditional Shi’a congregation halls), Mosques, and other sites from July 29 through Ashura, when the largest congregations will occur.

Authorities will likely elevate security around all Shia religious sites and near procession routes, especially in major urban centers with significant Shia populations, such as Herat, Kabul, and Mazar-e-Sharif.

#OneShiaOneMessage: Only Imam Hussain (AS) can change a desert into a heaven [photos]