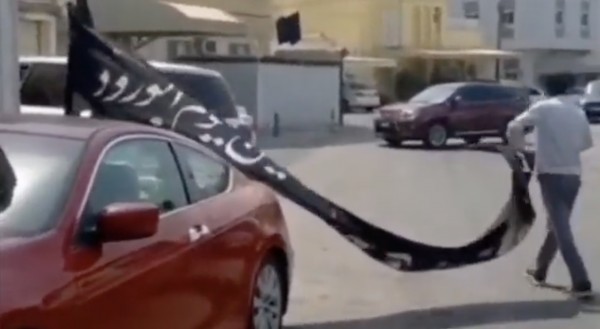 SHAFAQNA- The security authorities in Bahrain continued their harassment against Shias and removed Ashura manifestations in Salman City and Al-Houra, according to video clips taken by activists.

On the fifth day of Muharram (Wednesday, August 3, 2022), forces affiliated with the Interior Ministry deployed along with municipality workers in Al-Houra and Salman city and took down Ashura signs and banners.

Interior Ministry forces were heavily found in Hamad City, fourth roundabout, near Al-Zahraa Mosque and harassed mourners. It was noticed that one of its members picked up the Israeli flag from the ground, where it had been placed by activists to emphasize the popular rejection of normalization with the occupying entity.

Since 2011, security authorities have intensified their campaign against Shiites, who constitute the majority of Bahrain’s population, moving from politically targeting them to fighting them religiously, harassing them and imposing restrictions on their religious practices.

Bahraini authorities are intensifying their religious targeting against Shiites during the Ashura season, which is commemorated by Shia all over the world as part of massive events marking the martyrdom of Imam Hussein bin Ali (AS).

Bahrain: Over 200 HR Violations on Anniversary of Feb. 14 Uprising