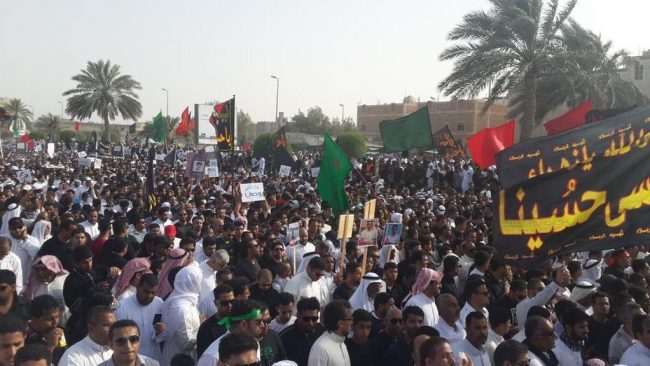 SHAFAQNA- Yesterday, the Saudi government issued a decision prohibiting the mourning processions of Sayyid Al-Shuhada (AS) in the streets of Qatif, Mirat Aljazeera new wrote.

The Saudi government has announced that the passing of mourning processions is forbidden in the streets and this ceremony should be held only inside the Hussainiyas.

According to this report, the Public Investigation Department of Saudi Arabia, through the endowment and heritage departments in Qatif province, has imposed severe restrictions on the people as Muharram nights approach and interpreted it as “special protocols for holding the Ashura ceremony”.

The website continued: The officials of the Muharram mourning ceremony in Qatif province must commit these protocols and take responsibility for any violation of it. In addition to this, the owners of the Hussainiyas must also register with the endowment and heritage department of this country before holding the ceremony.

In addition, the Saudi government has banned the installation of the Ashura flag in the streets and public squares and even houses and buildings and has announced that the mourning processions of Imam Hussain (AS) should be held at specific times and with the presence of few people.

The government of Saudi Arabia has also asked Hussaini preachers not to address the topics that it calls “controversial” and has set principles for their speeches. Installation of loudspeakers in Mosques, Hussainiyas and places of mourning is also prohibited.

Iraq: 3 conditions of the coordination framework for agreeing to hold early elections