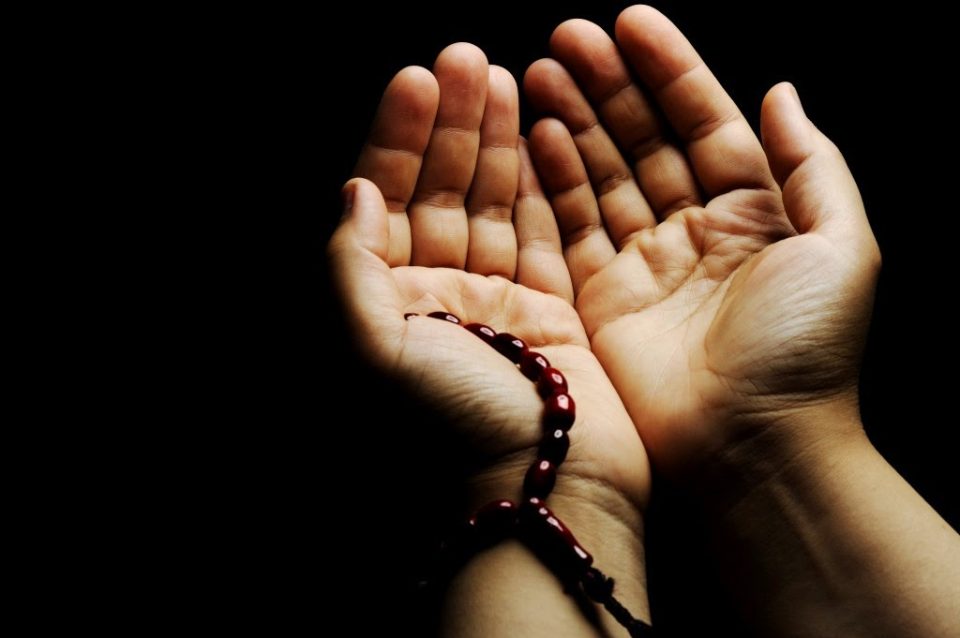 O’ Allah (SWT), complete (the integrity of) my intention through Your grace, rectify my certainty through what is with You (the knowledge and power), And set right what is corrupt in me through Your Power!

Commentary: Imam Sajjad (AS) beseeched Allah (SWT) to enrich the sincerity of his intentions by Divine Grace and rectify his certainty with God’s power and knowledge and set right what is corrupt in him through Divine Power!

Intentions can be put into four categories. The first category is to show off, which is the worst possible intention. The second and third categories are to gain eternal rewards or ward off eternal punishment. They are good intentions, but not the best ones because they imply that we would neither do good nor ward off evil if it were not for the promise of eternal rewards and punishments, respectively. The fourth category is to seek the pleasure of Allah (SWT), which is the best one, as alluded to in verse 76:9 (Al-Insan):

Earlier, the Imam prayed to Allah (SWT) to grant him the best intentions (أَحْسَنِ النِّيَّاتِ). In this portion, the Imam asks Allah (SWT) to enrich the sincerity of his intentions, which are explained in the following paragraph.

Imam Sadeq (AS) stated, “People with a submissive heart to Allah (SWT) have honest and sincere intentions. An individual whose mind is free from lustful desires and temptations can purify his intention for Allah (SWT) in all affairs,[1],[2]”. The Arabic text Hadith in Appendix 1.

A mother’s intention to care for her child is rich in sincerity. She cares tirelessly for her children’s well-being without expecting reward or gratitude in return. The poem “The Mother’s Heart” by Iraj Mirza beautifully portrays the feelings and love of a mother for a child. The translation of the poem is as follows:

A boy killed his mother at his lover’s request and took the mother’s heart to her. While he was going to see his lover, he tripped on a stone, fell on the ground, and scratched his hands and feet. He stood up, cleaned his clothes, and saw his mother’s heart on the ground. He bent over and picked the heart, and as he was picking it, he heard the heart was saying, “Ah, my son got a scratch on his foot and hand[3].” This fictitious story portrays the unconditional love of a mother for her child.

I use this poem to portray the unconditional love and affection between submissive hearts and Allah (SWT). Imam Sajjad (AS), in one of his supplications, says[4]:

I swear to your honor and majesty if your satisfaction is that I get slaughtered into pieces and killed seventy times in the worst and most brutal way, your pleasure will be dearer to me! Indeed, sincerity is very pure and rich for an individual with that mindset.

In the tragedy of Karbala, on the afternoon of the day of Ashura, all of Imam Hussain’s (AS) companions were martyred. The army of Umar ibn Sa’d encircled him and began throwing endless arrows; eventually, the Imam was fatally injured and fell to the ground. He was bleeding to death without the strength to fight. In those moments, he put his face on the sands and said[5]:

I endure your decree patiently, my Lord! There is no god but you, O’ refuge of the helpless!

The Imam (AS) no longer minds his pain and suffering, or the losses of his sons, brothers, and companions, and his family’s captivity after his martyrdom. Only the satisfaction of his Lord was on his mind. This was the utmost sincerity that Imam Sajjad (AS) was seeking.

In the following phrase, the Imam requested of Allah (SWT):

O’ Allah, rectify my certainty through what is with You (the knowledge and power)

Certainty is not immune from the plague. For instance, according to Islamic traditions, greed, carnal lust, desires, and the love of worldly materials weakens certainty. Imam Ali (AS) said, “Mixing and socializing with worldly people ruins the face of religion and weakens certainty[6],[7].”

Hence, the Imam prayed to Allah (SWT) to amend possible causes that could undermine his certainty and turn it to doubt. Hence, in the 9th supplication of Sahife Sajjadiya, the Imam requests of Allah (SWT)[8]:

O’ Allah, bless Mohammad and his Household. Assign the whisperings of our hearts, the movements of our limbs, the glances of our eyes, and the idioms of our tongues, to that which makes incumbent Your reward. Lest a good deed slip by us, through which we might deserve Your repayment, or an evil deed remain with us, by which we might merit Your punishment!

In this last phrase of prayer, Imam Sajjad (AS) implored Allah (SWT) to intervene with His power and amend affairs that were not going in his favor. This includes physical health, spiritual wellbeing, family, social and political problems, difficulties, hardship, trial and tribulation in life, safety, security, etc.

O’ Allah…set right what is corrupt in me through Your power!

Several avenues may bring misfortune to life. Among them is neglecting the remembrance of God, even as much as the blink of an eye. An instance is the story of Prophet Yunus and Prophet Dawood, which are mentioned in 87:21 (Al-Anbiya) and 38:22 (Sad), respectively.

Prophet Yunus preached to and invited the People of Nineveh for forty years; however, these teachings fell on deaf ears. He was often ignored and had very few followers, which led to incredible frustration and anguish. Consequently, he angrily left his people, boarded a ship, and left the city, while he should have been resilient and patient in inviting people to the divine teachings. Verse 87:21 (Al-Anbiya) says:

87:21:  Dhun Nun went away in anger and thought that We would never have power over him,

There are two different narrations of how Prophet Yunus ended up in the belly of the whale. One of the narrations describes a great storm that began to engulf the vessel, threatening to send it below the sea. The crew, sensing impending doom, suspected that a sinner was amongst them that caused the waves to crash upon the ship.

They decided to cast lots, or to draw straws, to see who amongst them was responsible for this calamity. Three separate lots were drawn, and each time Prophet Yunus was chosen. He was immediately cast upon the sea, where a whale engulfed him.

The second narration describes that during the ship’s voyage, a great whale blocked its path and opened its mouth in a gesture of hunger. The crew, fearful it was to be swallowed whole, suspected that there was a sinner on their ship that the whale was after. Like the previous narration, three separate lots were drawn, and Prophet Yunus was chosen each time. He was cast upon the sea, where the whale swallowed him.

Realizing his poor judgment, Prophet Yunus asked for forgiveness while he was in the belly of the fish:

87:21:  In darkness he cried, “Lord, You are the Only God whom I glorify. I have certainly done wrong to myself (so forgive me)“.

Allah (SWT) responded favorably to his prayer, saved him, and returned him to his nation[9].

In the supplication for the 17th day of Ramadhan, we implore Allah (SWT) and ask God[10]:

O’ my God! Please do not leave me to myself even for the twinkling of an eye. Please do not make me needy of any of Your creatures. Please establish my heart firmly on Your Obedience.

We are social beings living together, and the good and bad behavior of others affects us naturally. Unfortunately, in every community, seemingly benevolent people commit evil to preserve their worldly interests and then promote it as the reformation of the welfare of humanity. In these circumstances, one must be vigilant to understand their deception and take precautionary measures to protect members of their family, community, and society. The Prophet (PBUH) had a similar issue with hypocrites, as mentioned in verse 2:11 (Al-Baqara):

2:10-11 And when it is said to them, “Do not cause corruption on the earth,” they say, “We are but reformers.” Unquestionably, it is they who are the corrupters, but they perceive [it] not.

The other avenue is the prevalence of human desire and egos over intellect. Verse 45:23 (Al-Jaathiya) states:

45:23 Have you seen him who takes his low desire as his god (his goal in life is to please himself and his desire). And Allah (SWT) has knowing him as such left him astray and sealed his hearing and his heart (and understanding) and put a cover on his sight. Who, then, will guide him after Allah (has withdrawn Guidance)? Will you then do not receive admonition?

The Quran does not condemn desire if it has been used within the framework ordained by Allah (SWT). A person without desire is depressed and should seek medical advice and treatment. Experiencing desire is God’s blessing; a desire for success, wealth, power, and family are all God’s blessings. If you do not desire to maintain your power in society, you will become a doormat for others.

Human beings will benefit from desire if they have the willpower to control it. Otherwise, the feeling of desire is like a ticking bomb looking for an opportunity to destroy them. When desire overwhelms intellect, human beings become irrational, and their actions no longer makes sense.

Among people whose desire prevailed and destroyed their unique contribution to the advancement of Islam were Talha and Zubayr[11], who waged the Battle of the Camel against Imam Ali (AS) under the disguise of seeking to avenge the assassination of the third caliph, Uthman. The reality was that Talha and Zubayr showed hostility toward Imam Ali (AS) since he refused to grant them the governorship of Kufa and Basra, two cities in Iraq[12].

Another personality is Umar ibn Sa’ad (عمر بن سعد‎), who was a clergyman and worked for Bani-Umayyah’s dynasty. He was the son of Sa’ad ibn Abi Waqqas who defeated the Sassanid army and conquered the emperor of Persia.

Ubayd Allah ibn Ziyad (عبيد الله بن زياد‎) asked Umar ibn Sa’ad to lead an army of 4,000 horsemen towards Karbala to fight with Imam Husain (AS). Umar ibn Sa’ad had no military experience. But, his religiosity, being the son of the companion of the Prophet, would disguise Yazid’s evil treachery. Before that, Ubayd Allah ibn Ziyad had promised the governorship of Ray to Umar bin Sa’ad.

Umar ibn Sa’ad excused himself from this mission. Ubayd Allah ibn Ziyad agreed with his request and asked him, in this case, to relinquish the post of governorship as well.

Sleep disorders and risk of death

USA: Friday sermon and prayer at Islamic House of Wisdom in Dearborn [video]

Commentary on the Quran (Chapter 3:13) [Divine Help in the Battle of Badr]

Commentary on Imam Sajjad’s (AS) Treaties of Right: The Right of Private Parts (9th)

Commentary of the Quran (Chapter 3:12)

The Right of Stomach: Commentary on Imam Sajjad’s (AS) Treaties of Right (Part 8)

Webinar: Commentary on Dua Makarim Akhlaq By Imam Sajjad (AS)

Commentary on the Quran (Chapter 3:8-9) By Mohammad Sobhanie

UN: Israel continues to defy a Resolution by UN to halt illegal settlements