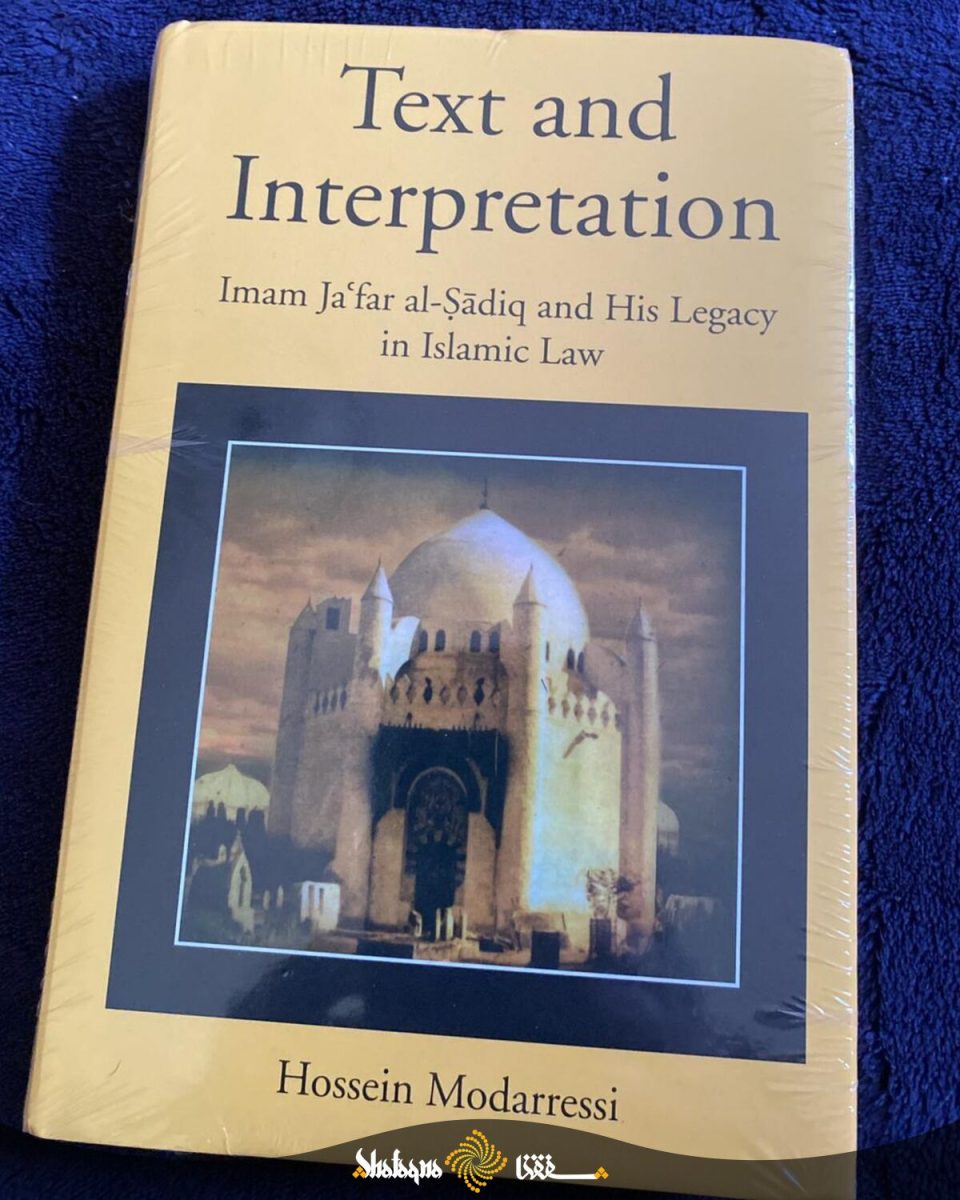 SHAFAQNA- The book “Text and Interpretation: Imam Jaʿfar Al-Ṣādiq and His Legacy in Islamic Law” by Hossein Modarressi is published on August 9th, 2022 by Harvard University Press as a volume of Harvard Series in Islamic Law.

The book examines the main characteristics of the legal thought of Imam Jaʿfar Al-Sadiq (AS), the sixth Shia Imam. This book presents an intellectual history of how the Jaʿfari School began. The Jaʿfari School expanded the tools for legal interpretation generally and contracts specifically, to a degree unmatched by any of its counterparts in the Muslim legal tradition. In addition to sketching the origins of the school, the book examines Imam Jaʿfar Al-Sadiq’s (AS) interpretive approach through detailing his position on a number of specific questions, as well as the legal canons, presumptions, and other interpretive tools he adopted.

A research in the history of thought

In an online meeting held to briefly introduce this book, Dr. Hossein Kamaly, the holder of the Imam Ali (AS) Chair in Shia Studies at Hartford International University, said: “As the author himself said, this book is a research in the history of thought. The subject of the book is the description of the legacy of the school of Imam Ja’far al-Sadiq (AS) with emphasis on the formation period of the Ja’fari School of thought in the second to fourth centuries of Hijra.

“It has been emphasized in this book that Imam Ja’far Sadiq (AS) was a moderate person in thought and action. In addition, a famous saying from the book of Rijal Al-Najashi is cited, which says: ‘Wherever there is a difference of opinion about the Prophet (PBUH) in the news received, the Shias follow Imam Ali’s (AS) words and opinion, and wherever there is a difference of opinion about Ali (AS) in the news received, they follow the words of Ja’far ibn Muhammad Al-Sadiq (AS),” he added. “From this point of view, this book, in its approach, emphasizes on the jurisprudential thought of Imam Sadiq (AS) with esoteric views which are also attributed to Imam Sadiq and his father Imam Baqir (AS).”

The holder of the Imam Ali Chair in Shia Studies further explained: “This book starts with a very detailed and informative biography about Imam al-Sadiq (AS). We know that he was born in 80 or 83 AH and died in 148 AH. His mother, as mentioned here, is the daughter of Qasim bin Muhammad bin Abi Bakr, the same Abu Bakr. That is, he is both a descendant of Imam Ali (A.S) and a descendant of Abu Bakr and his grandfather, is Qasim bin Muhammad, who passed away in 107 AH. It should be noted that Muhammad bin Abi Bakr was one of Imam Ali’s (AS) loyal companions. After this long chapter, three chapters deal with Ja’fari jurisprudence.”

“One of the important points in the chapter of Imam al-Sadiq’s (AS) life is the discussion about the Hadith Forgery and it shows that forgery in hadith has been an issue and a problem that has been formed since the beginning of hadith transmission,” he added. “At the end of the book, there is a one-page conclusion that sums up Imam Sadiq’s (AS) moderate attitude and it is from his words: “It is our (the Imam’s [A.S]) concern to put forward the principles and it is your task to extract from them the branches.”

Hossein Modarressi is Bayard Dodge Professor of Near Eastern Studies at Princeton University. He has two completely different courses of education. Firstly, at the Islamic seminary at Qom (Iran) where he received a complete traditional Islamic education in Arabic language and literature, Quran and hadith, Islamic philosophy, theology, and law. Then, he pursued his secular education which ended with a PhD in Islamic law from Oxford University. He came to Princeton first as a visiting professor in 1983 and was appointed to the Princeton faculty in 1986.

Professor Hossein Modarressi is the author of many books and articles in English, Arabic, and Persian. His books in English include Kharaj in Islamic Law (London, 1983), An Introduction to Shi’i Law (London, 1984), Crisis and Consolidation in the Formative Period of Shi’ite Islam (Princeton, 1993), and Tradition and Survival, a Bibliographical Survey of Early Shi’ite Literature (Oxford, 2003).

Book: “Hussain And the Struggle For Justice” By Chris Hewer [Video]

Book: “Who is Hussain (AS)?” by Mehdi Saeed Hazari

Book: “Hussain And the Struggle For Justice” By Chris Hewer [Video]