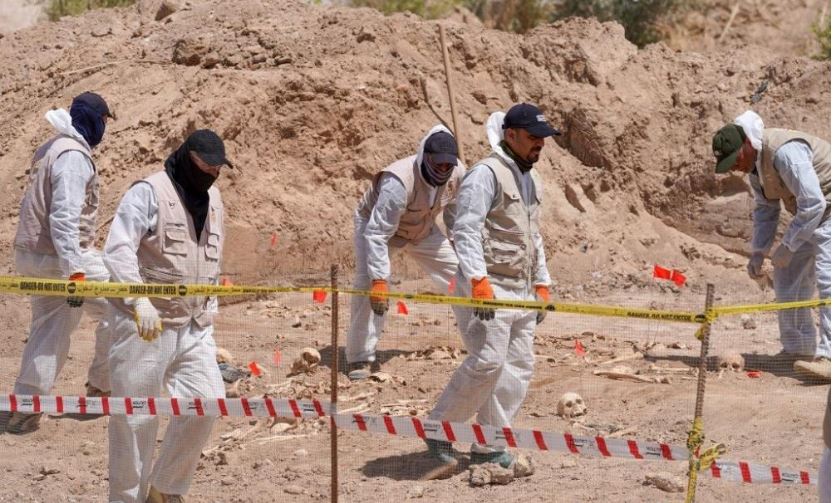 SHAFAQNA- Najaf Ashraf Martyrs Institute announced the discovery of the mass grave of 20 martyrs related to the Shabaniyah Intifada, who were buried alive by the Ba’ath regime in 1991.

Haider Khadir Khattar, Head of Mass Graves Division in Najaf Ashraf Martyrs Institute, said: “Preliminary investigations show that these bodies are related to the 1991 Shabaniyah intifada against the previous regime, and most of the bodies belong to young people, and no documents accompanying them have been discovered.”

Khattar said: “It is likely that these people were buried alive by Saddam’s henchmen because there are no traces of gunshots.” He emphasized: “The bodies of the martyrs were sent to forensic medicine for DNA testing to identify their families through the samples of the families of the martyrs of the Shabaniyah Intifada that are in this center.” Khattar said: “Najaf Ashraf has 8 to 9 mass graves, three of which have been discovered in the north of the province so far, and all of them are related to the events of the Shabaniyah intifada.”

The Shabaniyah Uprising or the Shabaniyah Intifada was the uprising of the Iraqi people against the Ba’ath regime, which covered the entire country from north to south. This uprising took place at the end of the Persian Gulf War and Security Council Resolution 670, which banned all air movements of the Iraqi army, even helicopters, and as a result, the control of most of the country fell into the hands of popular forces.”

Out of the eighteen provinces of Iraq, fourteen fell and among them only the central provinces, including the western provinces, Salah al-Din and Baghdad, remained in the hands of the Ba’ath regime. Despite all this, the uprising was severely suppressed by the military forces of Saddam Hussein and his loyalists in the Iraqi presidential guard. The central parts of the city of Karbala, which was one of the cores of the popular resistance, were turned into ruins, and the shrine of Hussain bin Ali (AS) was hit by several bullets. During these conflicts, thousands of people were killed and nearly two million people were displaced from Iraq.”

Dissatisfaction of the people, the destruction and damage of Iraq’s economic and welfare infrastructure in the war with Kuwait and Iran have been factors in the uprising of the Iraqi people against Saddam Hussein.

Iraq: Karbala International Airport to start operating by the end of 2023