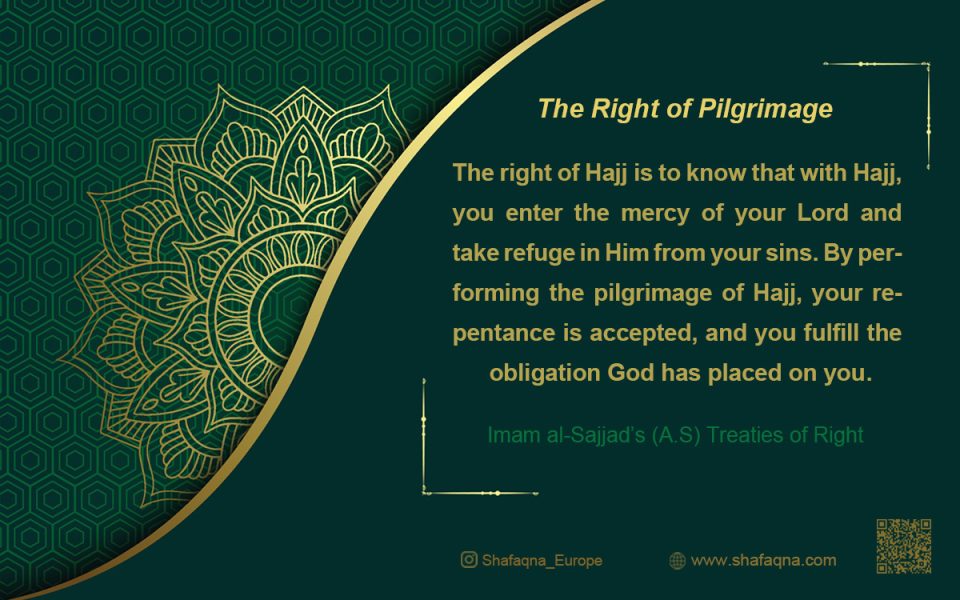 SHAFAQNA-The Right of Pilgrimage 12th: Commentary on Imam Al-Sajjad’s (AS) Treaties of Right by Mohammad Sobhanie.

The Right of Pilgrimage

The right of Hajj is to know that with Hajj, you enter the mercy of your Lord and take refuge in God from your sins. By performing the pilgrimage of Hajj, your repentance is accepted, and you fulfill the obligation God has placed on you.

The Arabic word “Hajj” means intention and implies the intention to perform the pilgrimage of the Kaaba in the month of Dhul-Hijjah. Eligible Muslims are obligated to perform Hajj at least once in their lifetime [1].

The Kaaba is the first house of worship built on the earth by Prophet Adam (AS) [2]. It was destroyed in the Flood of Noah (AS); later, Prophet Ibrahim and Ismaeel (AS) rebuilt it by the command of Allah (SWT) [3].

Hajj represents Islam’s majesty, embodies its strength, and revitalizes a sense of equity, unity, brotherhood, and sisterhood amongst Muslims. Amiral-Mu’minān (AS) called Hajj the symbol and an essential slogan of Islam. He said in the last hour of his life [4]:

(Fear) Allah (SWT) regarding your Lord’s House (Kaaba). Do not forsake it so long as you live because you will not be spared if it is abandoned.

In Hadith 252, Amiral-Mu’minān (AS) mentioned that Hajj strengthens the religion [5]. Imam Sadeq (AS) said [6] “Islam is alive and vibrant as long as the Kaaba is standing.” In verse 5:97 (Al-Ma’idah), the Quran states, “Allah has made the pilgrimage to the Kaaba a means of support and sustenance for the collective life of people. [7]”

Hajj pilgrims don themselves with two pieces of simple and primitive cloth called Ihram and set forth to perform the rituals of Hajj. All men and women, regardless of race, skin color, and socioeconomic status, are valued the same in the presence of Allah (SWT). The only human merit is piety and righteousness [8]. Malcolm X observed this unique experience during his famous pilgrimage of Hajj in 1963, as written in his autobiography.

In a letter to his assistants in Harlem, he wrote [9], “Never have I witnessed such sincere hospitality and overwhelming spirit of true brotherhood as is practiced by people of all colors and races here in this ancient Holy Land, the home of Abraham, Muhammad, and all the other Prophets of the Holy Scriptures. For the past week, I have been utterly speechless and spellbound by the graciousness I see displayed all around me by people of all colors.”

“There were tens of thousands of pilgrims from all over the world. They were of all colors, from blue-eyed blondes to black-skinned Africans. But we were all participating in the same ritual, displaying a spirit of unity and brotherhood that my experiences in America had led me to believe never could exist between the white and non-white.”

Pilgrims being unified through the Ihram resembles the resurrection on the Day of Judgement. On that day, everyone will rise from their graves and appear before their Lord, realizing nothing such as wealth and family ties will benefit them except for righteous deeds [10],[11],[12].

One might ask why Allah (SWT) placed Kaaba in a barren land. Why didn’t God put it, for instance, next to a beach or land with good weather and scenery?

Had Allah (SWT) put the Kaaba in a climate with good weather and beautiful scenery, it would not be clear whether people were going for Hajj for a vacation or pilgrimage. Placing the Kaaba in a location with little worldly attraction guarantees that people’s intention for Hajj is obedience and servitude to their Lord. Amiral-Mu’minan (AS) answered this question in sermon 192 of Nahjul Balaghah [13]:

“Allah (SWT) has tried all the people, from Adam till the last ones who would come to this world, with stones that yield neither benefit nor harm, neither see nor hear. He made those stones into God’s sacred house, the source of strength and stability in people’s social and political life.”

“God placed the Kaaba in a barren land, in narrow valleys between rugged mountains, with plenty of soft and loose sandy soils, springs with little water, and scattered habitats. Neither camels nor horses nor cows and sheep can prosper in this land. Then, God commanded Adam and his sons to turn their attention toward it.”

There is a prerequisite for the acceptance of Hajj. Amongst them is that the expenses associated with going to Hajj must be from halal earnings. The Prophet (PBUH) stated that “Whoever goes to Hajj with forbidden wealth, when he says: ‘O’ God, I am in your service,’ Allah (SWT) will reply to him, ‘We do not accept your service, and you are not welcome [14],[15],[16].’”

Malik ibn Anas [17] says that they were on a Hajj journey with Imam Sadiq (AS). The Imam donned the garment of Ihram; whenever he wanted to say “Labbaik”, a stressful anxiety engulfed him.

Malik ibn Anas noticed the Imam’s unease and said to the Imam (AS): “O’ son of the Messenger of Allah (SWT), it is inevitable that you should say the Labbaik .” The Imam (AS) replied:

“O’ son of Abi Amer! How can I dare to say, “Labbaik” while I am afraid that Allah (SWT) might answer that I do not respond to your call, and you are not welcome here [18]”?

Part of a Series: Commentary on Imam Al-Sajjad’s (AS) treaties of right

The Right of Fasting: Commentary on Imam Sajjad’s (AS) Treaties of Right (Part 11)

France will not boycott World cup 2022

Hadith Graph: “Allah (SWT) made faith to purity you from polytheism”