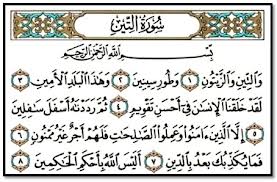 SHAFAQNA- I was pondering on Surah Wat-Tin and want to know what do we make out with the swears of Allah. What does what does “Wat-Tin”ِ represent? Is it because of fruit’s ingredients, or it is a symbol of the Prophet of that area that it is grown or the land where it is grown? Is there any other interpretation? Similarly what does Waz-Zaytoon represent? And what does the next verse “wa tur-e senin” symbolize? Then we have وَهَـٰذَا ٱلۡبَلَدِ ٱلۡأَمِینِ what does it symbolize? What is the connection between these swears of Allah and Insan (man)? Do they have any link to Imam Zamana and his Zahoor? Can we say that probably وَهَـٰذَا ٱلۡبَلَدِ ٱلۡأَمِینِ can mean that it is the city where Imam Zamana will reappear. Or is there any other tafseer of this surah? What lessons can we draw from this sura for ourselves? Please reply at the earliest. Wassalam,