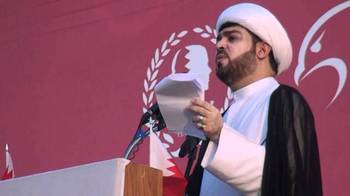 SHAFAQNA – Bahrain’s main opposition movement, the al-Wefaq National Islamic Society, has censured the Al Khalifah regime’s suspension of its activities, saying that the move is illegal.

On Wednesday, al-Wefaq Deputy Secretary General Sheikh Hussain al-Daihi said that the suspension shows Manama’s inability to separate the people from the bloc.

He also called on the international community to take action to end the regime’s crackdown on dissent.

Meanwhile, various human rights organizations have condemned the ban, labeling it is part of a new crackdown on dissent.

On Tuesday, the Bahraini Justice Ministry announced in a statement that the kingdom had suspended all activities by the al-Wefaq in the Persian Gulf country.

Al-Wefaq Secretary General Sheikh Ali Salman has been in prison since December 2014 on charges of attempting to overthrow the regime and collaborating with foreign powers, which he has denied. A court sentenced him to four years in prison in June 2015.

Since February 2011, thousands of anti-regime protesters have held numerous demonstrations on an almost daily basis, calling for the Al Khalifah regime to relinquish power.

In March that year, troops from Saudi Arabia and the United Arab Emirates were deployed to the country to help in the crackdown on peaceful protests.

Unethical Journalism - Why is The Independent trying to stir controversy about al-Nimr family?