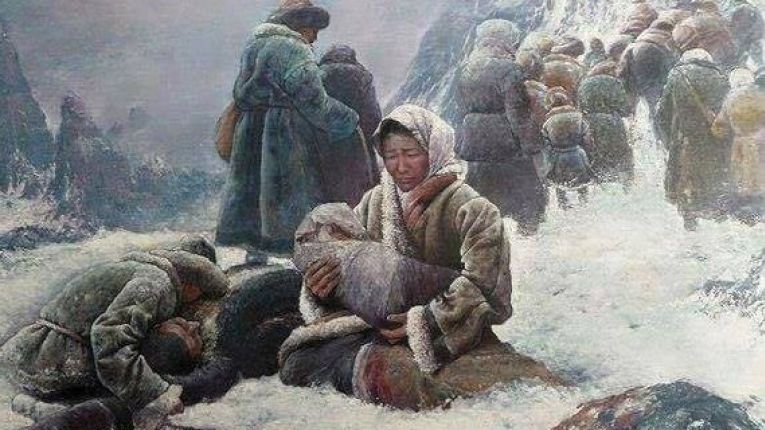 SHAFAQNA – A century ago today, Tsar Nicholas II issued a decree to draft farmers, herders and nomads in central Asia into the Russian army to fight on the front in eastern Europe. The conscription order came at a time that was vital for the indigenous people of the region to attend to their crops and livestock to support their families.

As a result, a rebellion broke out, with local lords in two regions, Kemin and Kochkor, proclaiming independent khanates. Around 4,000 ethnic Russians living in the region were killed in the wave of violence. This prompted the Tsarist administration in St. Petersburg to send an army of Cossacks to suppress the uprising.

Hundreds of thousands of ethnic Kyrgyz and Kazakhs attempted to flee the brutal crackdown by crossing the formidable Tien-Shan Mountains on their way to China. Those who escaped slaughter at the hands of the Cossacks eventually perished on the road, freezing to death at altitudes between 3,000 and 4,000 metres above sea level.

Today, the Bedel Pass leading to the Chinese border is littered with the bones of at least 100,000 people who died while making the fateful journey in August 1916. Some scholars say that as many as 250,000 may have died. The incident is referred to as the ‘Urkun’ in the Kyrgyz language, meaning the ‘Great Exodus.’

Survivor Bayali Isakeev, a former official in the Kyrgyz Autonomous Soviet Socialist Republic, recorded his traumatic experience in a book published in 1933:

“We were forced to move on through the Bedel Pass at night. First I helped my mother and sister with a loaded camel make it along the narrow path. The path was slippery, almost entirely covered with snow, the slopes with ice. Below there were steep, yawning chasms. One false step meant certain death. I luckily led my mother and sister [along the path] and returned for my brother, who was halfway through the pass with our bull, loaded with our household possessions. On the way back we could see the crevasses filling up, nearly to the top in some places, with the bodies of camels, horses, cattle that had slipped over the side, and often people were there also.”

An investigation into the incident by the Russian State Duma in December 1916 led by Alexander Kerensky, who later went on to lead the Mensheviks, found that “the nomads were mercilessly exterminated by tens of thousands, consistently and systematically.”

Prior to the incident, thousands of Kyrgyz had already started fleeing their homelands as Russian settlers continued to expand into central Asia in the late 1800s, seizing farmland from the locals.The Russians had previously quashed rebellions led by Kyrgyz Mullah Iskhak Hazan between 1873 and 1876, as well as another revolt in Andijan under the leadership of Naqshbandi Sufi Sheikh Dukchi Ishan. Following the rebellion of 1916, the Russians launched a renewed offensive which lasted till 1921. To this day, no one knows for sure how many Kyrgyz were killed during that period.

“There are various estimates; some put the number of victims, including those killed by the punitive expeditions and those who died of starvation, exposure, and diseases, at 40,000 people…while others claim that at least 150,000 Kyrgyz were killed by the punitive expeditions and many more died of starvation and exposure,” a source familiar with the topic told TRT World.

The rebellion was finally brought to an end when the Basmachi Movement, which was at the time fighting under Turkish commander Enver Pasha, was defeated by Russian forces in the Battle of Kafrun in 1922.

Is it a genocide?

Despite the extent of the trauma inflicted on the Kyrgyz people, political correctness has prevented the labelling of the incident as a genocide.

Research on the matter had largely been discouraged in Kyrgyzstan, which remained part of the Soviet Union until its collapse in 1991. Kyrgyz historian Tyntchtykbek Tchoroev wrote in his essay ‘Historiography of Post-Soviet Kyrgyzstan’ that work by Professor Kushbek Usonbaev on the topic was confiscated from the state-run publishing house in Kyrgyzstan in 1982.

Even after independence, Kyrgyzstan avoided using the word ‘genocide’ to describe the incident for the sake of maintaining warm ties with Russia. In a decree read out on May 27 last year, Kyrgyz President Almazbek Atambayev called for “an objective historical evaluation of the reasons and consequences of what happened,” but stopped short of demanding a Russian apology.

Aminat Chokobaeva, a PhD student at Australia National University’s Centre for Arab and Islamic Studies, told TRT World that using the term ‘genocide’ presents a number of problems for the Kyrgyz government.

“Genocide is a very fraught term, so the Kyrgyz authorities are generally reluctant to use it,” Chokobaeva said. “First of all, the Kyrgyz government wants to maintain a good relationship with Russia. Second, the Kyrgyz rebels killed more than 3,000 Russian settlers, which makes some scholars (both Kyrgyz and Russian) insist that it was an act of mutual aggression rather than a genocide of the Kyrgyz. Of course, the number of the Kyrgyz victims is much higher.”

Speaking to EurasiaNet, the director of the International and Comparative Politics Department at the American University of Central Asia in Bishkek, Medet Tiulegenov, said Atambayev only promoted the commemoration “because if he does not, others will make it their own.”

There have been growing calls in Kyrgyzstan, particularly among the nationalist minority, for an official apology from Russia. An independent public commission which was set up in August last year by the former deputy prime minister of Kyrgyzstan’’s interim government, Azimbek Beknazarov, also demanded the incident be recognised as a genocide. But these calls were dismissed by Russian diplomatic staff in Bishkek as the demands of a “mere meager” group seeking to incite “ethnic divisions.”

In 2014, the Russian Foreign Ministry’s Gorchakov Foundation agreed to fund a group of local Cossacks to research the incident, but Kyrgyz nationalists such as Ata-Jurt Party lawmaker Jyldyz Joldosheva, who wants to make a documentary about the Urkun, doubts such research will be objective.

“Lately, it has become fashionable to distort history. How truthfully will the Gorchakov Foundation study this event? This is a big question,” she told EurasiaNet. “I believe it was genocide.”

In recent years, there has been increasing curiosity about the Urkun. For the past decade, Kyrgyzstan’s National Revival Party has been organising expeditions to the mountains around Lake Issyk-Kul to collect the remains of those who perished in the exodus. A memorial for those who died was also erected in 2006.

“We can call Urkun a genocide,” National Revival Party Chairman Doolot Nusupov said at a service held for the victims in August 2015, putting the death toll at 150,000 people. “After fleeing from the persecution, people died of hunger and cold.”

The leader of Kyrgyzstan’s Ak Kalpak Party, Ulukbek Mamataev, meanwhile called for more efforts to collect the bones that litter the Bedel Pass. “If we can not bury the remains of their ancestors, to respect their spirits, then the next generation will never respect us,” he said, adding that the incidents were an “extermination” by Tsarist forces.

The effort to clean up the sea of bones will no doubt take a number of years, but it seems highly unlikely that the Urkun will be defined as a genocide any time soon. Nonetheless, a century of efforts to wipe out all memory of the incident from the minds of the Kyrgyz people have been futile. Although many prefer to ignore the past in order to maintain the status quo of the present, a growing minority refuses to let the deaths of their ancestors go in vain and hope to transform their legacy into a symbol of struggle for future generations.

The Republic of Kiribati and the Revival of the Romanovs 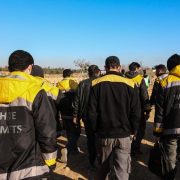 Syria and Siffien – Thoughts on the Repetition of History 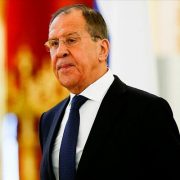 Lavrov: US’s assassination of Gen. Soleimani was a flagrant violation of international law 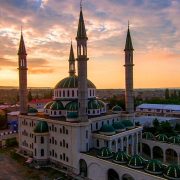 Russia: Grand Mosque of Karachay-Cherkessia to open next year
0 replies