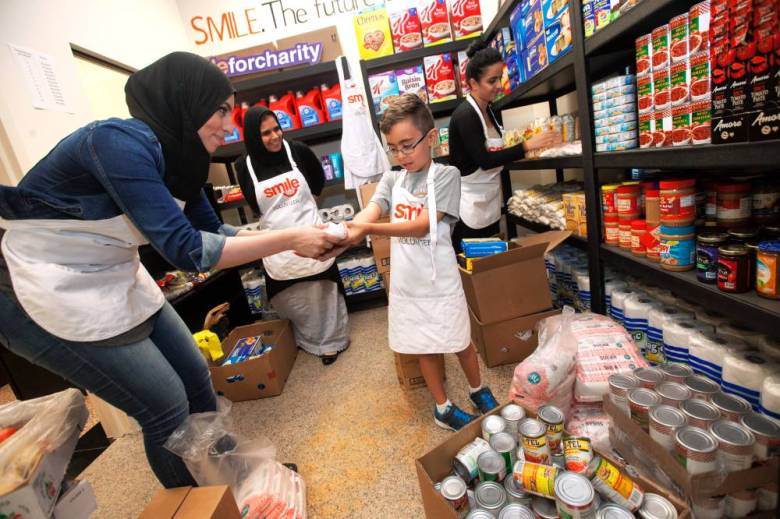 SHAFAQNA – Dozens of volunteers gathered around tables at a warehouse in Clifton tucking boxes of dates, 10-pound bags of rice and jugs of imported olive oil into boxes that would be delivered personally the next few days to 350 families across New Jersey and New York.

The boxes, given to Muslim families during their holy month called Ramadan, have become an annual tradition — one that was started by a couple of friends eight years ago, including Passaic resident and school board member Salim Patel.

Patel, 37, said he and his friends had watched their parents in the U.S. work hard and send money to families and poor people back in their native countries. But feeling a personal connection to their own communities, they wanted to help at home in North Jersey.

“We live here and are rooted here,” said Patel, a financial planner. “Our friends and family are here and we have come across people and individuals who are suffering from poverty and we wanted to help.”

Patel and his friends, Tariq Hussein and Haris Mahmood, reached out to their friends and family for support. They gathered enough capital and resources to launch a charitable non-profit, and The SMILE Organization was born.

SMILE is not affiliated with any religion, but it is inspired by Islamic teachings that emphasize charity as part of a faithful life, a cause that Muslims see as especially important during Ramadan, the holy month that ends Tuesday with the Eid al-Fitr holiday. During Ramadan, observant Muslims fast from sunrise to sunset while focusing on piety, sacrifice and alms for the poor. From childhood, Muslims are taught that spiritual rewards are multiplied for giving and good deeds during Ramadan.

With local support, SMILE has grown enormously from its origins and is marking its five-year anniversary. Based in a storefront office on Hoover Street in Passaic, the charity now includes a food pantry, diaper bank, and social services agency. The organization has six part-time staff, two full-time staff and an army of volunteers, who help with everything from legal aid to stocking shelves.

The food pantry serves 1,200 people each month. It is one of just two food pantries in the city of Passaic and the only “choice” pantry in the county — meaning that people can choose the items they want to receive. That helps families with food restrictions, including those who eat only halal food — prepared according to Islamic law. Others, who are homeless, may want items that don’t require cooking, said Meher Mohsin, the director of operations and development.

Many of their clients are Muslim, including refugee families, who have heard about the services by word of mouth and who feel comfortable there.

SMILE also gives out diapers, baby food and formula and gets referrals from hospitals for that purpose. It does outreach in parks to the homeless to connect them with their services and their pantry.

The organization is launching several new projects in the next few months:

* With a $20,000 grant from the Robert Wood Johnson Foundation, the organization plans to retrofit corner stores and bodegas enabling them to carry fresh fruits and vegetables and become eligible under food benefit programs from the government.

* With a $10,000 grant from Lush Cosmetics, SMILE will host an art therapy program for refugee children, and has plans to open a thrift store staffed by refugees as early as August.

* The organization expects to launch a mobile food pantry that would be parked at 81 locations each month on weekends. The $35,000 van recently was donated by Honest Chops Butchery in New York City.

“We have great support,” Mohsin said. “We are doing comprehensive work here trying to create a shift in the community to end poverty.”

The work has not gone unnoticed. Passaic Mayor Alex Blanco visited and volunteered on June 4 and the city issued a proclamation in May recognizing the organization’s five-year anniversary.

Mohsin also is active on the Passaic County Food Policy Council, a group of leaders from community and government organizations and charities that works to provide residents with access to affordable and nutritious food.

Muslim Americans volunteering in towns and cities can have the effect, even if inadvertently, of countering negative stereotypes about people of their faith, one of the directors said.

“Out there in the media, we are in the spotlight in a negative way,” Sinah Ghannam, 27, the food pantry coordinator, said about Muslims. “For them to see we are there and helping the community, Muslims and non-Muslims as well, it is something good for them to see and to be part of.”

Ghannam said about half of the group’s volunteers are non-Muslims.

Zahid Bukhari, executive director of the Center for Islam and Public Policy, a research center in Washington, D.C., said Muslims became more active in political and civic life after the Sept. 11 attacks, in response to rising prejudice and misunderstandings about their faith. Many Muslims immigrated in a wave starting in the mid-1960s but have become active in American issues at a faster rate than other immigrant groups, he said, taking part in disaster relief, food pantries, women’s shelters, charities and interfaith outreach.

Patel said charity work done at SMILE is not about public relations or proselytizing.

“It’s because it’s a mandate in our faith tradition,” he said. “Helping people is part of our faith.”