SHAFAQNA – The following was made available to Shafaqna by the Neturei Karta, a Jewish association which has campaigned for the rights of Palestinians, and renounce Zionism as the negation of Judaism.

A fascist political construct which basis is rooted in ethnocentrism and sectarianism, Zionism stands in opposition of Judaism, just as Wahhabism negates Islam true teachings.

It is important today that we offer support to the Neturei Karta. For all the many times members have answered the calls of their Muslim brothers, it is down to us today to show solidarity and support.

If we stand true to the banner of the Prophet Muhammad, if we are indeed of the Shia of Ali, then injustice is our fight, truth is our voice, and courage will be our coat of armour.

Israeli police attacked a crowd of over 1000 peaceful demonstrators outside a courthouse in Jaffa on Sunday, July 3 as they protested the imprisonment of Yosef Shlomo Levy, age 20. Levy was jailed two weeks ago for refusing to respond to a draft notice. The police used brutal riot control methods usually reserved for violent protestors, such as tramplingwith horses and vicious beatings.

Seven of the protestors, including Rabbi Leibel Deutsch of Jerusalem, were arrested. On Monday, five of them were released, as the police realized that no charges could be brought against them.

Since the State of Israel was founded in 1948, the majority of Orthodox Jews have consistently refused on principle to serve in its army. This refusal is based on their opposition to the existence of the state itself and their religious conviction that the Jewish people should not be involved in military operations.

Since the passing of the 2014 law mandating the drafting of the Orthodox, opinions in the Orthodox community have been divided as to whether to cooperate to any degree. Some maintain that young men should enlist at army offices but obtain an indefinite deferment. Others advocate no compromise whatsoever – no enlistment and no response to draft notices.

“Usually the government does not arrest those refusing the draft for religious reasons, for fear of large-scale public protest,” said Rabbi Meir Hirsch, an activist involved in the case. “In the case of Yosef Shlomo Levy, an orphan from the Sephardic community, they apparently believed that no one would come to his defense. That’s why it’s so important for us to be out there.

“None of the demonstrators knew the imprisoned young man personally, yet everyone felt solidarity with him as a fellow Jew suffering unjustly. Their heartfelt cries and prayers had a profound effect on the local residents of Jaffa, secular Jews and Arabs alike. One Arab kindly opened his home to the demonstrators to use the restroom and sink,” Rabbi Hirsch related.

Levy faces an 18-month sentence if convicted. His trial was to take place Sunday, July 3, but was postponed to July 10 due to the protest.

The anti-Zionist Jewish community of New York is planning a solidarity protest this Thursday, July 7. 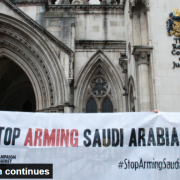 Will EU adhere to its "Common Position" for selling arms to Saudi Arabia? 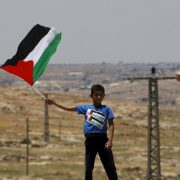